This is the second post just this morning fighting to overturn a law based on Alito’s wording in the Roe ruling that laws that are not historically long term in the laws of the US then it is not a right.   Basically if the founders did not make it a right then it is not a right.   Which means that every right bassicy has to be an amendment to the constitution because even if congress passes a law it is not historically a law so not constructional if the 6 religious zeloate on the Supreme Court want to get rid of it or make it so.  That is why codifying Roe into federal law won’t work right now, the six people ruling only on their view of what god wishes will simply say their god doesn’t want that so it has to go, they will rule it unconstitutional.     Alito wrote that ruling to clearly say that his interpretation of his gods wishes was paramount of what the law should read.  He wants to make his god happy, and so he will force you to make his god happy.   Make no mistake these 6 have decided that pushing their religion on the public is acceptable and desirable in the US.   Look at how they let that clearly illegal Texas bounty law on abortion stand simply because they wanted abortion to be illegal.  It had nothing to do with the law, just their wishes.    Hugs 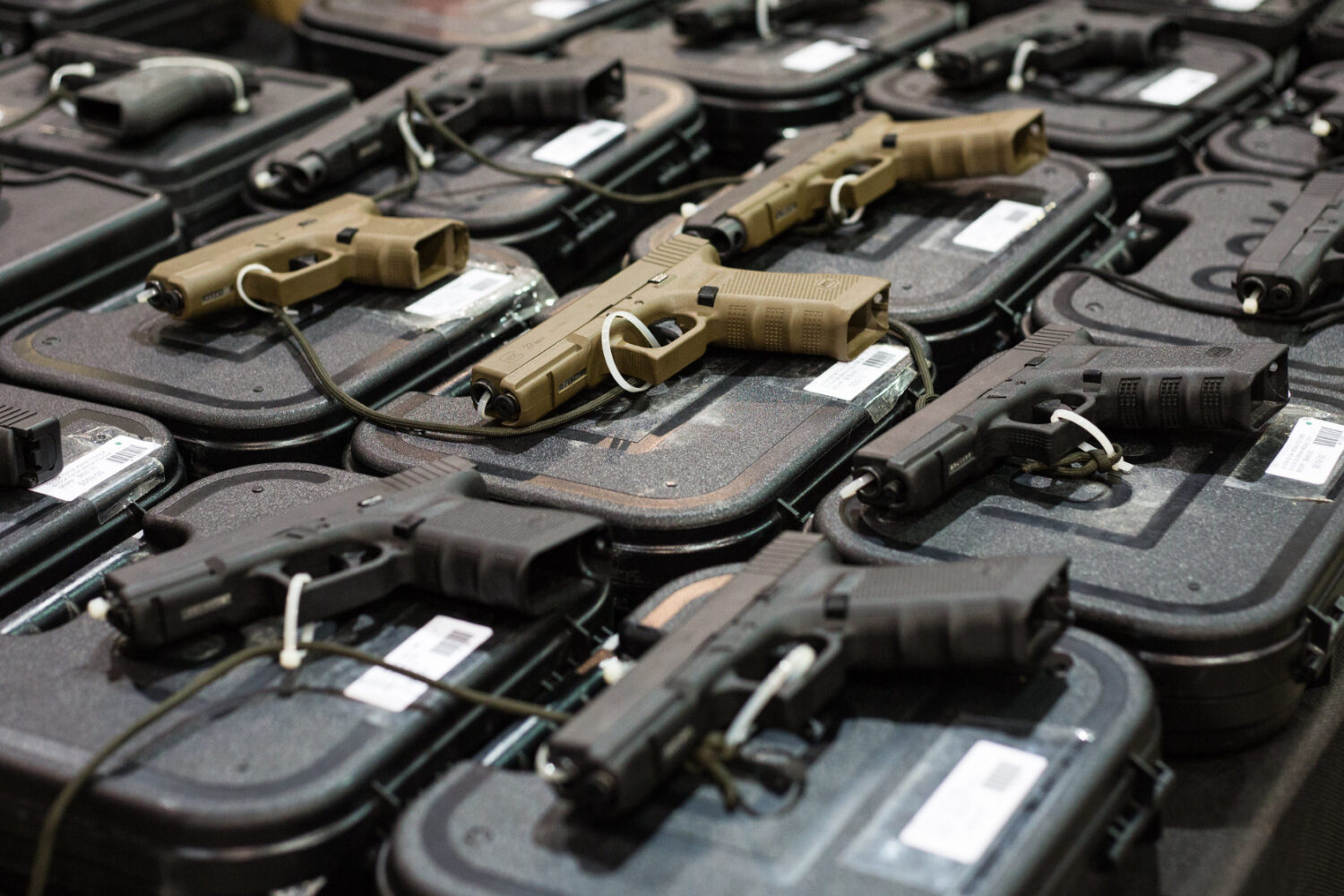 D.C.’s many restrictions on where people can carry concealed handguns may face legal challenges in the wake of a pro-gun Supreme Court ruling.

Three D.C. residents and one Virginia resident are suing D.C. over its prohibition on carrying concealed handguns on Metrorail and Metrobuses within the city, kicking off a legal battle spurred by last week’s Supreme Court ruling that raised constitutional questions about an array of limits on carrying guns outside the home.

In the lawsuit, the four plaintiffs say that many of the existing restrictions in D.C. on where concealed handguns can be carried — they include schools, universities, government buildings, stadiums, bars and restaurants, and more — are likely justifiable and constitutional, but the ban on carrying while on public transportation is not.

“There is not a tradition or history of prohibitions of carrying firearms on public transportation vehicles,” reads the lawsuit, which was filed by George Lyon, a D.C.-based lawyer with Arsenal Attorneys who has filed multiple lawsuits in the past over the city’s restrictive gun laws. “Public transportation systems did not exist as they do today at the founding of the nation. However, there was plainly a tradition of firearms carry when citizens traveled from their homes. In modern parlance, Americans carried arms to prevent their gatherings from becoming soft targets.”

The nod to American history is linked to last week’s 6-3 Supreme Court decision that overturned New York state’s strict limitations on who can carry a gun outside their home. In the ruling in New York State Rifle & Pistol Association Inc. v. Bruen, Justice Clarence Thomas broadly implicated many other limits on carrying guns, saying that governments will now have to show that their restrictions are rooted in the country’s historic traditions, and are not simply justified by a significant government interest.

That, Lyon told DCist/WAMU earlier this week, opened up new avenues to legal challenges to D.C.’s restrictive gun laws. “I think that there is definitely some room there for litigation,” he said, hinting that some of it would come from him.

In his opinion for the conservative majority, Thomas wrote that jurisdictions would still be able to prohibit the carrying of guns in certain “sensitive places,” including government buildings, polling places, and courthouses. But he also opened the door to legal challenges to carrying a gun in other places, writing that “expanding the category of ‘sensitive places’ simply to all places of public congregation that are not isolated from law enforcement defines the category of ‘sensitive places’ far too broadly.”

D.C., for one, prohibits open carrying of handguns and restricts where people with concealed-carry permits can go. Currently, someone carrying a concealed handgun cannot enter government buildings; schools or universities; polling places; libraries; hospitals; public transportation; stadiums or arenas; any business the serves alcohol; the National Mall, U.S. Capitol, and around the White House; or within 1,000 feet of a protest or dignitary who receives police protection. (There are roughly 4,000 people in D.C. with concealed-carry permits, split evenly between D.C. residents and non-residents.)

But in the lawsuit Lyon and his four clients argue that public transportation should not be considered a sensitive place where the carrying of guns can be prohibited.

“The broad consensus of states regulate schools, courthouses, and most government buildings as sensitive locations” where guns cannot be carried, says the lawsuit. “Hospitals, polling stations, colleges and universities, sports stadia and events, and certain outdoor recreational locations are often treated as sensitive locations as well. But there does not appear a tradition to treat public transportation facilities as sensitive.”

Lyon is asking a federal judge to overturn D.C.’s ban on carrying handguns on public transportation.

Litigation of this sort — some of it filed by Lyon — has largely shaped D.C.’s existing gun laws, as well as the legal landscape nationally. Most prominently, the city’s longstanding ban on handguns led to the Supreme Court’s 2008 Heller decision, which declared an individual right to own a handgun and pushed the city to allow handgun ownership. Six years later, a federal judge overturned the city’s ban on carrying handguns outside the home, and a subsequent ruling declared that D.C. couldn’t require residents to show a good reason to carry a concealed handgun. D.C. officials opted not to appeal that ruling, fearing a Supreme Court ruling just like the one handed down last week in response to New York’s restrictive good-reason law.

The ruling authored by Thomas has again reshaped the legal debate over gun restrictions, with advocates on both sides of the debate conceding they do not know what the future holds in terms of litigation and court rulings.

In a concurring opinion, Justice Brett Kavanaugh said the ruling doesn’t target the legal standing of existing requirements that states and cities may impose for letting someone carry a gun, like requiring payment of fees, training, and background checks — all of which D.C. has on the books. But the conservative majority’s ruling also said that some requirements could be challenged.

“[B]ecause any permitting scheme can be put toward abusive ends, we do not rule out constitutional challenges to shall-issue regimes where, for example, lengthy wait times in processing license applications or exorbitant fees deny ordinary citizens their right to public carry,” it reads. (In the Heller II case in 2015, the U.S. Court of Appeals for the District of Columbia Circuit tossed out certain portions of the city’s registration requirements, while keeping others.)

“Maybe the D.C. regulatory regime is vulnerable after all,” mused Randy Barnett, a Georgetown University law professor who has a concealed-carry permit in D.C., in an analysis published on SCOTUSblog this week.

Lyon also told DCist/WAMU there may be interest in challenging D.C.’s prohibition on assault weapons and extended magazines. In the past, courts have upheld the city’s ban on assault weapons, but Thomas’s new requirement that gun restrictions comport with the nation’s historical traditions could change the calculus. And on Thursday afternoon, Lyon filed a separate lawsuit challenging D.C.’s law that limits how much ammunition people can have when they carry a concealed handgun; one of the plaintiffs is Dick Heller, namesake of the 2008 Supreme Court ruling.

Gun control advocates have broadly decried the court’s ruling and the impacts it may have. “The court has chosen to obstruct Americans from obtaining the common sense laws they want and need to protect their families and communities, a decision that defies centuries of gun regulation,” said Brady United in a statement last week.

D.C. officials have been similarly critical of the decision, saying it could hamper the city’s efforts to combat gun violence. Attorney General Karl Racine’s office declined to discuss any possible repercussions on the city’s gun laws from the court’s ruling, but said in a statement that it would fight any pro-gun litigation in court.

“OAG will continue to defend the District’s common-sense gun regulations and keep District residents safe,” it said. “As the Supreme Court said, the Second Amendment is not a license to keep and carry any weapon in any manner for any purpose.”

This post has been extensively updated to include the lawsuit filed against D.C. over its ban on carrying guns on public transportation.

3 thoughts on “In Wake Of Supreme Court Gun Ruling, D.C. Gun Owners Sue To Be Able To Carry Concealed Handguns On Metro”