Told you this was coming.    It is all about driving public opinion that there is something wrong and bad about LGBTQ+ people / kids.   They should be around normal good kids.   Drive them back into hiding.   Regress the country to the 1950s.  This was not about teacher talking students into be gay or trans.    It was about demonizing and attacking the gay and trans kids.     Hugs 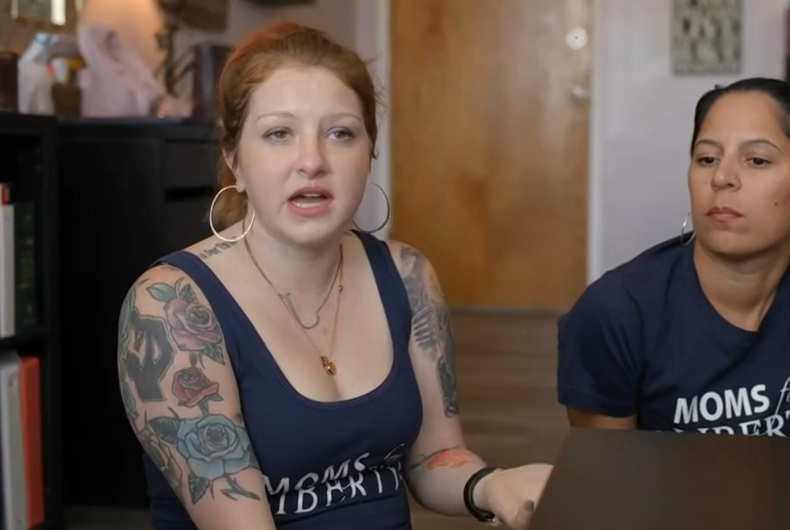 An anti-LGBTQ Moms for Liberty activist told MSNBC that she believes LGBTQ students should have separate classes from straight and cisgender students in schools.

Field Report with Paola Ramos aired last week and discussed the rightward movement among Latino voters, especially in Florida. Ramos met with a group of Moms for Liberty activists.

Moms for Liberty gained notoriety during the pandemic as they attended and protested school board meetings to oppose mask mandates and LGBTQ inclusivity in schools. The group’s past exploits include offering bounties for people who turn in teachers who discuss “divisive topics,” attacking the Trevor Project for trying to prevent LGBTQ teen suicide, trying to get a book about seahorses banned for being too sexy, and saying that two girls briefly kissing at a school function is “lewd” and “traumatic.” The group lobbied in Florida for the Don’t Say Gay bill.

“The kids that do have their, you know, they’re confused, or they are gay or whatnot,” said Moms for Liberty Miami-Dade member Crystal Alonso, “that the way they’re trying to go about it is to make it an open conversation and an open thing in classrooms.”

“But like for example children with autism, Down Syndrome, they have to have special IP meetings with a counselor, they have to be put into separate classrooms. I understand, because it’s a different type of education for children with those disabilities, but I think that for children that identify differently, there should also be like a specialized… something for them, so that they feel that they’re important enough that they’re being counseled.”

Ramos pushed back and suggested having that conversation “in front of everyone.”

“I think for the same reason why teachers wouldn’t just bring a child with autism in front of the class and be like, hey, he’s got autism,” Alonso responded. “Embarrassment….”

“What is, in your eyes, embarrassing about being gay?” Ramos asked.

“It’s not that it’s something to be embarrassed about, but you, I mean, I’m sure that you understand a lot of kids that are young and feel gay, some of them are shamed,” Alonso said.

“Because they can’t openly talk about it in their classrooms,” Ramos said.

“Right, which I understand, but there’s just a way to go about it so that everybody is respected.”

Later in the show, Moms for Liberty Miami-Dade chapter chair Eulalia Jimenez said that kids are being “influenced to be gay.”

“I believe that the gay community has felt invalidated and left out,” she said. “And, rightfully so, they want their place.”

“But again, why does this need to be imposed on young children?”

Members of Moms For Liberty, the group actively banning books across the country, terrorizing queer kids, and taking over school boards, calling for LGBTQ kids to be put in separate classrooms “like kids with autism and Down syndrome”. https://t.co/7skrbxFghW