This kind of hate is created by those including right wing media, right wing Christian hate preachers, and republicans in office that are demonizing the LGBTQ+.   By constantly shouting into the ears of their faithful / viewers that gays are molesters, groomers of children, sexually abusing your child, that the trans / gays are recruiting your child, that teachers are indoctrinating your innocent kids into sexual experimentation and orgies … all this and so much more vitriol that the right is spewing just incites this kind of stuff.   Is this what you pay your elected officials for?   Is this what you want your religion to be known for? 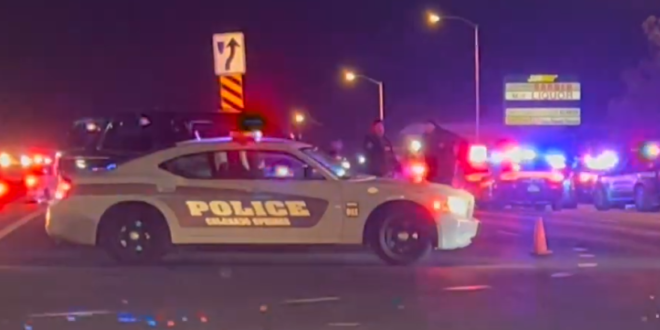 At least five people were killed and 18 injured late Saturday in a shooting at an L.G.B.T.Q. nightclub in Colorado Springs, the police said early Sunday morning.

Lt. Pamela Castro, a public information officer with the Colorado Springs Police Department, said at a news conference outside the nightclub, Club Q, that the investigation was only beginning and that the number of victims was subject to change. She added that the victims had been taken to multiple area hospitals.

Police officers had entered the club overnight as they responded to reports of the shooting and located “one individual believed to be the suspect inside,” Castro said.

She said the casualty toll “is subject to change as the investigation continues,” adding that ambulances and police had transported “numerous people” to hospitals. The hospitals are helping to notify families of the victims, she added.

Capt. Mike Smaldino, spokesperson for the fire department, said 34 firefighters and 11 ambulances were dispatched to the scene to help quickly move people to hospitals.

The club was reportedly planning to hold a drag brunch today to mark the Transgender Day of Remembrance.

There was a mass shooting at my job tonight. I am alive. Please pray for my community. #coloradosprings #clubq

#Breaking: Colorado Springs Police first got the call around 11:57pm for a an active shooter at Club Q. Again, they confirmed five dead and 18 injured. They are taken to local hospitals. The gunman was injured in this. Not sure if by police or civilian. pic.twitter.com/cpcIhSfWzZ

There will be a 8am news conference at the Police Operations Center about the Club Q shooting. #ClubQ

#ClubQ was hosting a drag night on Saturday night, and an all-ages drag brunch was planned for today.

Matt Walsh, Libs of TikTok and every shitheel who scaremongers for money or attention has blood on their hands. pic.twitter.com/srKXvAAjpw

Is it any coincidence that Colorado Springs is one of the most conservative cities in the nation? I’m guessing not.

Not just conservative. It is a hotbed of evangelicals, like Ted Haggard, and is also where the evangelicals work to make sure the Air Force academy there stays rigidly Christian.

Bilderbeck • an hour ago

Focus On The Family and New Life Church are HQ’d in Colorado Springs.

Ragnar Lothbrok • an hour ago

Probably heard there may have been some drag queens or a possible trans person there, and it was time to do something about it.

As that message is constantly brayed to them. Time for the 2cd and first to be amended.

HanyBaal • an hour ago • edited

$50 million was spent directly by the GOP to vilify queer ppl this election cycle. This is only the beginning.

“Playground bullies all grown up.'”

J.Martindale • an hour ago • edited

Waiting for words of condolence from DeSantis for the victims. Of course, the politicians trying to protect the children from grooming who used gays as scapegoats for their political ambition had absolutely nothing to do with this sad, sad occurrence.

Dirac Majorana • an hour ago

They want us to live in fear. There’s no way to “ethnically cleanse” gay people from anywhere. Now another murderer is about to be purged from society. We still exist. He will get to write hateful manifestos from prison, but society will still have gay people because we will refuse to live in fear.

Gay kids will still be born, and we will be here as long as there are people, we’ll remain. He will not change that fact. We will still love each other, but no one will remember or love him.

weshlovrcm • an hour ago • edited

The far-right fascist QAnonGOP and Nazi scum are doing all they can to silence and cancel lgbt Americans! Of course the motive will turn out to be homophobia and/or anger at the drag brunch due to radicalization by far-right fascist social media.

The media are partly to blame, but a lot of the media are merely reporting what the goddamned rethugs are doing with their don’t say gay tirades, grooming crap, and transphobia. It is just a game for those bigots. Part of their attempt to encourage homophobia to garner votes.