These people want the authority to deny rights to others they don’t like based on the nebulous idea of their religion.   No one says they cannot worship as they want, but we are saying if they want to have a business serving the public they need to serve the entire public.  They want the right to say my god hates … so I can not only hate them but deny them services also, which civil rights laws were passed to prevent.  No one says they have to open businesses that deal with marriage, or that they have to open public businesses.   This is being pushed by the very idea that some people don’t have a right to services sold to others in the community.   This is simply a way to expand their religion / religious authority into the daily public life of the country.   They want to expand their religious authority into all aspects of peoples lives.    Hugs 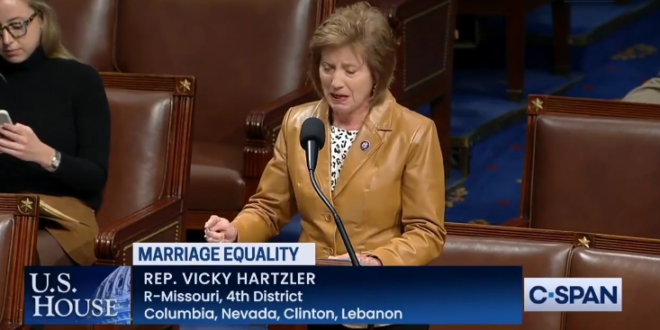 “And no protections for civil servants that justly believe marriage is between a man and a woman. The bill’s implications: submit to our ideology or be silenced.

“This is yet another step toward the Democrats’ goal of dismantling the traditional family, silencing voices of faith and permanently undoing our country’s God-woven foundation.

“This is the Democrats’ priority.” – GOP Rep. Vicki Hartzler, sobbing as she objected ahead of today’s final vote on the marriage bill.

Hartzler ran for the US Senate this year, finishing 23 points behind Missouri AG Eric Schmitt in the GOP primary. Schmitt then won the general election.

Hartzler says her priority is protecting people who believe in the true meaning of marriage and then starts to cry while she asks for her colleagues to vote against marriage equality pic.twitter.com/yk7loKCd4G

RELATED: Rep. Vicky Hartzler is one of the most vicious opponents of LGBT rights in the US House, which is saying something. She appeared on JMG in 2019 when she hosted ex-gay torture advocates in her office next door to Rep. Ted Lieu, who had just introduced a bill to ban the practice. That same year she publicly pressured Amazon to resume selling books by the now-dead Joseph Nicolosi, the so-called father of ex-gay torture. Before being elected to Congress, Hartzler headed the Missouri Coalition to Protect Marriage, which in 2004 backed the successful campaign to install a statewide constitutional ban on same-sex marriage. Hartzler has compared same-sex marriage to incest and pedophilia. In 2020, she was among the 146 GOP House reps who voted to overturn the presidential election.

“My entire identity is wrapped up in being shitty to lgbt people! What will I do if you take that away from me?”

Fortunately, voters took it away from her. This is her last teary hurrah in Congress.

John T Houndentenor • an hour ago

If gay marriage is legal, how will God know I’m a better person than you?!

Free speech means she’s free to be shitty to LGBTQ folks all she wants. She’s just pissed off that federal and state governments can’t be required to be shitty at a systematic and institutional level. Even though having to get married in a different state would absolutely be a burden on same-sex couples and a pretty blatant violation of equal protection. Which this corrupt SCOTUS could well tie itself into knots to allow anyway.

The issue that keeps coming up is that Catholic (and other religious) adoption agencies are being forced to treat all people fairly even if their interpretation of their religious teaching allows for bigotry. They could be bigots without state and federal funds but they don’t want that. They want the money. Religious are exempt except when taking federal (and in the rare cases of totally blue states, state) money. That’s the issue.

But no, they lie and claim that the government is going to force churches to marry gay couples which is a lie and they know it’s a lie. Lies are all they have because the truth is that they are bigoted monsters.

YES ! Another example of them feeling oppressed when others get the same rights as them.

“submit to our ideology or be silenced,” she sobbed, demanding that everyone else submit to *her* ideology.

When can I be protected from straight marriages?

Paula evanedwards • an hour ago

Right! Those marriages frequently end in divorces, breed unwanted children that get physically and mentally abused, and domestic violence.

Paula • an hour ago

Fuck off, Vicky. That was fake. It doesn’t affect you. Nothing has changed from yesterday. You are still allowed to hate, you just can’t do anything about it.

Mark Andrzejczak • an hour ago • edited

Cry more, snowflake. Why does a school need “protection” against recognizing a state-licensed marriage? Oh, right, it doesn’t; it’s just a poorly assembled and irrational smokescreen to cover for discrimination. Say what you mean: Your miserable life is so wretched that only oppressing and mistreating those whom you see as your “inferiors” makes you feel any better about it.

There is absolutely no change enacted in this legislation with regard to religion. The only significance of this bill is, if Obergefell gets revoked:

1. The Defense of Marriage act is defunct.

2. People in states with laws prohibiting marriage equality will have to be inconvenienced and will need to go out of state to marry.

So you have made the lives of LGBT people more difficult, bitch. Enjoy the fruits of your homophobia, c*nt.

Actually it safeguards their protections if Obergefell and Windsor are overturned (which I expect soon).

Here’s the issue: they want that sweet government money but don’t want to follow secular rules to get it. They can discriminate all they want if they raise their own money. But now. They want tax dollars from the very people they will discriminate against. And this doesn’t just affect lgbt people. One of the religious adoption agencies recently turned away a Jewish couple. They are bigots and they want OUR tax dollars to pay for their bigotry. They aren’t charities. They are faux government agencies. Cut them off!

I don’t think that religious groups should be running ANY kind of public service, like hospitals and adoption agencies.

Houndentenor What, me worry? • an hour ago

They can run them all they want. They just shouldn’t be getting any money from the government, including medicare and medicaid, unless they agree to abide by nondiscrimination rules.

Gustav2 • an hour ago • edited

Now if you are a social service provider receiving tax dollars, you need to take care of citizens WHO ARE PAYING YOU.