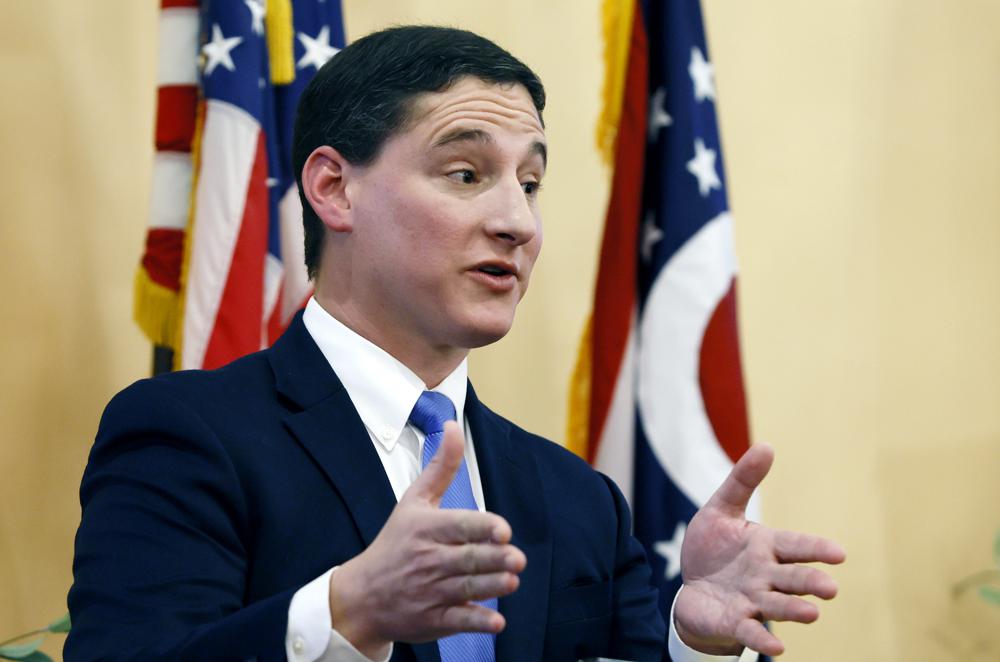 Before digging into his six-egg omelet at a bustling northeast Ohio diner, Republican Senate candidate Josh Mandel stopped to bow his head.

“Bless our food, our time, our conversation, in Jesus’ name,” said Pastor J.C. Church, who joined Mandel after a campaign event at a local church. ”Amen.”

The scene encapsulated Mandel’s campaign strategy as he competes in a crowded field of Republican contenders ahead of Ohio’s May 3 primary. He is a Jewish candidate who makes no secret of his faith, but who is centering his campaign around evangelical churches as he tries to win over religious, conservative voters.

“Usually, when someone’s running for U.S. Senate or governor or Congress, they’d go to all the Republican rubber chicken dinners and clam bakes and hog roasts, stuff like that,” Mandel said in a recent interview between campaign stops. “We’re blowing up the playbook. I’m sidestepping all of the Republican Party groups and, instead, I’m running a campaign through churches.”

Indeed, Mandel’s campaign is steeped in Christianity. His website features a picture of a cross and an American flag. He pledges to make decisions in Washington with “the Bible in one hand and the Constitution in the other.” And he holds most of his campaign events at evangelical churches.

Raised in the Cleveland suburb of Beachwood, Mandel is the grandson of Holocaust survivors, attended B’nai B’rith Perlman summer camp and was married in Israel. His children are enrolled at a modern orthodox Jewish day school where they study Torah half the day.

Mandel describes himself as a “proud Jew” and dismisses those, including some GOP primary rivals, who have portrayed him as insincere in his emphasis of conservative Christian values.

Some critics say they’re more concerned with Mandel’s history of controversial statements. He was briefly kicked off Twitter after running a poll on which “illegals” would commit the most crimes, “Muslim Terrorists” or “Mexican Gangbangers,” and has characterized Black Lives Matter protesters as “thugs.”

The Rev. Tim Ahrens, senior minister of the First Congregational Church of Columbus, said Jesus dedicated his life to caring for those who had been forsaken and forgotten, “so to use his name to further divide people is really sick.”

“The problem that I have is when you literally take what is the Christian faith and turn it into a political campaign, it’s abusive of the faith,” he said.

Still, Mandel’s alliance is part of a broader shift in U.S. politics, with Republicans like former President Donald Trump working to win over conservative Christians by aligning themselves with pro-Israel policies. With Jewish Americans overwhelmingly voting Democratic, according to Pew Research Center, some conservative Jewish groups have banded with white evangelical Protestants — who are more likely than Jews to favor stronger U.S. support for Israel — to form new allegiances on the right.

It’s unclear whether that shift will benefit Mandel. In a major blow to his campaign, Trump endorsed rival JD Vance on Friday.

Mandel sees no contradiction between his faith and his campaign approach.

At his events, the boyish Marine veteran often introduces himself by telling the story of how “courageous Christians” sheltered his grandmother during the Holocaust, saving her life. And he explains that, when it comes to his support for Israel, he often has more in common with evangelical Christians than he does with liberal Jews.

Mandel touts his opposition to abortion and a belief that “there is no separation between church and state,” signaling a willingness to support policies such as prayer in public schools and permitting private businesses to turn away customers based on their religious beliefs.

“You know, people want faith instilled in the classroom, in the workplace, in all aspects of society,” Mandel said.

Fred Zeidman, a longtime GOP donor and Mandel supporter who worked on Jewish outreach for multiple Republican presidential campaigns, noted that evangelicals are among the party’s most consistent voters.

“If you want to win an election, you’ve got to go where the voters are,” he said. “So I think it’s essential for him, if he wants to win, that he lets the faith-based community know that he thinks like they do. He doesn’t think like 80% of the Jewish community that votes Democrat no matter what.”

The strategy has also garnered him attention. In a world where tweets equal visibility for a politician, Mandel’s particular take on religious topics gained him more than 27,000 mentions on Twitter from October to December — more than religion-related mentions for all other candidates, Republican or Democrat, combined, according to an analysis for The Associated Press by Zignal Labs.

Stephanie A. Martin, a professor of communications at Southern Methodist University in Dallas, said Mandel’s embrace of Christianity may serve to neutralize worries among Republicans about his Jewishness in a country where antisemitism is still a potent force.

When Mandel describes his platform as protecting “the Judeo-Christian bedrock of America,” he is invoking what scholars term “founders rhetoric,” she said, which creates “a kind of narrative logic that positions evangelicals as the rightful heirs and the rightful defenders of authentic American values.”

“It’s a very smart way to orient around a shared understanding of the founding narrative and what it means to have a traditional outlook on what the country means,” she said, noting that vision leaves little room for versions of history that aren’t white, patriarchal and Christian.

Some of Mandel’s longtime Jewish friends and supporters described feeling out of place when they first attended his events. But they said they came to see the evangelicals as a natural base of support for Mandel, given their shared support for Israel, even if his efforts may make others in the Jewish community feel uncomfortable.

“I wouldn’t say it feels weird, but it definitely feels different. But a great difference,” said Yoel Mayerfeld, a longtime friend and supporter who lives in Mandel’s native Beachwood, which boasts the second largest Jewish population per capita outside Israel. Mayerfeld, who is Jewish, said he’d been to Mandel events where he’d met religious and evangelical Christians who share many of his values.

Rich Soclof, another Jewish Mandel friend and supporter, said he “was admittedly a little hesitant, not about the concept, but even what it’s going to be like when I got to this event.” But he, too, was pleasantly surprised, especially by the fact that Mandel has not tried to downplay his own religion.

“I love it. I can’t tell you if I would have loved it 10 years ago,” he said. “He’s finding this synergy, in a creative way, by ’running it through churches’ and being embraced by them.”

Mandel says “there is no separation between church and state” and supports prayer in public schools and letting businesses turn away gay customers. “You know, people want faith instilled in the classroom, in the workplace, in all aspects of society.” https://t.co/acmlJZrQOg

.@JoshMandelOhio on one nuance of U.S. politics: