I watched this this weekend watching the Sunday morning news shows.   I live in North Fort Myers, next to Cape Coral.   I had to take three days off from the news.   I tried to come back to it yesterday, but it still was too much.  Making a fresh stab at it today, word choice deliberate.   This is a 10 year old boy.   The police / sheriff’s departments in Florida are militarized.  They treat the public as if they are all criminals to be ruled over.   If you are not white you are screwed.  This wouldn’t have happened to a little white boy.    But here was a 10 year old that made a text (or maybe a couple) to a friend of a pile of cash with four assault weapons and wrote “Get ready for water day” with a funny emoji”.

Have people lost their minds!   Because Republicans refuse to address the real issue of mass shootings such as Canada is doing, we get this from the Sheriff’s office. <blockquote> “Right now is not the time to act like a little delinquent. It’s not funny. This child made a fake threat, and now he’s experiencing real consequences,” said Sheriff Carmine Marceno. </blockquote>

Seriously a 10 year old makes a stupid statement because he wanted attention and figured it would be cool needs a talking to and some punishment like an essay to understand what he did wrong.   Giving him a criminal record when his brain has not yet figured out how to kiss yet is horrific.   He did not have the guns and had no ability to get them.   Think on that.   No ability to get them.   He could have said he was going to drive a Ferrari to school also, would they have arrested him for that.    I am terrified the US is becoming a police state where kids’ lives don’t matter, adults’ lives don’t matter, the only things that matter to the Republican elected office holders is the money they get from big money donors that allows them to stay in power, and those big money donors only care about more profit.  People no longer matter in the US, money does.   Profit does.   Don’t have money, you don’t matter, go sleep under a bridge and starve to death.  Even the for-profit mega churches don’t feed or clothe the poor.  The Pastor needs more profit.  The state and federal government leave that job to the very poor people that have to band together to help the poorest among them.   The public has two roles in our society.  Buy things to make profit for businesses and work to make profit for the business.  If you cannot do either one you have no worth to the upper class and they want you to go away, get out of the way, but whatever you do don’t you dare cost them profit.   So a 10 year old starts in the school to prison pipeline because adults are freaking out and the right refuses to do what makes sense.  Give a little kid an arrest record so everyone will think the worst of him for life.   Hell let’s put him in prison now, why wait, that will show him not to say anything he had no idea of what would happen.    Shit I cannot deal with adults right now.   Look at this little kid!  Be adults!  Address the real issue and not ruin the life of a dumb kid.   Hugs

<blockquote> Sheriff Carmine Marceno said, “This student’s behavior is sickening, especially after the recent tragedy in Uvalde, Texas. Making sure our children are safe is paramount. We will have law and order in our schools! My team didn’t hesitate one second… NOT ONE SECOND, to investigate this threat.” </blockquote> 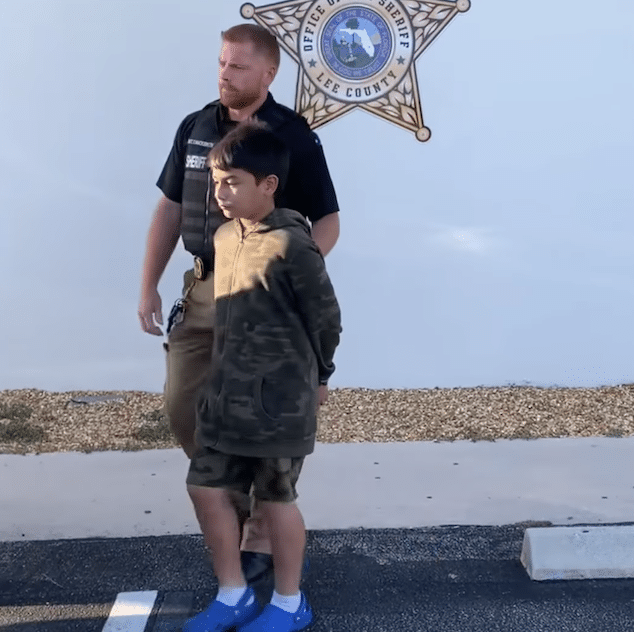 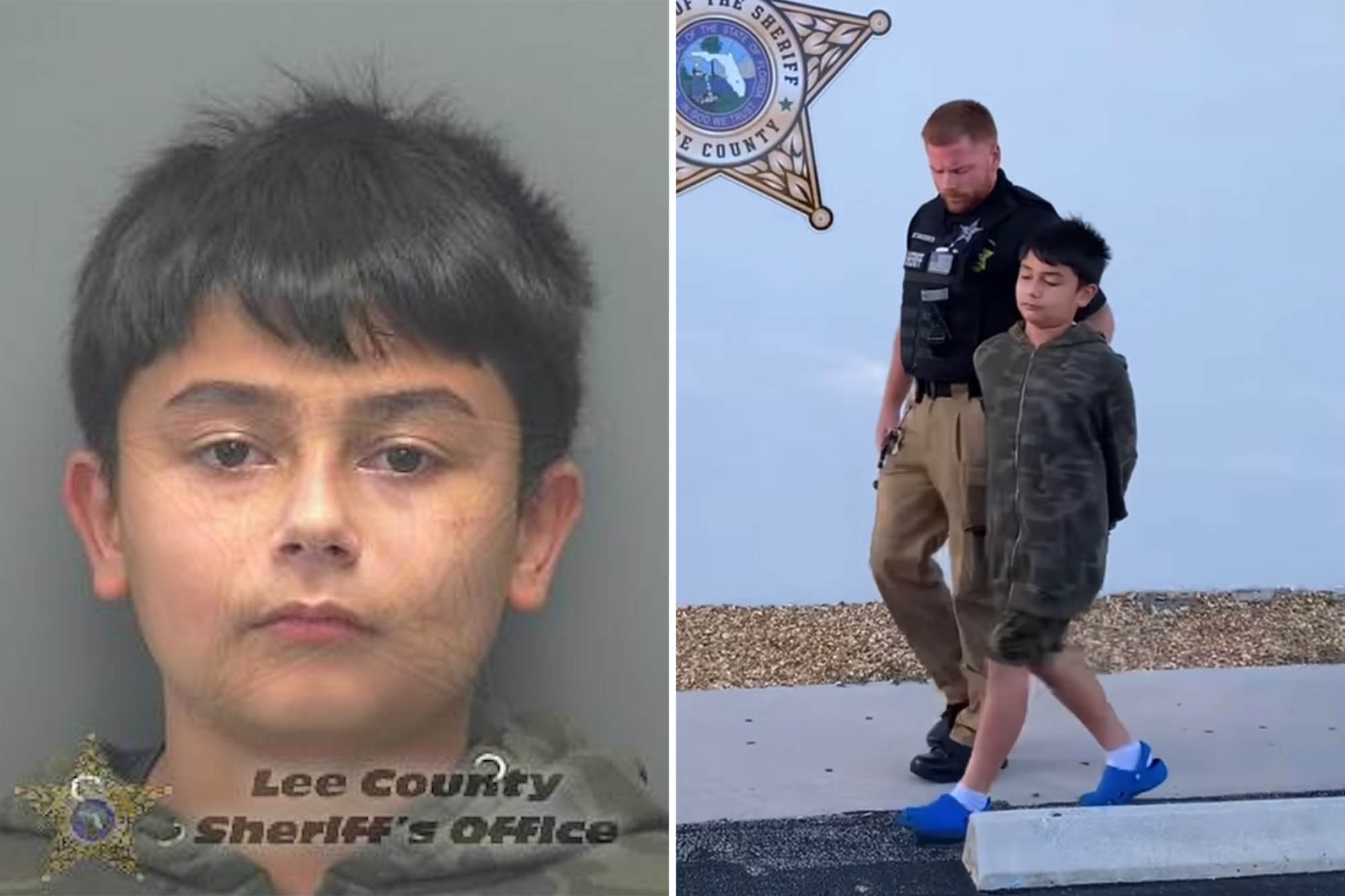 From the Lee County Sheriff’s Office:

On Saturday, May 28, 2022, the Lee County Sheriff’s Office learned of a threatening text message sent by a fifth grade student at Patriot Elementary School in Cape Coral. The School Threat Enforcement Team was immediately notified and began analytical research.

Due to the nature of the incident, the Youth Services Criminal Investigations Division assumed the case. Detectives interviewed the suspect, Daniel Issac Marquez (DOB 10/01/2011), and developed probable cause for his arrest.

Daniel Isaac Marquez was charged with Making a Written Threat to Conduct a Mass Shooting.

“This student’s behavior is sickening, especially after the recent tragedy in Uvalde, Texas,” Lee County Sheriff Carmine Marceno (R) said in a statement. Marceno, who brands himself as Florida’s “law and order” sheriff, said the boy who allegedly sent the threatening text message would face “real consequences.”

Marceno’s office also posted a video of a boy who appears to be the fifth grader walking out of the sheriff’s office in handcuffs. “Right now is not the time to act like a little delinquent,” said Marceno.

“It’s not funny. This child made a fake threat, and now he’s experiencing real consequences. Making sure our children are safe is paramount. We will have law and order in our schools! My team didn’t hesitate one second…NOT ONE SECOND, to investigate this threat.”

In the second video below from earlier this week, Marceno condemns federal aid to Ukraine that could have been spent on “hardening schools.”

Marceno was first elected as sheriff in 2020 after being appointed to then-Gov. Rick Scott in 2018 upon the retirement of his predecessor.

His “we are going to kill you” message below has gone viral on right wing sites. Expect this guy to run for Congress.

You don’t get to shoot our children. You bring deadly force in this county, we are going to kill you. pic.twitter.com/bYVnNT5FSl

The Lee County Sheriff’s Office works 24 hours a day, seven days a week to ensure the safety of our great residents. #lawandordersheriff pic.twitter.com/VIZWvJhmLb

That tableau is horrifying. What the everloving fuck is up with the whole Stormtrooper look in law enforcement now?

I take it we civilians are, at best, considered to be a militarily-occupied populace, and at worst, enemy combatants.

“They could have been shot”. That’s a quote from one of the leaders, explaining why they waited 78 minutes to go in.

“make up”? No, they just want to change the narrative. I read somewhere that there are more LEOs assigned to Florida schools than anywhere else in the country. And has that increased police presence resulted in ANY school shooting being stopped?

Could not agree more. I looked at that first photo and thought it was a still from Starship Troopers, with the Sheriff just photoshopped in.

And yes, it was the parents in Uvalde who were apparently considered the enemy combatants (at least one woman was handcuffed briefly, before she was able to run into the school and rescue her two children … while the police were busy harassing other parents … while the gunman was killing their children with no police obstruction for more than an hour).

If my local sheriff and his officers presented themselves like that at a press conference, I would seriously consider getting the hell out of Dodge.

What this child did was stupid, and possibly he meant it, but he’s a fifth grader and they released his name and pictures?? Would they have released all this if his last name was Harrington, and not Marquez?
WTF?

Yeah, the kid is 10 years old. What he did was incredibly stupid, but I would argue that most 10 year-olds are incredibly stupid in that they are both emotionally and intellectually immature. I’m not sure ruining his entire life serves any valid purpose.

It makes the police feel powerful

On Saturday, May 28, 2022, the Lee County Sheriff’s Office learned of a threatening text message sent by a fifth grade student at Patriot Elementary School in Cape Coral. The School Threat Enforcement Team was immediately notified and began analytical research.

And the publicity-hog of a sheriff immediately took action to make the story go national, thus inspiring who knows how many more troubled kids to seek attention this very same way.

JMG was right, you’ll see and hear a lot more from this sheriff. He’s jockeying for a political office and sooner than later.

Why are they disclosing his full name and DOB?

What he did is serious, but he’s 10 years old. Let’s get him some intervention. The sheriff is grandstanding.

Of course no one could have suspected that having a massacre every other week could led to fifth graders dreaming on the Internet of being powerful and waving guns around in their very own drama.

Yep. They’re definitely ready for miscreant 10 year olds. I assume all those weapons are loaded. Never know who’s sitting in the front row of one of those press briefings. Maybe even an 11 year old! They’re 10% more dangerous than a 10 year old.

This photo just proves to me America is broken and too many are invested in keeping it that way.

Again the CC is crap, but I looked for the stories elsewhere and did not see them.    Hugs

I love Texas Paul and his videos as he is informative and authentic.     I am posting this because the message that Texas Paul gives is an important part of the solution to these shootings.       Thanks.   Hugs

Hello Ali. Great points. What it comes down to is making the US schools a prison to send the kids to for 8 to 10 hours not for education, but so their parents can go to work to make profit for businesses. The kids will suffer in a stifling environment so the one problem that can be ignored is the love of easy access of guns in the US. And why is that easy access fought for and pushed, because it makes the gun industry a lot of profit. Thats the ask why three times answer. In the US it comes down to profit. People’s health doesn’t matter. Scared to go out in public, buy another gun to give the gun industry more profit because the politicians know we have to go out no matter how bad it is, we need supplies. We have to go to work. Kids have to go to school. But it doesn’t matter if some die. The profit must continue. We don’t have healthcare because it cuts into profits. We don’t have decent safety nets because it cuts into profits, we don’t have food or housing security in the US because it cuts into profit. The politicians and greedy wealthy owners of stock and companies don’t care because they know they won’t be shot, their kids won’t be shot, they won’t ever be hungry, homeless, in need. So they are humans in their minds, we are not, we are just to make them profit and disappear when we cannot function to make that profit anymore. And yes I am angry. Vote blue and vote progressives. Hugs

Some common sense things that might work like closing domestic violence loop holes and raising age to buy guns, along with shifting the idea of tactical clothing makes you a hero tough person, that carrying a gun makes you a man. Hugs