A Republican candidate for governor of Oklahoma has called for a total ban on abortion without any exceptions, while arguing that life begins “before” conception.

Mark Sherwood, an alternative medicine practitioner and former police officer, said on Thursday that he hopes to push a total abortion ban through the Oklahoma state legislature if he is elected. Sherwood is one of at least three Republican candidates hoping to unseat incumbent Oklahoma Governor Kevin Stitt when the state’s GOP primary takes place on June 28.

Sherwood, who was adopted, told Real America’s Voice host David Brody on a Thursday segment for The Water Cooler that his birth mother had likely been raped before giving birth to him. He suggested that abortion should be banned even for pregnancies that begin under the most “heinous” of circumstances, before citing a Bible verse to explain his belief that life begins “before” pregnancy.

“No life, even conceived in the most heinous or even less-than-ideal circumstances, is a mistake,” Sherwood said. “As I sit here and talk to you, I can tell you unequivocally, even the people that are pro-choice are not mistakes.” 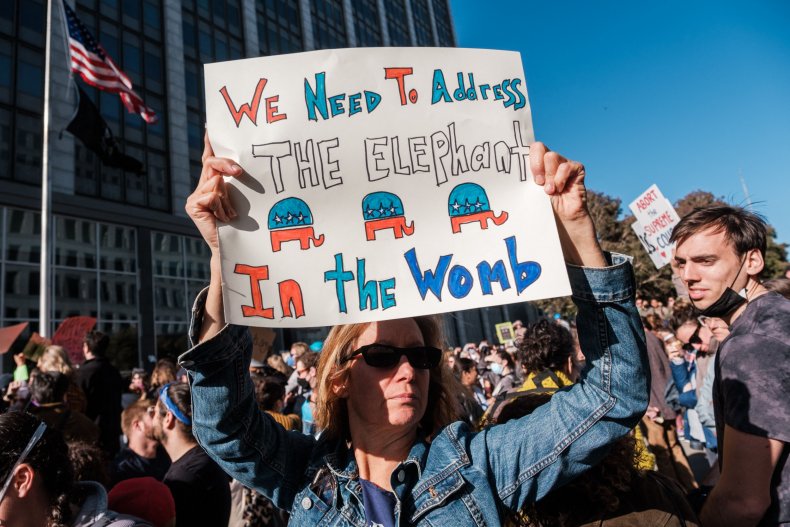 Republican Oklahoma gubernatorial candidate Mark Sherwood hopes to eliminate all exceptions to an abortion ban, arguing that life begins “before” conception. A person is shown holding a sign reading “were need to address the elephant in the womb” during a protest in San Francisco, California, on May 3, 2022.NICK OTTO/AFP/GETTY

“Everybody has a purpose,” he continued. “Jeremiah 1:5: ‘I knew you before you were created in the womb.’ So, I believe life begins in God before it begins at conception.”

On Wednesday night, Stitt signed into law what is already one of strictest anti-abortion rights bills in the country—banning the procedure from the time of conception in nearly every case, with exceptions for cases rape or incest reported to law enforcement and when necessary to save the life of the mother.

Sherwood pledged to go further if elected, eliminating all abortions and criminalizing the procedure as felony murder. He went on to concede that abortions would likely continue even if a full ban were to take place, while comparing unsanctioned abortions to the elementary school massacre in Uvalde, Texas.

“Evil is present in this world,” he added. “Is it going to stop abortion all the way, by people’s choices? No. But do we need to create laws that match the punishment, that match the crime? Yes. And if we do that, God’s hand of blessing will be back on this land.”

Sherwood’s hope of eliminating all exceptions to an abortion ban hinges on him first pulling off a primary upset over Stitt, who is far ahead in polling. The bill that Stitt signed on Wednesday is likely to survive any legal challenges due to the Supreme Court‘s expected upcoming reversal of Roe v. Wade.

Mark Sherwood, a Republican candidate for governor in Oklahoma, claimed that life begins "before" conception and that there should be "no exceptions" for abortions in the case of rape, incest or life of the mother. He wants more "punishment" for abortions. pic.twitter.com/6KVQpvYVR1