The new Florida and soon the whole country if the Republicans get their way.   Hugs 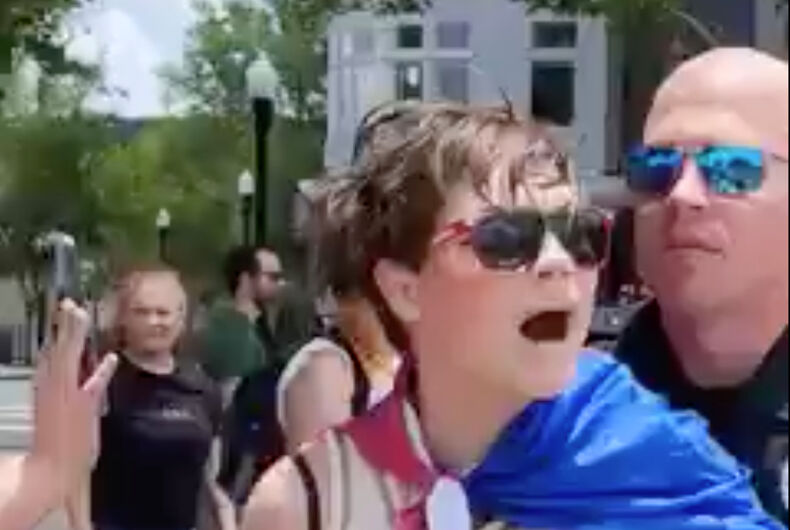 Video of a 13-year-old being arrested at a July 4 pro-choice rally in Lakeland, Florida went viral earlier this week.

The video, filmed and shared on social media by Rain Johnson’s mother Lauren Johnson, shows the teen draped in a bisexual Pride flag and holding a megaphone being led away by two uniformed police officers and loaded into a police vehicle. Lauren can be heard telling her child not to resist and assuring her that “mom’s right behind you.”

In the video, Lauren can also be heard demanding to know why the officers are arresting her child. According to NBC 6 South Florida, Rain was charged with a second-degree misdemeanor for a noise ordinance violation related to a new law that went into effect on July 1.

“She had a bullhorn, and she was screaming ‘my body my choice,’” Johnson explained in a TikTok video posted after Rain’s release. “When [the officers] came around the corner, they decided that they were going to, I guess, make her their target and arrest her.”

“It was very evident that I was her parent,” Johnson says in the video. “They could have easily handed me the [megaphone]. Instead, they chose to terrorize a 13-year-old.”

Attorney David Haas, who is representing the Johnsons, said that Rain was held for over an hour and was not allowed to see her mother. Johnson claims her daughter was questioned without a parent present.

“We don’t think that the megaphone is applicable to the ordinance and so we’ll be looking into that, about whether or not it was even appropriate for the arrest,” said Haas.

In a Monday Twitter post, Florida gubernatorial candidate Nikki Fried posted video of the arrest. “I need everyone to see what Ron DeSantis’ Florida really looks like,” Fried wrote. “13 year olds being arrested for protesting for their own freedom.”

According to The Ledger, Rain rejoined the protest in Lakeland’s Munn Park soon after her release. In her TikTok video, Johnson says she and her child will plan to attend another demonstration today. “We will be at the protest Thursday with a new bullhorn.”