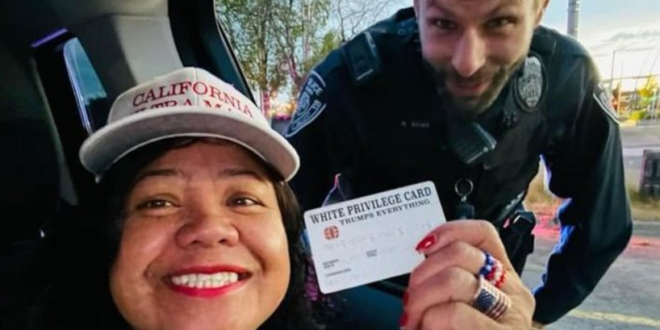 A Trump-loving Californian visiting Anchorage for a MAGA rally last month showed local police a novelty “white privilege card” after she was pulled over for swerving in her lane.

But instead of citing or ticketing the woman for failing to show her driver’s license, cellphone video taken by the motorist shows officers had a laugh, took a selfie with the woman, and let her go.

“You like my white privilege card?” the woman, Mimi Israelah, asked Officer Nicholas Bowe, while holding the card that reads “White Privilege Card Trumps Everything.” “That’s hilarious,” Bowe responds as his partner, Charles Worland, smiles next to him.

In a message posted to the Anchorage Police Department’s website, Chief Michael Kerle said he wanted, “to personally address the community to provide some clarity regarding [their] internal standards of conduct.”

“I know we are all human,” he said in the statement. “But we belong to a profession that does not tolerate, practice, condone, facilitate, or collaborate with any form of discrimination.” Deputy Chief Sean Case said some who saw the post had negative reactions and believed it was inappropriate. “We recognize that,” he said.

Worland and Bowe were placed on administrative during the 11-day investigation, Case said. Police would not provide additional information about the investigation, including which policies were violated and what, if any, repercussions the officers faced.

Two Anchorage police officers violated department policy when they did not ticket a woman who showed them a “white privilege card” instead of a driver’s license, Alaska newspaper reports. https://t.co/lO6TL0fRhD

The card said "White Privilege Trumps Everything." It got this woman out of a traffic tickethttps://t.co/ms2Xug4xZD