There must be no mention of the LGBTQ+ what so ever, especially in a positive way.   This is not about protecting little kids, that should be clear now.   The history of the LGBTQ+ people is inappropriate for the public to see.   Those people are diseased evil baby rapiers that eat human flesh, they are an abomination god wants killed.   What group will be next after they get rid of us?   Respecting someone enough to use the name and pronouns they ask is not to be tolerated, we must punish and destroy anyone different from the Christian ideal.      This is an open attempt to roll back the public acceptance and tolerance that the LGBTQ+ have earned over the decades, and return the country to before there was equal rights for minorities.    We need the entire voting public to understand what these people really want and will do.   As I will post in a few minutes, some of these people now want to forbid girls / women from wearing pants claiming that is crossdressing.     How much control do they want over every aspect of other people’s lives?    All of it.   They want to mandate acceptable clothing like the Amish or the Puritans, they want to make the handmaids tale a real thing.   This attacks on one group making them a scape goat has been done in recent history, 1930s Germany, we seen where that led to.    Hugs 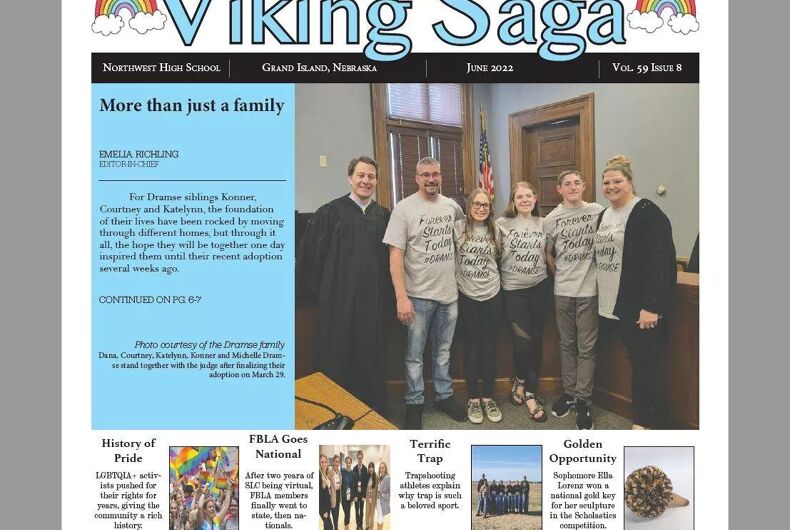 The final issue of the Viking SagaPhoto: Screenshot

A Nebraska high school has thrown the baby out with the bathwater.

School administrators eliminated both the high school newspaper and its journalism program following publication of the school’s year-end issue in May, which featured a story on the history of LGBTQ rights and editorials on LGBTQ topics.

Three days after distribution of Northwest High School’s Viking Saga, staff and students were notified of the paper and program’s elimination. Shortly after, the newspaper’s printing service and advertising contracts with the nearby Grand Island Independent were cancelled.

“The very last issue that came out this year, there was… a little bit of hostility amongst some,” Northwest Public Schools board Vice President Zach Mader said. “There were editorials that were essentially, I guess what I would say, LGBTQ.”

“There have been talks of doing away with our newspaper if we were not going to be able to control content that we saw [as] inappropriate,” Mader told the Independent.

“There [were] some things that were…” he said, referring to the final issue of the Viking Saga. “If [taxpayers] read that [issue], they would have been like, ‘Holy cow. What is going on at our school?’”

Board President San Leiser claimed that “most people were upset they were written,” referring to the articles about LGBTQ rights.

In addition to the controversy surrounding content, according to students, Saga staff was reprimanded in April after using preferred names and pronouns in the paper, and was advised by district officials to use only birth names.

Students defied the order for the final issue. They were censored and at least one trans student’s preferred name was replaced with his deadname before publication in the byline of his story.

“The [name] thing was the first big blow,” the trans student, Marcus Pennell, said. “It was the first time that the school had officially been, like, ‘We don’t really want you here.”

The school hasn’t provided an official explanation for the paper and program’s cancellation. Northwest’s 2021-2022 journalism teacher has remained silent.

Students and free speech advocates say the paper getting cancelled is a violation of First Amendment rights.

“In the Tinker case, the Supreme Court said that students and teachers don’t lose their First Amendment and freedom of expression rights at the schoolhouse gates,” said Harris. “We believe that that should apply to student journalists as well.”

“By far, the number one thing that will get student media censored is a story that criticizes the school or that administrators somehow think makes them look bad,” said Mike Hiestand, senior legal counsel at the Center.