In his spiel Tucker spews lies and states they are true even when he says others tell you they are lies.    He never mentions that these people are inciting terror and hate, instead he talks about their opinions as if it is something they are quietly keeping to themselves.  He is deliberately misinforming and mischaracterizing the situation just as a KKK person burning a cross on a black family’s lawn might claim to just be spreading Christianity, not trying to strike raciest fear into the black community.   See if you can spot the misdirection and slight of mouth he uses to compare apples to oranges as if they are the same thing.    Hugs 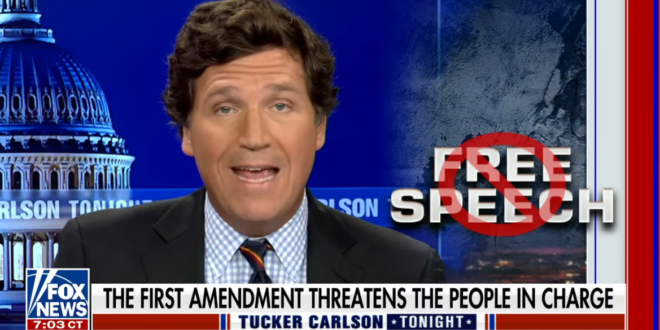 So these horrifying murders in Colorado over the weekend quickly became a pretext for yet more censorship of your speech. You are responsible for this, they told you, because you said the wrong things. You are guilty of stochastic terrorism, inspiring violence by your beliefs.

Anderson Lee Aldrich committed mass murder because you complained about the sexualizing of children. Every time you object to drag time story hour for fifth graders or point out that genital mutilation is being committed on minors — which it is — every time you say that, you are putting people’s lives at risk.

Now that seems implausible and yet many are making this claim. Many have made it over the past 24 hours. Watch for example Brandy Zadrozny of NBC.

When you point out the truth, indisputably, and the truth is that some adults in this country, apparently a growing number, have a deeply unhealthy fixation on the sexuality of children — when you say that out loud, you get people killed.

That is what Brandy Zadrozny is saying. And by saying that, Brandy Zadrozny and the many people like her are effectively defending that same deeply unhealthy fixation on the sexuality of children.

By the way, it’s absolutely real. You’re not imagining that. It’s happening. The evidence is everywhere. And it comes to light on the internet. And Brandy Zadrozny and people like her hate that you are seeing that.

Notice that Zadrozny is not claiming that Libs of TikTok is making this up. She never even suggests that. She is threatening them, you should know, and she’s doing that because they’re pointing it out. Noticing it’s happening is their crime. And once again, it is happening.

I think the message between the lines is, “Yeah, we know we have blood on our hands. And we like it that way.”

Won’t be much longer before tucker says it openly.

Agreed. And I’m not being sarcastic – I really think he will sooner rather than later.

A blitz of new bills may effectively force transgender people and their families to leave the state.

ethnic cleansing with a rethuglican twist

So what he’s saying is that he thinks the murderer was right.
Fucking ghoul.