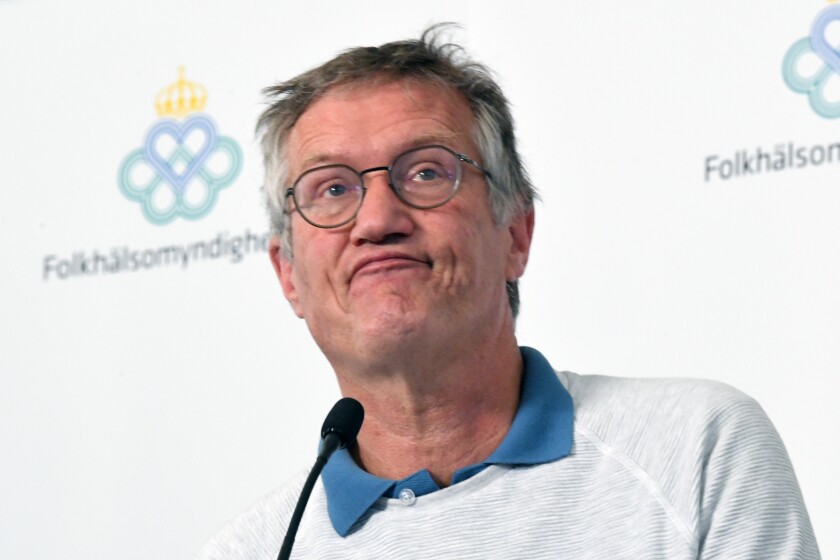 Throughout much of the pandemic, Sweden has stood out for its ostensibly successful effort to beat COVID-19 while avoiding the harsh lockdowns and social distancing rules imposed on residents of other developed nations.

Swedish residents were able to enjoy themselves at bars and restaurants, their schools remained open, and somehow their economy thrived and they remained healthy. So say their fans, especially on the anti-lockdown right.

A new study by European scientific researchers buries all those claims in the ground. Published in Nature, the study paints a devastating picture of Swedish policies and their effects.

“The Swedish response to this pandemic,” the researchers report, “was unique and characterized by a morally, ethically, and scientifically questionable laissez-faire approach.”

The lead author of the report, epidemiologist Nele Brusselaers, is associated with the prestigious Karolinska Institutet in Stockholm; her collaborators are affiliated with research institutes in Sweden, Norway and Belgium.

The details of Swedish policies as described by Brusselaers and her co-authors are horrifying. The Swedish government, they report, deliberately tried to use children to spread COVID-19 and denied care to seniors and those suffering from other conditions.

The government’s goal appeared geared to produce herd immunity — a level of infection that would create a natural barrier to the pandemic’s spread without inconveniencing middle- and upper-class citizens; the government never set forth that goal publicly, but internal government emails unearthed by the Swedish press revealed that herd immunity was the strategy behind closed doors.

Explicit or not, the effort failed. “Projected ‘natural herd-immunity’ levels are still nowhere in sight,” the researchers wrote, adding that herd immunity “does not seem within reach without widespread vaccinations” and “may be unlikely” under any circumstances.

That’s a reproach to the signers of the Great Barrington Declaration, a widely criticized white paper endorsing the quest for herd immunity and co-written by Martin Kulldorf, a Sweden-born Harvard professor who has explicitly defended his native country’s policies.

The country’s treatment of the elderly and patients with co-morbidities such as obesity was especially appalling.

“Many elderly people were administered morphine instead of oxygen despite available supplies, effectively ending their lives,” the researchers wrote. “Potentially life-saving treatment was withheld without medical examination, and without informing the patient or his/her family or asking permission.”

In densely populated Stockholm, triage rules stated that patients with co-morbidities were not to be admitted to intensive care units, on grounds that they were “unlikely to recover,” the researchers wrote, citing Swedish health strategy documents and statistics from research studies indicating that ICU admissions were biased against older patients.

These policies were crafted by a small, insular group of government officials who not only failed to consult with experts in public health, but ridiculed expert opinion and circled the wagons to defend Anders Tegnell, the government epidemiologist who reigned as the architect of the country’s approach, against mounting criticism.

More tellingly, it’s much worse than the rate of its Nordic neighbors Denmark (961), Norway (428) and Finland (538), all of which took a tougher anti-pandemic approach.

The right-wing economic commentator Stephen Moore, a reliably wrong pundit on many topics, preened over Sweden’s death rate compared to other countries that imposed more stringent lockdowns: “Sweden appears to have achieved herd immunity much more swiftly and thoroughly than other nations,” Moore wrote.

According to Johns Hopkins, on Feb. 17, the day that Moore’s column appeared in the conservative Washington Examiner, Sweden’s seven-day average death rate from COVID was 5.25 per million residents.

Moore also declared, “What is clear today is that the Swedes saved their economy.”

The Organization for Economic Cooperation and Development, or OECD, of which Sweden is a member, isn’t quite so sanguine.

The OECD found that in terms of pandemic-driven economic contraction, Sweden did marginally better than Europe as a whole, but markedly worse than its Nordic neighbors Denmark, Norway and Finland, “despite the adoption of softer distancing measures, especially during the first COVID wave.” COVID-19, the OECD concludes, “hit the economy hard.”

The Nature authors show that Swedish government authorities denied or downplayed scientific findings about COVID that should have guided them to more reasoned and appropriate policies.

These included scientific findings that infected but asymptomatic or pre-symptomatic people could spread the virus, that it was airborne, that the virus was a greater health threat than the flu and that children were not immune.

The Swedish policymakers “denied or downgraded the fact that children could be infectious, develop severe disease, or drive the spread of the infection in the population,” the Nature authors observe. At the same time, they found, the authorities’ “internal emails indicate their aim to use children to spread the infection in society.”

So the government refused to counsel the wearing of masks or social distancing or to sponsor more testing — at least at first. One fact that tends to be glossed over by anti-lockdown advocates is that Sweden did eventually tighten its social distancing regulations and advisories, though only after the failure of its initial policies became clear.

At first, in early March when other European countries went into strict lockdowns, Sweden only banned public gatherings of 500. Within weeks, it reduced the ceiling to 50 attendees. The state allowed no distance learning in schools at first, but later permitted it for older pupils and university students.

In June 2020, Tegnell himself acknowledged on Swedish radio that the country’s death rate was too high. “There is quite obviously a potential for improvement in what we have done in Sweden,” he said, though he backtracked somewhat during a news conference after the radio interview aired.

And in December 2020, King Carl XVI Gustaf shocked the country by taking a public stand against the government’s approach: “I think we have failed,” he said. “We have a large number who have died and that is terrible.”

He was correct. If Sweden had Norway’s death rate, it would have suffered only 4,429 deaths from COVID during the pandemic, instead of more than 18,500.

What may be especially damaged by the experience is Sweden’s image as a liberal society. The pandemic exposed numerous fault lines within its society — notably young versus old, natives versus immigrants.

The Nature authors underscore the irony of that outcome: “There was more emphasis on the protection of the ‘Swedish image’ than on saving and protecting lives or on an evidence-based approach.”

The lesson of the Swedish experience should be heeded by its fans here in the U.S. and in other lands. Sweden sacrificed its seniors to the pandemic and used its schoolchildren as guinea pigs. Its government plied its people with lies about COVID-19 and even tried to smear its critics.

These are features of the policies of the states that have been least successful at fighting the pandemic in the U.S., such as Florida — sacrifices borne by the most vulnerable, scientific authorities ignored or disdained, lies paraded as truth. Do we really want all of America to face the same disaster?