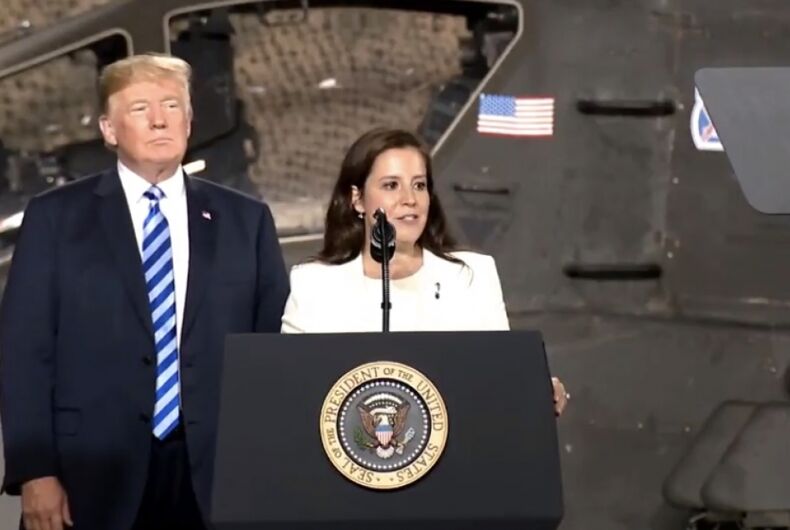 One of the top Republicans in Congress is calling Democrats “pedo grifters” because immigrant detention centers have baby formula.

House Republican Conference chairperson Elise Stefanik – the third-highest member of House GOP leadership – said that “pedo grifters” are sending food to immigrant babies as the right continues to use baseless accusations of pedophilia as insults against pretty much anyone who disagrees with them.

“The White House, House Dems, & usual pedo grifters are so out of touch with the American people that rather than present ANY PLAN or urgency to address the nationwide baby formula crisis, they double down on sending pallets of formula to the southern border,” she wrote. “Joe Biden has NO PLAN.”

Stefanik’s casual use of the word “pedo” shows just how mundane it has become for rightwingers to call anyone they disagree with a pedophile.

For years, the rightwing QAnon conspiracy theory has claimed that there is a secret cabal of pedophiles operating a Satanic international child sex ring led by Hollywood celebrities and Democratic elites. Effectively, the QAnon conspiracy theory allowed believers an intellectual shortcut: instead of trying to understand why people would disagree with their policy preferences – a process that requires listening to others and the ability to understand multiple ideas at once – they could just accuse anyone who disagreed with them of being a Satanic pedophile, and who really cares why Satanic pedophiles believe what they believe?

The casualization of accusing political opponents of pedophilia heightened over the last couple of months as conservatives started referring to LGBTQ people – especially teachers – as well as anyone who supports LGBTQ equality as pedophiles and groomers. Rep. Lauren Boebert (R-CO) accused Tyra Banks of grooming children because she produced a documentary about teen drag queens. Florida Gov. Ron DeSantis’s (R) press secretary accused anyone who opposes the Don’t Say Gay bill of being a groomer or supporting grooming.

Chaya Raichik of the anti-LGBTQ Twitter account “Libs of TikTok” regularly accuses LGBTQ teachers of “grooming” even though she has no evidence of sexual abuse occurring. Rep. Marjorie Taylor Greene (R-GA) said it was grooming for a science camp to have non-binary counselors, and conservatives even called the anti-suicide organization The Trevor Project “a grooming organization.”

While Stefanik may have been saying that those who want babies in detention centers fed so that they can later be sexually abused, it’s more likely that she does not have any ability to engage her political opponents other than to accuse them of pedophilia. Actually presenting a plan for what to do about baby formula shortages in the U.S. – and then arguing why that plan is better than the Biden administration’s plan – is a lot harder than just calling people pedophiles.

And the baby formula shortage is real. Currently, 40% of formula is out of stock in the U.S., which has led parents to stockpile formula, exacerbating the shortage. The shortage follows the recall of a major formula producer’s products because deadly bacteria was found in a factory, the COVID-19 pandemic’s effects on supply chains, and restrictive trade policies around formula.

Stefanik was echoing rightwing complaints that immigrants forced to live in processing centers near the U.S.-Mexico border.

“What is infuriating to me is that this is another example of the ‘America Last’ agenda the Biden administration continues to perpetuate,” Rep. Kat Cammack (R-FL) said last week, not presenting any alternative to immigrant access to formula other than letting babies in processing centers starve.

President Joe Biden announced a plan to address the crisis last week that included making it easier to use WIC benefits to buy formula of different sizes and types, increasing imports of formula, and cracking down on price gouging.

House Speaker Nancy Pelosi (D-CA) said that the House will soon vote on a bill to grant emergency authority to WIC  to address supply chain disruptions and relax certain regulations not related to the safety of baby formula.

In a later statement Stefanik’s office said that “pedo grifters” was referring to the Lincoln Project, a group of Republicans and former Republicans who advocated against the reelection of Donald Trump. They are not involved in the baby formula shortage and they aren’t in charge of presenting a plan to end the baby formula shortage, so it’s unclear how that statement explains what she said.