DARREN BEATTIE (GUEST): There’s a reason that, people like us, when we talk about federal involvement in January 6th, it’s met with the most vicious and hostile response from the regime imaginable.

But no matter how dark and uncomfortable these truths are, the American people need to learn about them from themselves.

I encourage everyone, if you’re skeptical, if you’re not, if you know someone who is skeptical, go to revolver dot news right now.

Read our report and challenge others to do so as well and tell them to look you in the eye and say that the feds weren’t involved in this. It’s a clear hoax.

We know what’s happened but there’s unfinished business and we need to expose the feds for what they’ve done because, as I’ve said on your show before, until we bring the national security state to heel, our politics will be nothing but fake and performative.

White House appointee & former @RepMattGaetz staffer Darren Beattie is a white supremacist. While Nazis were storming the Capitol, Darren was telling Black people to “take a knee to MAGA” and “learn their proper place in society.” pic.twitter.com/lPKCvSX4co

Carlson: The Rioters Were Justified In Their Actions

“Above all, they lie about the reason that January 6th happened in the first place. And you know what it is — the entire country watched Joe Biden get what they claimed was 10 million more votes than Barack Obama himself.

“Joe Biden got 10 million more votes than Barack Obama got? And a lot of those votes arrived after the election.

“In a lot of places voting was stopped in the middle of the night. Why? In the biggest states in the country, voter ID was optional. Why is that okay?

“A lot of the protesters on January 6th were very upset about that, and they should have been. All of us should be.

“But the January 6th committee ignored all of that completely. Instead, on the basis of zero evidence, no evidence whatsoever, they blame the entire riot on white supremacy.” – Tucker Carlson, last night. 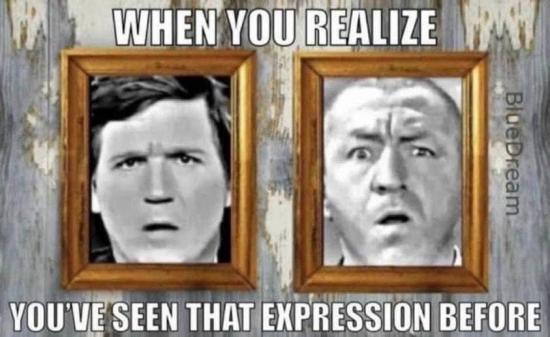