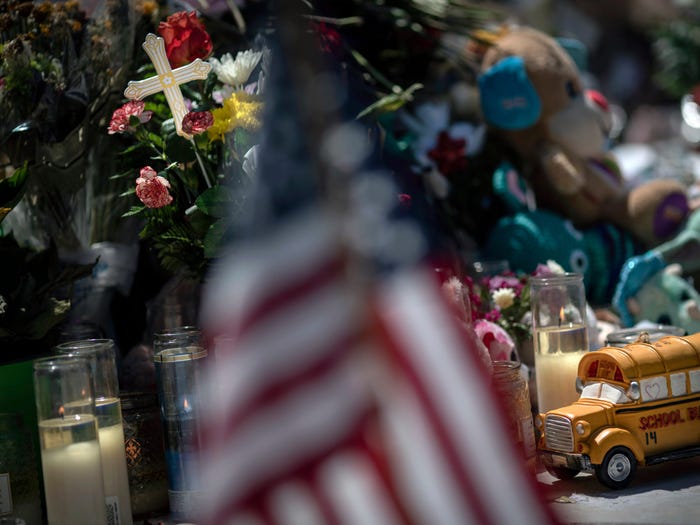 A toy yellow school bus is placed in front of a cross to honor Rojelio Torres, one of the children killed during the mass shooting in Robb Elementary School, while an American flag is seen in the foreground, Sunday, May 29, 2022, in Uvalde, Texas. Wong Maye-E/AP

More than 4 in 10 Republicans think mass shootings are inevitable in a “free society,” according to a new poll by CBS News and YouGov.

The survey results came on the heels of a string of mass shootings across the country that have prompted Congress to once again consider legislation on gun control.

One of the questions in the poll asked respondents if they feel that mass shootings are “unfortunately something we have to accept as part of a free society” or “something we can prevent and stop if we really tried.”

The survey had a sample size of 2,021 US adults that were interviewed between June 1 and June 3, per CBS News, which noted the margin of error is ±2.6 points.

Following the shooting in Uvalde, President Joe Biden insisted that Senate Minority Leader Mitch McConnell is a “rational Republican” who could agree to gun control measures, despite the party’s longtime refusal to seriously entertain policy changes on firearms.

McConnell signaled his willingness for Republican senators to work with Democrats on a bipartisan push for gun safety legislation, but he did not endorse any specific proposals. The Minority Leader said he had “encouraged” Sen. John Cornyn, a Texas Republican, to talk to key Democrats “who are interested in trying to get an outcome that’s directly related to the problem.”

Days later, a conservative radio host tweeted that Cornyn was “open to making gun laws more restrictive.” Cornyn responded to the tweet, saying it was “not gonna happen.”

In the CBS/YouGov poll, respondents from political parties across the board seemed to agree that it is unlikely Congress will “pass any laws in the next few months that will make significant changes to gun policy.”

A total of 66% of Democrats, 72% of Independents, and 71% of Republicans indicated that they think it is “not very likely” or “not at all likely” that Congress passes significant, new gun policies in the coming months.

6 thoughts on “4 in 10 Republicans think mass shootings are ‘unfortunately something we have to accept as part of a free society’: CBS/YouGov poll”