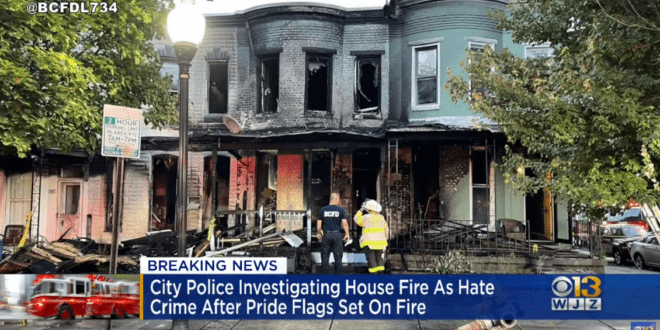 A Wednesday morning fire in Baltimore that put three people in the hospital is being investigated as a possible hate crime, authorities told WJZ.

Based on a preliminary investigation, authorities believe someone set fire to at least one Pride flag outside a row home in the 300 block of E. 31st Street and the flames spread to the home and neighboring homes, a Baltimore Police spokesperson said.

Three victims were taken to Shock Trauma for treatment, he said. A 30-year-old woman and 57-year-old man were hospitalized in critical condition, and a 74-year-old man is in serious condition, the Baltimore City Fire Department told WJZ.

At 4 AM this morning, on the corner of Barclay and 31st St, someone burned a Gay Pride flag posted on my neighbor’s porch. Three houses went up in flames #Baltimore pic.twitter.com/prj6M5wi0W

For those attending Pride events, be particularly vigilant.

Trump’s people have guns, and they’re willing and anxious to use them.

I find myself holding back from using public restrooms if there is someone already in there. The atmosphere has changed where there could be a real confrontation. It isn’t helping that Republican politicians here in Oklahoma are trying to out do each other in their anti-Trans hate.

It’s really wearing me down.

This is what a failing democracy looks like. A majority support gay marriage, contraception, interracial marriage, and abortion rights, but are powerless to stop the removal of these rights.

“ Dear America: You are waking up, as Germany once did, to the awareness that 1/3 of your people would kill another 1/3, while 1/3 watches.”

Fundamentalist evangelical Christianity and its members are, sadly, a major major factor when it comes to the future of our nation. Ronald Reagan opened the doors of government to them in the early 80s and they poured in.

In the person of Donald Trump they found their perfect puppet. They control him and he controls the vast majority of Republicans today.

My thoughts exactly. Add to that increasing violence, especially political violence and violence directed at minorities, and society at large but especially authorities becoming increasingly tolerant of it. Kyle Rittenhouse being acquitted after murdering two people and then lauded as a celebrity is a harbinger of things to come.