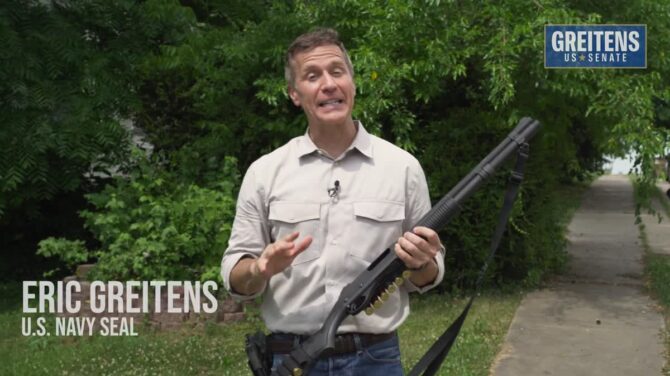 Former Missouri Governor/accused sexual predator/U.S. Senate hopeful Eric Greitens released a new campaign ad today in which he gleefully talks about murdering people, specifically members of his own party who don’t fall in line with his extreme right-wing views.

“We are sick and tired of the Republicans in Name Only surrendering to Joe Biden & the radical Left. Order your RINO Hunting Permit today!” Greitens, who is currently leading the race to become the GOP nominee to represent his state in the Senate, tweeted this morning, along with the violent video.

<blockquote class=”twitter-tweet”><p lang=”en” dir=”ltr”>We are sick and tired of the Republicans in Name Only surrendering to Joe Biden &amp; the radical Left.<br><br>Order your RINO Hunting Permit today! <a href=”https://t.co/XLMdJnAzSK”>pic.twitter.com/XLMdJnAzSK</a></p>&mdash; Eric Greitens (@EricGreitens) <a href=”https://twitter.com/EricGreitens/status/1538876823978713089?ref_src=twsrc%5Etfw”>June 20, 2022</a></blockquote> https://platform.twitter.com/widgets.js

“Today, we’re going RINO hunting,” he says in the video before cocking his gun. “The RINO feeds on corruption and is marked by the stripes of cowardice.”

He is then joined by an Army swat team and storms into a single family home with smoke bombs and AR-15s rifles.

“Join the MAGA crew,” Greitens says. “Get a RINO permit. There’s no bagging limit, no tagging limit, and it doesn’t expire until we save our country.”

The ad is disturbing on a number of levels.

Not only because it features a U.S. Senate candidate encouraging acts of violence and murder on the heels of two high-profile mass shootings, but also because Greitens was once accused of blindfolding a woman, tying her to an exercise machine, stripping her naked, and taking her picture then using it as blackmail.

In addition to that, his ex-wife is currently suing him for custody of their children and says he is prone to violence and aggression, exhibited “unstable and coercive” behavior during their marriage, and would threaten to commit suicide if she didn’t show “specific public political support” for him.

Here’s what folx are saying about the ad on Twitter…

He once held a woman hostage, took pictures of her naked while she was tied up, without her consent, threatened to release the pics if she ever spoke of their affair, and then forced her to perform oral sex on him.

you're an extremely sick man

If he gets through the primary, Eric Greitens will be the most embarrassing major party candidate in a statewide race since David Duke.

Eric, this ad is unacceptably irresponsible to the point it would be disqualifying… Except, apparently, with the GOP base… It's not cute, it's not funny, it's irresponsible and I question your judgement in making it.

Eric Greitens is implicitly calling for the execution of political opponents. He must not be allowed to become a U.S. Senator.

Eric Greitens a member of the Navy Reserves has violated DOD policy by identifying himself as a “SEAL”  and using military uniforms without a disclaimer.

Contact the Naval Inspector General Hotline at NAVIGHotlines@navy.mil or (800)522-3451 and report this abuse. https://t.co/hSZB6VIqLa

Eric Greitens is a…

is that really who you want in the Senate? Be honest with yourself.

Really going for the 1930s Germany look there, aren't you?

In the wake of the recent mass shootings in Uvalde and Buffalo, Congress appears to be making some progress on legislation to address gun violence.

Last week, Democrats and Republicans agreed to a bipartisan framework on legislation to address mental health and school safety, and to make it more difficult for young people to obtain guns.

Missouri’s Republican primary is scheduled for August 2, 2022. Most polls have Greitens leading in a crowded field of nearly two dozen candidates.