The House has approved an amendment to the National Defense Authorization Act to compel government officials to prepare a report on combating white supremacists and neo-Nazi activity in the police and military, despite every Republican voting against the measure.

The amendment, sponsored by Rep. Brad Schneider, was passed in a 218-208 party-line vote on Wednesday. All 208 votes against the amendment came from House Republicans, one of whom described it as “Orwellian.”

The “Schneider Amendment” called for the FBI, the Department of Homeland Security, and the Secretary of Defense to publish a report that sets out ways to combat white supremacist and neo-Nazi activity in the uniformed services and law enforcement agencies “not later than 180 days after enactment and every 6 months thereafter.”

The amendment called for the total number of people who were discharged from the military or police because of their links to or support for far-right extremism to be published. 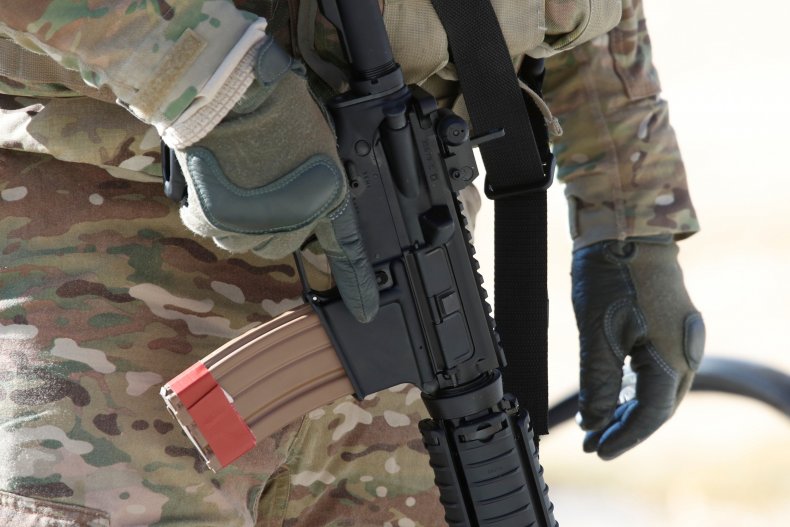 A Utah National Guard soldier has his rifle at the ready as he patrols at the Utah State Capitol building in Salt Lake City, Utah, on January 17, 2021. An amendment to monitor white supremacy in the military and law enforcement has been passed.GEORGE FREY/AFP/GETTY IMAGES

The amendment also states that the report the government is being asked to write should detail how agency leaders responded to “planned or effectuated incidents” connected to white supremacist or neo-Nazi activity,” according to a report in The Hill.

“We just voted to combat neo nazis in our military and every single republican voted no,” tweeted New Jersey Democratic congressman Bill Pascrell after the amendment was passed.

Speaking on the House floor, Schneider noted how the U.S. has seen a surge in domestic extremist incidents, such as the deadly 2017 neo-Nazi “Unite the Right” rally in Charlottesville, Virginia, and the mass shooting at the Tree of Life synagogue in Pittsburgh in 2018.

He also highlighted a report published in May from the Defense Counterintelligence and Security Agency entitled The Insider Threat and Extremist Activity Within the DoD, which detailed examples of military personnel being found to have held extremist views.

“Such behavior, such extremism is a threat to us in all segments of society. There is no reason to believe that our military is any different,” Schneider said during debate on the House floor.

“These are exceptions, they are rare, but we must do everything we can to identify them and to thwart them before risks become a reality.”

Arizona GOP congressman Andy Biggs was one of those who spoke out against the amendment, describing it as “Orwellian in nature.”

“This amendment attempts to create a problem where none exists by requesting investigations into law enforcement and the armed services for alleged rampant white supremacists or white national sympathies,” Biggs said.

The House is now expected to pass the full NDAA. It will then be passed over to the Senate, where it could be stripped down.

In December 2021, the Pentagon issued new guidelines on activities that qualify as extremism amid concerns that service members took part in the January 6 attack at the Capitol.

The update included supporting the overthrowing of the government and “liking” or sharing extremist views on social media.

Last February, the Pentagon released another report warning of the prominence of white supremacist ideology inside the military.

The report, first obtained by RollColl, detailed one case in which a Florida National Guard member who was part of a neo-Nazi group, bragged in an online forum with other white supremacists that he was “100% open about everything” regarding his far-right support to his colleagues during his training.

“They know about it all. They love me too cause I’m a funny guy,” he wrote.

All 208 republicans went on record saying they WOULD have voted for it if it was to root out gay people instead of Nazis.

Would love to hear what possible excuses the Republicans could make for justifying their “no” votes.

12 thoughts on “House Republicans All Vote Against Neo-Nazi Probe of Military, Police”