Do I really have to add anything here?   What a racist bigot speaking to a room full of racist bigots, all of one party.   The Republican party.   Hugs 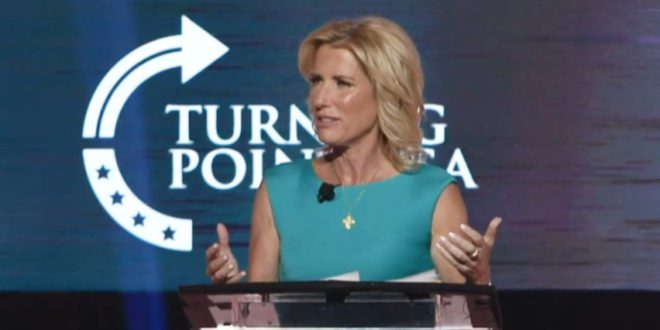 We have the first female Treasury secretary in Janet Yellen, and we have KJP [Karine Jean-Pierre], as press secretary, she’s another first.

Doesn’t she make you guys yearn for the days of Jen “circle back” Psaki?

No one in the administration is actually, at any level, is actually qualified to do their current jobs.

Oh wait a second, wait a second. I left out Kamala Harris, or as Gov. DeSantis likes to call her, Biden’s 25th amendment insurance policy.

Now, what’s more annoying, do you think? Kamala Harris’ nervous giggle at inappropriate times or her saying in long repetitive paragraphs that which could be said in one sentence.

Ingraham does an impression of Vice President Kamala Harris.

Fox News, it should be noted, has a widely-ignored rule against its on-air personalities appearing at political events.

So, the only people who will ever merit appointment to the president’s cabinet are old white men. Got it, you misogynist, racist cunt.

No one in the administration is actually, at any level, is actually qualified to do their current jobs.

Yes, exactly my thought. And Orange Hitler trashed half of them after they left.

TRANSLATION – “This is the ‘Great Replacement Theory’ in action!!!”.

Completely predictably, straight, white, Christian American are losing their feeble little minds because ‘others’ are making progress toward equality, and their irrational, hysterical response is to simultaneously mock that progress while also portraying themselves to be victims of discrimination and persecution because of it.

Miss Ingraham, one day you will wake up look in the mirror and ask your self when you look back at your life if it was all worth it when no one wants to deal with you.

If Eva Braun here is so enamored with the bad old days when straight white men ran everything and were placed in all positions of authority, she should consider the fact that women like her never would have had a job like the one she has; instead, she’d be barefoot and pregnant in the kitchen making babies and pleasing her husband. She wouldn’t even be allowed to have a lucrative job like the one she has. She’s a fucking hypocrite pining for the bad old days while blithely overlooking how bad they were for women.

Unmentioned is the fact that it took over 200 years to achieve all these “firsts.” That exposes the bigotry in our history. Biden should be applauded for doing what Trump did not address.

So you mean retired 4 star general, West Point graduate, former CENTCOM commander is not good enough to be Secretary of Defense because of his skin color? You’re a real fucking piece of work lady.
Your attitude and words will catch up to you someday.