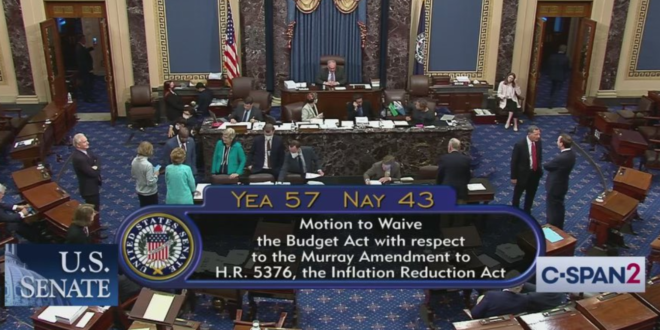 Republican lawmakers on Sunday successfully stripped a $35 price cap on the cost of insulin for many patients from the ambitious legislative package Democrats are moving through Congress this weekend, invoking arcane Senate rules to jettison the measure.

The insulin cap is a long-running ambition of Democrats, who want it to apply to patients on Medicare and private insurance.

Republicans left the portion that applies to Medicare patients untouched but stripped the insulin cap for other patients. Bipartisan talks on a broader insulin pricing bill faltered earlier this year.

Republicans singled out the insulin price cap—a vital, life-saving measure for which there is no rational objection—and blocked its inclusion in the bill, expressly to “deny Democrats a victory” at a cost of American lives. The ultimate expression of politics over all else.

During the Senate’s debate of the Inflation Reduction Act today, Democrats tried to cap the price of insulin at $35.

It needed 60 votes and got 57 because Republicans overwhelmingly opposed it.

Republicans again stopped affordable insulin for millions who need it to live. pic.twitter.com/QgD4N2Ak64

A “Christian Nation” and a real “pro-life” person would not have voted against the cap.

One thought on “Republican Senators Block $35 Price Cap On Insulin”