Armed maga thugs, trump brownshirts, with the intent to intimidate the ones they are against / hate which in this case is law enforcement.   They did this to school board meetings over masks and Covid precautions, they have done this to the drag queen story hours, they have done this to schools / libraries over LGBTQ+ materials.   This is what open carry means to them.    The power to make others fearful.  They are the enforcement arm of the republican party, and the party loves to support them and to aim them at their enemies.   Scary and it is going to get worse.   Hugs 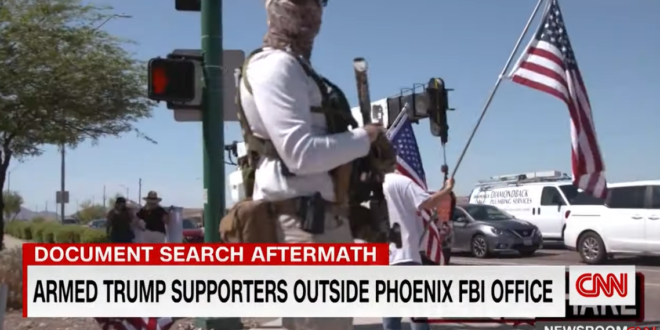 Signs reading “Honor your oath” and “Abolish FBI” were seen outside the FBI office in Phoenix on Aug. 13, just days after news broke that the agency searched former President Donald Trump’s Mar-a-Lago home in Florida. Several of those who were there were armed with guns.

FBI agents seized classified records from Trump’s home during the agency’s unprecedented raid on Aug. 8, including some marked as top secret, according to a warrant and property receipt. Trump disputes the classification, saying the records have been declassified.

NEW: Armed Donald Trump supporters have gathered outside the Phoenix, Arizona, FBI office after what they call the "unlawful" search of Mar-a-Lago. #azleg https://t.co/hpG34rNBFp

Trump supporters in Phoenix, AZ gather outside the FBI building with gunspic.twitter.com/IG6FI2CbIb

This is domestic terrorism and needs to be treated as such.

Mark • an hour ago

Well hell! Let’s get some more of those ‘open carry’ laws passed!
I mean, what could go wrong?…..or maybe the rethugs wanted this all along…

Reality.Bites JB • an hour ago

Yeah, but your country decided a long, long time ago that citizens walking around with guns is perfectly OK.

There are lots of ways in which the United States is different from every other democracy on earth. And not one of them makes it better or more free.

Look at them, backing the blue. How cute.

If anyone in the area encounters any of these goons, you can easily escape them by walking up a couple of stairs…

Imagine if they folks were a different skin color.
They’d been blown to bits by now.

As someone posted on BB… if they were POC doing this, they would mostly be dead now.