This post is for all those who claim homosexuality is not natural.   Same sex relationships / sex in the animal kingdom is very well documented.   Which means that the bigots must now admit that OK it is inborn and happens in some people but god meant you cannot act on it.    Yet his other animal creations are allowed to do so?   Why would he be OK with them doing that but not the human animal?   Plus notice that the gays are always loving enough to accept and care for those kids that the straights want to ignore or throw away.    Hugs 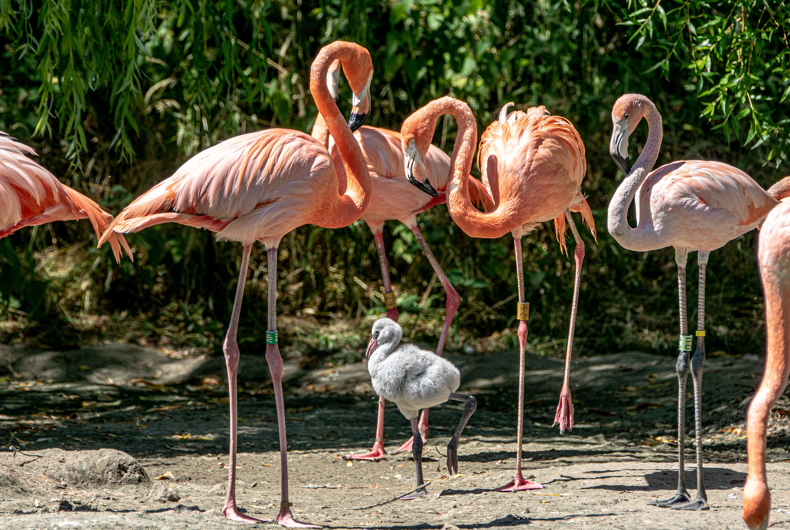 An abandoned baby flamingo has found new life with a couple of longtime flamingo dads.

At ZSL Whipsnade Zoo, northwest of London, pink-feathered fathers Hudson and Blaze were chosen by zoo keeps to take responsibility for hatching an egg abandoned by the soon-to-be chick’s bio parents.

The American flamingo egg (Phoenicopterus ruber) was popped in an incubator while the bird team at the zoo, the UK’s largest, searched for adoptive parents.

They didn’t have to look far.

Team leader Tim Savage said: “Flamingos usually work together, as a monogamous pair, to care for their eggs and subsequent chicks. Hudson and Blaze were the clear choices for the incubated egg, as they have always proved to be ideal parents.”

Among the zoo’s whole “flamboyance”, or group of flamingos, the same-sex couple was known by staff for taking exceptional care of their shared bird crib. After the egg was handed over, the pair sat tight until it hatched.

“After the chick hatched in their nest, they sat with it for two weeks, keeping it warm and protecting it from other flamingos, who often squabble and shove around different nest sites,” Savage said.

🦩 Heart-warming news as a baby flamingo is being successfully raised by two fathers at @ZSLWhipsnadeZoo, after its biological parents vacated their nest.

As parents, male flamingos share some of the same traits found in females, making a same-sex upbringing a natural choice. The bright red “crop milk” that sustains chicks after hatching is produced by both males and females of the species.

“The same hormone that regulates milk production in mammals, regulates the production of crop milk,” said Savage. “It’s stimulated by the mother or father’s experience of sitting on an egg and watching the chick hatch.”

“The milk is made in the linings of their digestive tract and contains fat, protein and blood cells. You can often spot the new parents in a group because they give so much of their own pigment to their chicks that they almost turn white!”

Same-sex flamingo pairs have been observed at the Zoo before, as have thruples, with a mix of male and female birds in one nest. Penguins are also known to form same-sex pairings during the breeding season.

The dad couple’s adopted kiddo, still covered in a downy coat of grey feathers, is out of the nest, but they’re keeping a pair of pink birds’ eyes on it.