See this really is not that hard.   It is simple respect.   Hugs. 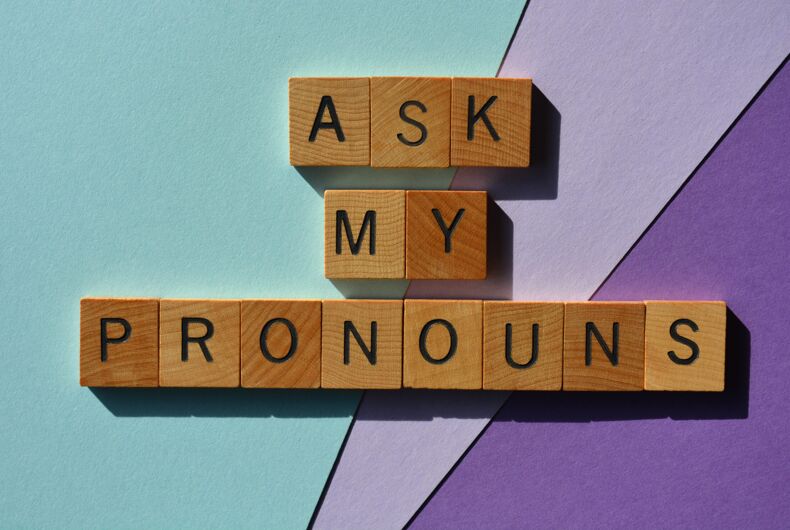 In the English language, we have masculine and feminine pronouns, which can be difficult for people who don’t identify as male or female. In recent years, there has been a push to add more gender-neutral pronouns into the English language. If you’re not sure what these are, or you’re unclear about how to use them, read on.

Here, we explain everything you need to know about gender-neutral pronouns and gender pronouns as a whole, as well as provide a list of pronouns used today.

What Are Gender Pronouns?

Pronouns are words that are used to substitute nouns in a sentence. We also use pronouns to refer to people other than their names.

For example, you can say “Someone left a package outside your door. They didn’t leave a note though.” or “I called a plumber to check out the sink. I’m expecting them at 4 pm.”

Gender-neutral pronouns are also often used by non-binary and gender non-conforming people who don’t strictly identify as either male or female.

Some gender non-conforming and transmasculine/transfeminine people prefer using more than one set of pronouns. These are called rolling pronouns and can be used alternately in a sentence or across separate sentences.

Some people prefer using different sets of pronouns on different days depending on how they identify. This is particularly true for people who identify as genderfluid or whose gender is in a constant state of flux.

Unfortunately, we can’t provide an exhaustive list of all pronouns, as people come up with new pronouns all the time. Here is an incomplete list of some of the most commonly used gender pronouns today:

Why Do Pronouns Matter?

Pronouns are personal identifiers, just like people’s names. By respecting someone’s pronouns, you show the person that you respect who they are and how they identify.

This is particularly important for transgender and non-binary people who may wrestle with gender dysphoria – a feeling of discomfort or distress associated with the mismatch between their sex assigned at birth and gender identity. For these people, being referred to with the correct pronouns can help alleviate that dysphoria, increase their self-esteem, and improve their overall sense of self.

Using people’s correct pronouns – and talking about the importance of doing so – also encourages others to follow suit. This paves the way for more inclusive attitudes towards gender-expansive people.

How To Be Respectful Of Other People’s Pronouns

It goes without saying that you should never purposefully misgender someone if you already know their personal pronouns. But how else can you be inclusive and respectful of other people’s pronouns?

Never Assume A Person’s Pronouns Based On How They Look

Offer Your Pronouns When Meeting Someone New

Most people assume that only LGBTQ people share their gender pronouns. But having a list of pronouns isn’t just an LGBTQ thing.

Apologize When You Get Someone’s Pronouns Wrong

It may be challenging to get the hang of using someone’s personal pronouns, especially if you’re used to referring to someone in a certain way. As such, try not to panic if you accidentally address someone with the wrong pronouns.

But you also have to assure the other person that you are not purposefully misgendering them. When doing so, it is best to apologize quickly and avoid making a fuss over the blunder. You don’t want to call attention to the situation or put the other person in an awkward or uncomfortable spot.

One easy way to encourage the use of personal pronouns is by adding them to your social media bio, email signature, business card, etc. This can encourage others to follow suit and signals to transgender and non-binary friends and colleagues that you are an ally they can trust.

You may have heard the term “preferred pronouns” in reference to gender pronouns. While this is fairly common, many in the trans and non-binary community try to avoid this language, as it suggests that their correct pronouns are merely a preference or a suggestion. Instead, try using words like “personal pronouns” or, simply, “pronouns”.

Words matter. Language helps us understand parts of ourselves and allows us to communicate who we are to other people. As such, everyone needs to recognize that other people’s pronouns, much like their name and gender identity, should be acknowledged and respected.

If you enjoyed this article, check out the related articles to learn more about how to be more inclusive toward trans and non-binary people.

Related: How to know if you are non-binary