This is why it is important to keep LGBTQ+ symbols, books, information, and our presence in all communities.    This is why the right / republicans want to destroy these same things.    Somehow they think if kids don’t see it they won’t be LGBTQ+, but what they really want is LGBTQ+ kids to be afraid and unhappy.   Someone once asked me why I thought it was OK for teachers to have rainbow flag stickers in their classrooms or on their classroom doors.     This is why.     Hugs 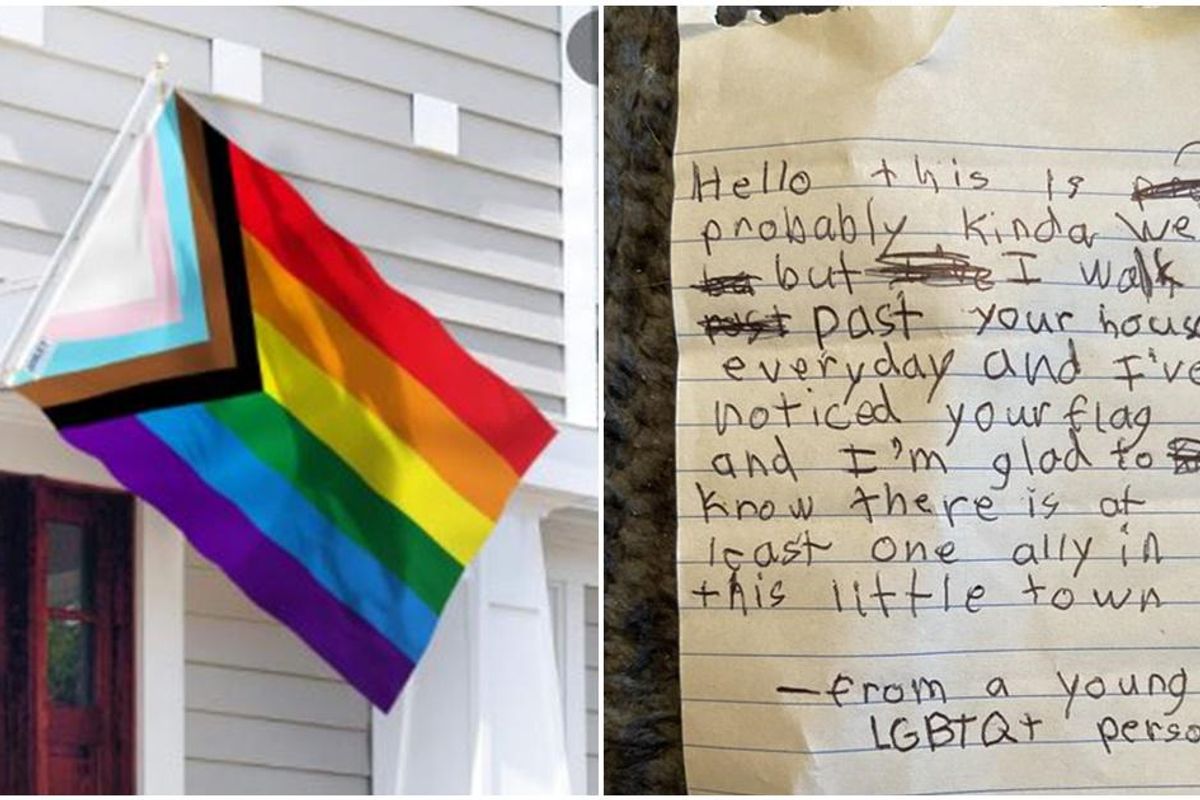 A beautiful story out of Paris, Arkansas (population 3,413) shows the power of representation and how it can have an incredible effect on a child’s life.

Stephanie Robertson, 52, received a Progress Pride flag last year from her son, Levi, 30, and she’s had it up throughout the month of June. Stephanie is a retired lieutenant colonel in the Army Reserve who currently works part-time as a support specialist for the Forest Service at Ozark St Francis National Forest.

“She was excited to hang it up for the first time this year and kept it hanging up outside her home all throughout June,” Levi told PinkNews.

For some perspective, Paris is located in Logan, County Arkansas which is very conservative.

In the last presidential election, 18.8% of residents voted Democrat while 78.3% voted Republican. It’s safe to say a pride flag isn’t something you see every day in that community. That’s why when a self-described “young LGBTQ+ person” saw the flag hanging from Stepanie’s house, it had a huge impact.

The child felt so welcomed by the flag that they put a letter in Stephanie’s mailbox. “She texted me yesterday and was like, ‘You’re not gonna believe the letter I found in our mailbox,’ and sent me a photo of the letter,” Levi told Pink News.

“Hello, this is probably kinda weird,” the letter began, “but I walk past your house every day and I’ve noticed your flag and I’m glad to know there is at least one ally in this little town – from a young LGBTQ+ person.”

The letter was written on a small legal pad and had several words crossed out.

The child’s words provide a small glimpse into what it’s like to live in a small town where people aren’t openly accepting of the LGBTQ community. For the child to learn that there is “at least one” ally in town has to mean the world to them. By hanging that flag, Stepanie showed the child that there was one safe place in their town where they are welcome to be their true self.

“I immediately called her and told her how profound and awesome it was that her hanging it made a child feel seen,” Levi said. “She agreed and kept saying how she couldn’t get over how sweet it was.”

Levi tweeted out a photo of the letter and it has received over 750,000 likes. The viral tweet is a great reminder of the impact that allies can have when they make themselves known through simple gestures such as flying a Pride flag.

It’s also a reminder that there’s still a lot of work to be done to make sure that LGBTQ children feel safe no matter where they live.

The child’s note has encouraged Stephanie to do even more for the LGBTQ community in Paris, Arkansas. “She’s going to find a Progress Pride flag window sticker for the front of her house to keep up all year,” Levi said.