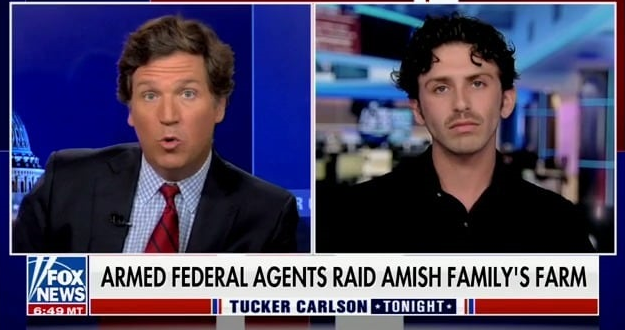 Tucker Carlson sounded just like his good pal and right-wing conspiracy nut Alex Jones on Monday, at one point commenting about chemicals in milk that “turn kids trans.”

The Fox host expressed sympathy during his show for an Amish farmer named Amos Miller who has run into legal trouble over food safety issues identified by the Food and Drug Administration dating back to 2016.

“Maybe if he promises to put more chemicals in the milk that turn kids trans, they’ll lay off,” blurted out Carlson, who has targeted transgender people before. His comment was reminiscent of Jones’ loony theory that the government is “putting chemicals in the water that turn the friggin’ frogs gay.”

Here's the full segment. The line about chemicals in the milk was totally unrelated. Tucker just threw it out there completely unprompted. pic.twitter.com/xJBjpBJfQW

What Carlson said is stupid. He knows it’s a lie but he also knows he can say whatever he likes without consequence, and that saying nutty things keeps his name in the news, so that’s what he does.

Wait, so it’s not Drag Queen Story Hours turning kids trans, it’s chemicals? Quick, someone needs to make a Kickstarter for a special dip stick concerned parents can put in the milk and other goods to indicate if it detects the super scary “turn kids trans” chemical. Possibly with a stretch goal of one that can detect “turn adults trans” chemical?

Since there doesn’t appear to be any science behind any chemical that turns anyone trans, a simple stick that does nothing would not technically be fraud.