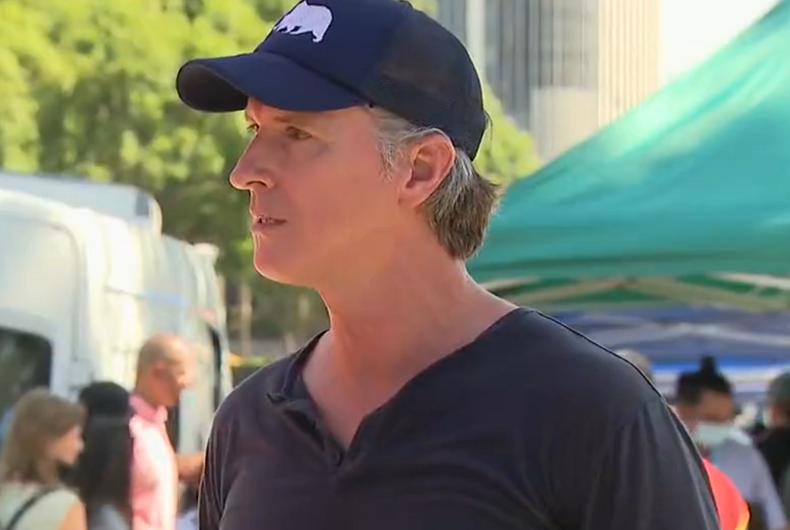 California Gov. Gavin Newsom (D) donated $100,000 to the campaign of the opponent of Florida Gov. Ron DeSantis (R), the latest volley in the war between these two governors.

Newsom specifically brought up DeSantis’s call for violence against Chief Medical Advisor to the President Dr. Anthony Fauci, when DeSantis said earlier this week at a rally that “Someone needs to grab that little elf and chuck him across the Potomac.” DeSantis, like other conservatives, has been railing against Dr. Fauci for years because the medical advisor advocated masking, social distancing, and vaccines during the COVID-19 pandemic.

“To call someone pejorative terms because they’re short – who the hell raised these guys?” Newsom said of DeSantis. “What kind of people are they? I know all of us had to sit there and suck it up and take Trump’s demonization but not everybody has to act like him.”

“I mean, literally, I remember growing up and folks would have their mouths washed out with soap if they talked like this. I got four kids; I don’t want these guys being models.”

“You’re attacking the LGBT community, you’re attacking women, I mean, this guy is so extreme, rape and incest… Ron DeSantis? Talks about freedom? And a young girl who is raped by her father doesn’t have a right to her own body to make her own decision? Spare me, freedom. There’s no freedom, there’s no choice.”

“Teachers were under assault, because, God forbid, teachers were homosexual,” Newsom recounted at an Education Commission of the States event in July. “Somehow, people were presupposing they were ‘grooming’ our kids. That was in the 1970s.”

Also in July, Newsom ran an ad trolling the state of Florida, telling them to stand up for their freedom.

“Your Republican leaders: they’re banning books, making it harder to vote, restricting speech in classrooms, even criminalizing women and doctors,” Newsom said in the ad.

We’re about to celebrate Independence Day — but Freedom is under attack by Republican leaders in states like Florida.

It’s time to stand up. Don’t let them take your freedom. pic.twitter.com/cFI5UzgZzX