Again that law pushed by DeathSantis and adored by the maga bigots is preventing the teaching of US history and the education of the students is white washed to remove any LGBTQ+ achievements or advancements.   If you go to the article linked you will find more information such as below.    Also please notice that the Brownshirt enforcement arm of the republican party the Proud Boys showed up to make a show of threating the board to intimidate the board to vote for the dictates of the right wing.    Is this what US democracy has become, that might makes right, that threats and intimidation will win any contest.  I worry about the up coming election due to this stuff.   It is worth noting that all across the country the right is using violence to stop legal LGBTQ+ events simply because they don’t like them and they hate LGBTQ+ people.   Now in Florida it is illegal to even tell students that gay couples exist and that they cannot bully gay students.  In Florida it is illegal to mention court cases dealing with same sex marriage and cases where trans gender students won the right to use the bathrooms they identify with.   It is illegal to teach facts in Florida schools.     Hugs.

Aside from recognizing October as LGBTQ history month, the proposal was tweaked this year to explore the possibility of providing resources for teachers in 12th-grade social studies to teach about “important landmark civil rights” cases. That includes the Supreme Court’s 2015 Obergefell v. Hodges ruling which recognized same-sex marriage and Bostock v. Clayton County, a 2020 high court decision that protects gay or transgender employees from discrimination.

Some speakers at the meeting urged the board to pass the designation, contending that it would benefit marginalized LGBTQ students who face a higher risk of depression and suicide. They said that “LGBTQ history is American history” and it would help students be better allies to their peers.

That law, FL HB1557 (22R), prohibits teachers from leading classroom instruction on gender identity or sexual orientation for students in kindergarten through third grade. It bans such lessons for older students unless they are “age-appropriate or developmentally appropriate.”

Backed by Gov. Ron DeSantis, the law is facing several lawsuits and is making an impact on how school districts approach local policies this year. Miami Dade, for example, wavered over proposed sexual education textbooks in July, rejecting the books before later reconsidering the vote and approving their use. Other school districts have reviewed LGBTQ student support guides in response to the law. These guides are used to help support LGBTQ students and offer guidance to teachers on how to handle such issues.

While some board members agreed with facets of the proposal, the overwhelming majority opposed the resolution this time around, warning that it could run afoul of the new parental rights law. 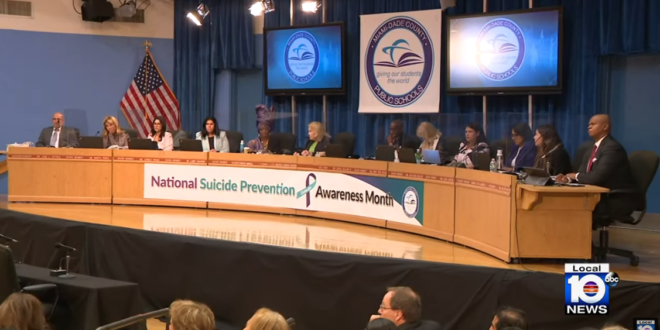 The Miami Dade School Board on Wednesday night struck down a proposal that would have recognized October as “LGBTQ history month” out of concern that it would violate the state’s Parental Rights in Education law, known by opponents as “Don’t Say Gay.”

Miami school board members passed a similar resolution acknowledging LGBTQ history month in 2021 by a 7-1 vote but found themselves in a different situation this fall under the Parental Rights in Education law.

Although the board’s own attorney said the recognition was on a solid legal footing, board members voted 1-8 against the idea after dozens of parents and community members raised their opposition at a marathon meeting. “I do believe this is in direct violation of our parental rights bill,” said board member Christi Fraga, who voted against the measure.

Watch the clip and you’ll see that the Proud Boys showed up to scream against us. Give the many tweets below a minute to fully load so you can see the photos.

When Miami's School Board considered observing LGBTQ History Month, opponents accused them of "indoctrination" and "imposing ideology" and said teachers should leave conversations about sexuality and gender identity to parents.https://t.co/fVNOFXYfzf

🚨 Outside the Miami-Dade school board right now — a group of 10+ Miami Proud Boys and allies are huddled around intimidating community members from supporting a resolution to declare LGBTQ History Month for October.

We are going to name them too. Standby. pic.twitter.com/iuF5FScM7A

Let’s meet the Proud Boys: This is Nowell Salgueiro, a Miami Proud Boy with a criminal record and an elected member of the Miami GOP executive committee. @MiamiDadeGOP pic.twitter.com/WHikypRP6v

This is Alexander Thomas Bermudez #Little1776 wearing a Floridians First shirt, the name of their defunct front group.

Alex has a long criminal rap sheet which includes armed robbery and even drug dealing on school property.

Next up is a secret Proud Boy, an 81 year old man named Herbert Silver aka “Vaca Loca.” He’s been hysterically screaming outside there for 4 hours about media, Hitler & more.

He’s a regular at demos & events with the Miami PB + can be seen wearing their hat at a holiday party. pic.twitter.com/ugI5aJkAP4

Next up we have Maurice Symonette of “Blacks for Trump” & a regular at Proud Boy functions.

A former member of the anti-Semitic Yahweh Ben Yahweh cult linked to murders and sex abuse, he was recently spotted hanging out w members of the -48 QAnon cult. https://t.co/n5klLlnKRi pic.twitter.com/TnPGp5BKFt

The notorious far-right disinformation account “Gays Against Gr**mers” teamed up with the Miami far-right to fund a billboard truck in front of the school board.

As part of their harassment campaigns GAG recently inspired a bomb threat against a children’s hospital in Boston. pic.twitter.com/UBiAuLMTds

Maybe she’s worried her hate agenda is gonna lose? Maybe thinking about how her masked Proud Boys pals outside are a bad look? Maybe picking her nose? 👃 pic.twitter.com/dsRlaH1n83

Is opposition to LGBTQ History Month at the Miami-Dade school board @MDCPS motivated by hatred?

From the mouths of the Proud Boys outside:

“Get that gay shit outta here … f**got” says the PB known as Lex 305 reacting to a trans pride flag. He then gives the white power sign. pic.twitter.com/iLaVL0MPV6

This is exactly what DeathSantis wanted in his first step law. The eventual goal of the far-right fascists is an anti-gay “Gay Propaganda” law like in Russia which if in effed here would shut down everything we’ve ever achieved.

Ann Kah weshlovrcm • an hour ago

He also is glad to see the goon squad come out to intimidate the board. He forgets that thugs remain thugs, and can also bully the folks who think they can manage them. This is why we discourage people from letting their leopards sleep on the bed, in case they happen to wake up without a face…

Gustav2 weshlovrcm • an hour ago

I similarly ask people when they choose their religions and if they actually tried out other ones to see what fit or if they just always went with what they were socialized into.

I’m struck again by how the “Proud Boys” are pretty much straight up thugs – and how they don’t seem to understand that ‘their’ group was stood up by the anti-minority DeVos family. I guess those leopards won’t eat their faces?

Til Tuesday • 18 minutes ago

At the rate things are going backwards in Florida, I wouldn’t be shocked to see the Miami School Board voting to recognize October as Anita Bryant month. : (

This is pretty bad. We’re used to them demanding we “go back” to our spaces, but the new rhetoric is just that we should not exist. Anywhere.

To them we’re not a culture, we’re just sick people and they want to make sure their kids growing up thinking that, too.

Gigi weshlovrcm • an hour ago

How did we get to a place where “Proud Boys”with lengthy criminal records that include extreme violence are influencing public school policy?

*Rights not applicable to LGBTQ parents or students.

If Florida teachers can say gay, then students might learn that American might not have existed without a gay man.

Baron Friedrich von Steuben, a Prussian military man hired by George Washington to whip the Continental Army into shape during the darkest days of the Revolutionary War, is known for his bravery and the discipline and grit he brought to the American troops.

I don’t get it. A lot of these “proud” “boys” are POC. It’s kinda like Jews joining the KKK. They might allow you to join but you’re just a ruse. They use you so they can say, “We’re not white nationalists. Look how many ‘spics’ we have in our group.”

SemiFriendly Atheist • an hour ago

For a group of supposed white supremacists, I see a lot of dudes who aren’t white.

I’m not sure what this means.

Nothing brings toxically masculine men of all races together better than the hate of women and sexual minorities.

Ann Kah • an hour ago

Why don’t the proud boys just embrace their new slogan, “Bullies want our own way”.