Drag shows are not sexual.  Drag shows are cosplay.  It is dress up, a lot of the time over top dress up.   It has no sexual orientation to it, and just because a person does drag doesn’t mean they are trans.   Look at the history of vaudeville and TV shows from the earliest days to the 1990s.   Ever see Bosom Buddies, a show about two guys dressing as women to live in a rent controlled building that is female only.     It was a sitcom, but there was no outrage about those men in a woman’s space.   Why now with trans girls?   Because the right wing managed to equate trans girls with sexual predation, with sexual misconduct.  The right wing needed a boogieman and used the group they already hate, the LGBTQ+.   The same with drag shows.   They are not really a part of the LGBTQ+ community because unless it is designed to be burlesque show which is sexy and done with both real women with some times drag.   But burlesque is not drag shows.   Again the right has taken a normal word that means one thing and created an image around it so every time it is mentioned the base thinks the worst thing possible.  That was their goal against CRT and it worked.  Now they are doing it with drag shows.   We must not let them weaponize the language this way.   This is a small gang of religious bigots who are managing to get their own way and hurt the entire LGBTQ+ community and we need everyone to stand up to them.  Now every day I read one to three stories of clergy raping / molesting kids.  Every day!  But I have yet to read one of a molestation happening at a drag queen story hour or a family friendly drag show.    Hugs

“We have successfully frozen their brand—’critical race theory’—into the public conversation and are steadily driving up negative perceptions. We will eventually turn it toxic, as we put all of the various cultural insanities under that brand category,” Rufo wrote. “The goal is to have the public read something crazy in the newspaper and immediately think ‘critical race theory.’ We have decodified the term and will recodify it to annex the entire range of cultural constructions that are unpopular with Americans.”  Right wing activist Christopher Rufo

Now the story from Joe.My.God 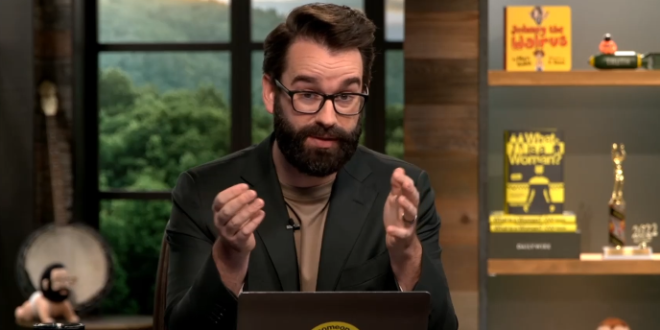 “Just like cancer, stopping it is not a gentle or a painless process. The farther along the cancer is, the more aggressive you have to be in fighting it.

“Culturally, we are approaching, if we haven’t already reached, a terminal state, which means we have to be all the more aggressive, which calls for two things.

“First, obviously involving children in drag events in any capacity should be outright criminalized everywhere. There is no other way.

“You know, this doesn’t stop until police are breaking down the doors at these places and carting the adults away in handcuffs.

“Charge them all as pedophiles. Throw them in prison, and whenever they get out, if they do get out, put them on the sex offender registry for life.” – Daily Wire host Matt Walsh.

Walsh last appeared on JMG when he declared that Disney’s black mermaid is “unscientific.”

The previous month he appeared here when he blamed the Buffalo mass shooting on pandemic lockdowns.

Earlier this year, we heard from him when he declared that lesbians will cease to exist over the next 30 years.

Walsh also claims that shooting people “is not against the law.” Walsh has declared that “everybody would be happier” if arranged marriages were mandatory.

Mine too. And well done choreography to that music. They don’t make cartoons like that anymore. Boomerang is a great channel where you can still watch them – including the really old Bugs Bunny and other WB cartoons.”A Corny Concerto” was awesome.

Between this, Twitter’s refusal to suspend Chaya Raichik and Lara Logan’s Blood Libel, we’re at the point where genocidal hate speech is becoming normalized and mainstreamed.

Arrest every adult at these “beauty pageants.” Charge them all as pedophiles. Yes, seriously.

I’ve never watched one of these atrocities, but are the judges women…
…or creepy old men?

Keep in mind, this douche nozzle also claimed in a tweet that gays have destroyed the institution of marriage more than anyone while admitting he’s been married three times (in this same tweet). 🙄

Children are in infinitely more danger at churches than they at drag shows.

Does Walsh think adults who accompany children to church services should be arrested and charged as pedophiles?

“Charge them all as pedophiles.” Luckily in America we don’t criminally charge people “as” or for “being” anything. Criminal charges come from doing things. When people leave out exactly someone needs to be charged for doing, you know it’s a smear job.

They are like bears that found some mayonnaise at the dump…..

I love how these sex-obsessed perverts always accuse others of sexualizing children.