Because rainbows make Jesus cry.  As I said in the last post on this guy, not everyone lives by his bible. Deliu said his family is Christian-Orthodox and considers homosexuality a sin, saying in the lawsuit it’s “not in accordance with their Bible.”  Gay people exist, and they have rights.   Gay kids exist and they have rights.   This child is in the 7th grade, he is quite aware of gender and sexual orientation, and sorry but not everyone is the same.   My rights, gay kids in the 7th grade don’t lose their rights because the bible says they are icky, and his daddy is a bigoted asshole.    Hugs 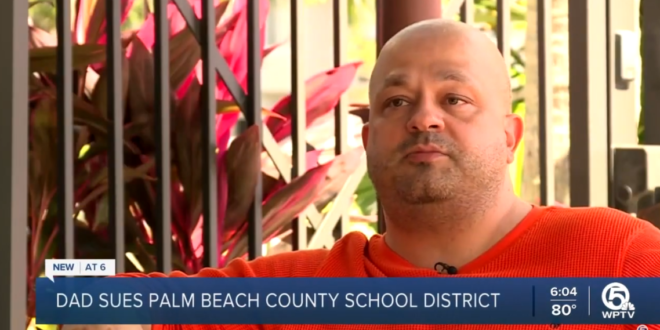 A Wellington father is suing the School District of Palm Beach County after he claimed his son’s teacher put up two LGBTQ pride flags in her classroom. Dr. Francisco Deliu’s 12-year-old son is in seventh grade at Emerald Cove Middle School.

Deliu filed a lawsuit on Oct. 12 against the school district, Palm Beach County School Board, the middle school, principal Dr. Eugina Smith-Freeman and teacher Rachel Raos. Deliu said his family is Christian-Orthodox and considers homosexuality a sin, saying in the lawsuit it’s “not in accordance with their Bible.”

Deliu claimed the teacher’s actions are a violation of Florida’s “Parents’ Bill of Rights” law, which went into effect in 2021. Deliu is asking for a jury trial and wants the court to declare the teacher’s [alleged] decision to discuss gay pride and homosexuality illegal.

Read the full article. Deliu also wants an apology from the school and the teacher to be posted on the district’s website. Wellington, it’s worth noting, is one of Florida’s wealthiest communities. Many of its homes include horse stables and Wellington hosts the annual US Polo Open as well as other equestrian competitions.

I’m mostly surprised that a doctor who lives in Wellington has a kid in public school.

vap JoeMyGod • an hour ago

He looks to be a lawyer
https://www.queerty.com/lit…

It surely isn’t his first go-round with making big accusations, either. In 2017, the New Zealand Lawyers and Conveyancers Disciplinary Tribunal found him guilty of nine different charges including “misconduct”, “unprofessional conduct” and “conduct unbecoming a lawyer”.

The misconduct charges resulted from a series of allegations the barrister made against two high court judges of “discrimination and racism by the Judges towards both counsel and clients, and corruption in carrying out their duties.”

Deliu was fined a quarter of a million dollars and his law license was temporarily suspended.

I love the part of the article where the guy says he’s a “libertarian.” I’m sure he has a great explanation for why libertarianism* means the state must affirmatively take actions to send the message that there is a lower caste of depraved people who must not be spoken about or acknowledged.

*We all know that real-world Ron Paul-style libertarianism wants exactly that, but it’s hilarious to watch them try to explain themselves.

Some affluent areas have public schools that rival the best private schools in their area. So I’m not surprised. The high home prices and high property taxes that fund those schools keep out anyone they don’t want there.

Stoned and loving it JoeMyGod • an hour ago

when the legislature passes laws designed to allow the GQP to loot the treasury, one must establish standing before suit

TampaZeke • an hour ago

GO BACK TO ROMANIA where you can get all of the Orthodox Christianity you crave!

ChrisMorley TampaZeke • an hour ago

He’s also pissed of with Romania:

“The dad, a self-described ‘live and let live’ libertarian”

So no neck here wants the state to impose rules against those he finds offensive. Yeah, that’s a real live and let live libertarian there. Lol

I guarantee you this concerned father has never once attended a PTA meeting, volunteered, or gone to a parent teacher conference in his child’s life.

Kieth ChristopherM • an hour ago

It’s ok to be an open homophobe in our society. Whenever you see it racism is just below the surface though.

Jack Frost ChristopherM • an hour ago

Oh, those are the loudest ones. Not really a part of their kids education until they get to hate on a minority group.

Rebecca Gardner • an hour ago • edited

Ok, which grade? Is 7th grade too old to be covered by this? Also, it says nothing about a flag, it only prohibits discussion.

The law was written so poorly and so broadly that it allows for any parent to sue for anything and to let the courts or jury decide.

Its supposed to chill speech these asshats dont like so in this case they assumed all LGBTQ teachers/school officials would just pull all the “gay stuff” out of the classroom in advance.

Yes, it was more of a scare type law that was so vague that teachers would be afraid to do anything, even putting up a pride flag. I hope this is a test case that turns out well to knock down this law.

It would be funny if some wise-ass elementary school let boys and girls use whichever bathroom they wanted to because “discussing gender identity was forbidden by law and discussing or asking students what gender they are might be illegal.”

Maybe he wants to expand on the grade levels. Maybe make it K-12?

I wouldn’t put it past anti-gay people to start with a wedge like K-3 and then work to expand that outward.

That “Don’t Say Gay” law in Florida HAS to be unconstitutional. Besides, being “against Jesus” has no bearing on education, unless you’re a Christian religious school. I hope he’ll get told to go away and take his jury trial with him; but it’s Florida, so who knows?

Yeah, Jesus was always ragging on those filthy queers…

Didn’t they just rule for freedom of speech of teachers in the ‘praying coach’ case? of course, they will contradict themselves in a case like this when they rule -against- freedom of speech.

4 thoughts on “Florida Man Cites “Don’t Say Gay” Law In Lawsuit Over Pride Flag In Classroom: This Is Against Jesus [VIDEO]”