When will we take seriously these religious fundies and their threats to force everyone to follow the dictates of their religion?    They want to end democracy and have already shown they will lie about history, science, medical facts, every part of reality to get their way.    They want control over every aspect of everyone’s lives.  Your private lives, your public lives, they demand the right to tell you how to live and what you must do.   You will pay to support their churches, you will worship as they say, you will educate your kids the way they demand, you will watch what they require you to, marry and have sex only the way they tell you, this is the world they are trying to create.    Think Iran, think Saudi Arabia, any other theocracy you can imagine.   Dogs that love gravy think of the Puritans and the Spanish inquisition.   Hello future if these people are not stopped now.  Notice how Pence words it, forcing you to follow their religion is “pro freedom”!    What freedom is that for the rest of us, the freedom to do as we are told and live according to the dictates / doctrines of their churches.    Hugs 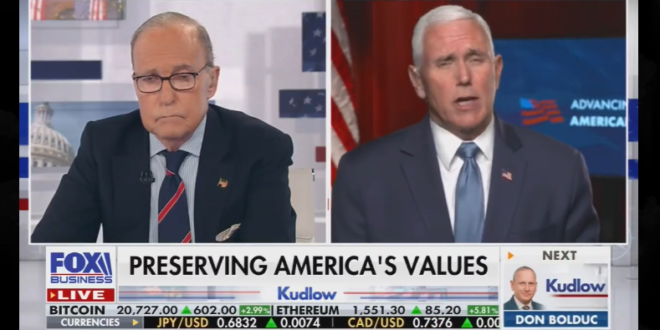 “The radical left believes that the freedom of religion is the freedom from religion. But it’s nothing the American founders ever thought of – or generations of Americans fought to defend.

“You know, I said today here in Houston that the source of our nation’s greatness has always been our faith in God, our freedom, and our vast natural resources.

“And the good news is, that after four years of the Trump-Pence administration, I’m confident that we have a pro-religious freedom majority on the Supreme Court of the United States.

Former Vice President Mike Pence: "The good news is, that after four years of the Trump-Pence administration, I'm confident that we have a pro-religious freedom majority on the Supreme Court." pic.twitter.com/GO1uW6FdPP

Robert Conner • a few seconds ago

The goal of religion is to become the law. And no one’s above the law, amirite?

Says the guy who doesn’t know what a scientific theory is.

Well, yes. I don’t want to pray to your god(s) or give my tax dollars to your social clubs. I also don’t want you to get to groom kids into your religions, that should be upto parents.

Lying idiot. There can’t be freedom of religion without freedom from having someone else’s forced on you. Go live in Iran or Saudi Arabia where your religion has second class status and let us know how you like it Mikey.

‘ nation’s greatness has always been our faith in God, our freedom, and our vast natural resources. …“

Some people’s freedom, usually to control others.

He actually believes this unlike many pandering politicians

He can’t read and is really stupid therefore

These things are written. You can read and understand

The first says government cannot stop you from being religious nor can it force you to be religious. It’s so strong in the latter that it’s actually called the establishment clause. Government is not only barred from forcing religion, it is barred from any activity “make no law” that supports religion

The scotus was wrong in maine. Wrong in all the illegal words on our money cases. Wrong on the capital visitor center case. They are political hacks pandering but Pence is a delusional simpleton.

Gregory In Seattle • an hour ago

Do not underestimate this creepy fanatic. He is a master of false sincerity and will lie and scheme fitting his party’s behavior pattern.

Evangelicals have a history of portraying The US as the ‘“New Israel/God’s new chosen people”. They don’t put it so bluntly, but it was the common undercurrent of my evangelical upbringing. America was founded as an Anti-Catholic/Anti-Anglican Protestant paradise. They actually wanted to keep Catholics out.

I think Pence would have a different view on “freedom from religion” if there were several teachers at an elementary school pushing Islam, Buddhism, Hinduism to their students.

The reason Maryland exists is because Catholics were persecuted, but the founders had had enough of established religions, which is why they made a rule against them.

And something he is not saying, at least not yet, is that they will also be saying only the right kinds of religions have freedom. This is something I keep reminding my Catholic and Mormon friends, when these folks come into full power, they will be up against the he wall right along with the Muslims, the gays and the liberals. They are just as hated as we are, but right now they need them.

It’s funny, because they claim to be Christian and their behavior isn’t like Christ. This isn’t about religion, it’s about control and always has been.

Religion is and always has been a system for controlling gullible masses. It existed as sets of laws before other systems of law came into existence.

In the US, you are free to believe what you want and that includes having no religious beliefs at all. The radical far-right wants a theocracy based solely on their interpretation of Christianity. No other religious belief will be permitted, not even pro-equality Christianity.

What, me worry? weshlovrcm • 2 hours ago

And if they succeeded, the 2000-plus different christian sects will all be fighting over which batshit crazy interpretation of the buybull (and nevermind which edition) will be the BOSS of everybody. Westboro Baptist comes to mind.

One thought on “Pence: You Have No Right To Freedom From Religion – JMG”