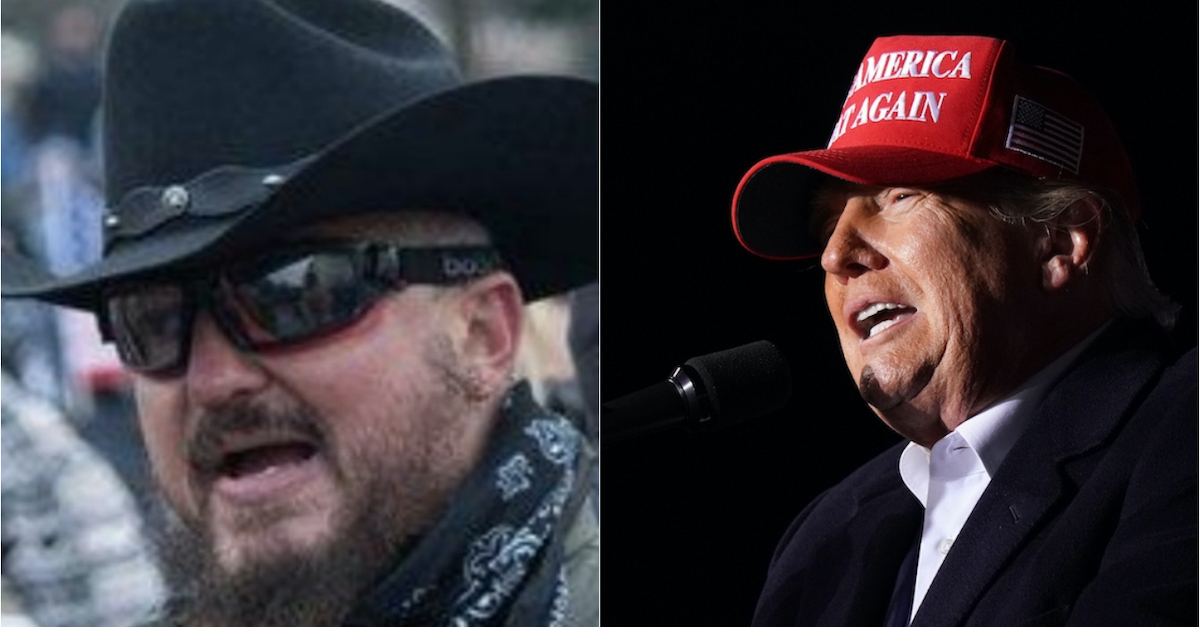 A government witness in the seditious conspiracy trial of Stewart Rhodes claims the Oath Keepers leader asked him to deliver a message telling then-President Donald Trump to seize power by force.

“You must use the insurrection act and use the power of the Presidency to stop him,” Rhodes allegedly told Trump in a typewritten message entered into evidence. “And all us veterans will support you and so will the vast majority of military.”

According to the testimony, Rhodes personally entered that message into the phone of government witness Jason Alpers, a military veteran with combat and special ops experience in Iraq and Afghanistan.

He testified that Rhodes passed on the message during his meeting with the Oath Keepers leader in the parking lot of a Fry’s electronics store in Texas on Jan. 10, 2021.

Rhodes, he claims, wanted him to pass the message to Trump, knowing that Alpers had a line to the 45th president.

“Not directly but indirectly,” Alpers testified.

Alpers said that he furtively taped the meeting with a recording device — which he said resembled a thumb drive — in case he needed to pass on the message to Trump.

“I was really using it for my protection, making sure that I had an accurate account of it,” he said.

That recording, which Alpers turned over to the FBI months later, was entered into evidence and played in court. It features a lengthy discussion of the Insurrection Act, which Oath Keepers members believed would allow Trump to militarize groups like them to keep him in power.

“I mean we heard he dropped the Insurrection Act, now we’re hearing he didn’t drop it,” Rhodes said.

“I’m hearing he did not,” he replied.

“Okay,” Rhodes said. “So what are you hearing?”

“Uh, that he hasn’t dropped it,” Alpers continued.

After some further discussion, Alpers predicted that the Trump would not ultimately invoke it.

“I don’t think the Insurrection Act’s gonna get signed, me personally,” he said. “That doesn’t mean that I’m not gonna take what we’re talking about and provide it to the right place, ok?”

By that, Alpers continued in the tape, he meant the “head guy.”

Asked by the prosecutor who the “head guy” was, Alpers clarified: “I meant providing the message to President Trump.”

That message, allegedly relayed by Rhodes to give to Trump, was grim.

“You and your children will die in prison, and us veterans will die in combat fighting against traitors who YOU turned over all the powers of the Presidency to,” Rhodes allegedly wrote for Trump’s consumption. The message also asked the former president to arrest members of Congress.

After first invoking imagery from the Civil War, Rhodes in the message turned toward the spector of World War II: “Be a Churchill, not a Chamberlain.”

Alpers testified that he did not pass on the message because he did not agree with it.

As a veteran, Alpers said, he’s seen combat, and the recording seems to show Alpers discouraging Rhodes from pursuing that course.

“I can tell you right now I don’t wish civil war on anyone,” Alpers said on the tape.

“We’re gonna have it bud,” Rhodes replied, according to the transcript.

Asked why he pushed back against Rhodes on that point, Alpers told the prosecutor: “Asking for Civil War to be on American ground […] that means blood is going to be shed on the streets where your family’s on.”

After Alpers finished his testimony, FBI agent Jennifer Banks returned to the witness stand to analyze cell phone tower data. According to the witness, that data placed Rhodes, SoRelle and Oath Keepers member Joshua James in the Dallas area, the location of the meeting, at the time.

[Image of Rhodes from DOJ, via Ford Fischer / News2Share; Image of Trump by Sean Rayford/Getty Images]