See how this has nothing to do with children and is all a political ploy to rile up the right wing base that is unable to accept advancements in society.   We have grown as a people, just as we did in every generation since the beginning of the species.   We don’t do what we did in the 1600, 1700s, 1800s, because we know better now.  But there are some people dreaming of a past that never really existed when they felt comfortable and in charge, they were the normal ones with the right to mock and insult the weirdos.    They want that again.   The other half wants their poor defenseless god to stop crying over men wearing dresses (something they basically did in Jesus’s time) and they know their god shutters in fear / loathing every time a male penis touches another male, regardless of the fact that opposite sex couples can do the same sex acts and their god loves to watch that.    Strange, isn’t it?    Hugs 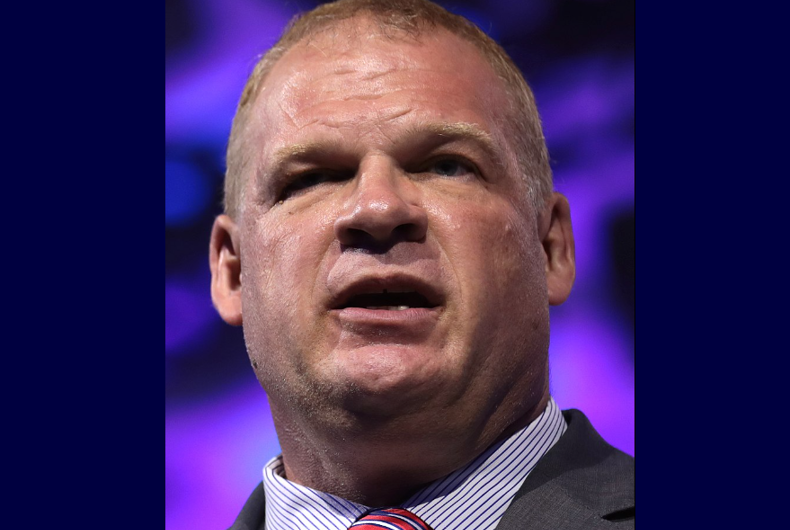 The former wrestler – who goes by Mayor Glenn Jacobs (R) when he’s not performing in flashy outfits – won reelection as the mayor of Knox County, Tennessee in August and performed on multiple occasions with other wrestlers who dressed as women in front of thousands of children.

Now he says he’ll ban family-friendly drag shows anywhere “on Knox County property,” though he has no power to do so. “Currently,” says the mayor, “no law on the books gives me authority.”

The empty pro-wrestling-style boast was another attack on the LGBTQ community inspired by the current Republican obsession with quashing LGBTQ rights, particularly when it comes to gender nonconformity.

Twitter was quick to react to Jacob’s hypocrisy Tuesday, when he claimed “my office has been flooded with calls concerning all-ages drag shows,” just in time for next Tuesday’s midterm elections. Jacobs went on to decry “the sexualization of our children.”

For the uninitiated, drag is an integral part of some of WWE’s often bizarre storylines.

You main evented a show that had an Evening Gown Match between two dudes. There were literally thousands of kids in the audiences. pic.twitter.com/YCGOet6t7Y

So no children will be allowed at WWE events? pic.twitter.com/zEh6OWrLMx

Did Glenn Kane Jacobs have this same energy when Vince McMahon asked male wrestlers to dress in drag in front of children? Did he have it for Goldust?

Multiple wrestling fans called out Jacobs for a storyline in which he kidnaps another wrestler’s girlfriend, rapes, and impregnates her.

you were literally in a wrestling storyline where you raped a woman, got her pregnant, and then a man kicked a doll representing the stillborn baby across the arena. shut the fuck up 😭 https://t.co/MNrFJRYFlu

EXCUSE ME!! You took part in a WWE storyline (in front of kids) in which you RAPED a female wrestler and got her pregnant!! NO! YOU! DON'T!! 😠😠😠😠😠 https://t.co/X4H7NWebLF

When I was a kid, Kane was always my favourite WWF wrestler and I loved how dangerous he was.

Every time he tweets, he makes it more and more clear that real danger is the man behind the Kane character. https://t.co/DmFNBt3yVA

The callback that best applies to Jacobs today may have been this amped-up crowd favorite, now employed by Twitter users.

Didn’t you attach a car battery to Shane McMahon’s balls on TV? https://t.co/Jw1I3YIYkO