Wow.  My good brother I met when I really needed a brother is like 6’6″ or maybe 6’8″ and he seems huge to me.   His hands go completely around cups or glasses and do not fit in finger handles.    The type of great wonderfully natured guy you could cuddle with disappearing into him.  My brother has to duck going into most places and even my own home.   I used the ring tone Big John.

I cannot imagine a guy even taller than that.   6’11” how does he even fit in a car, or a normal table seat.  Imagine him at your table for dinner, his knees would hit the bottom of the table and to eat he would have to bend down very far to eat every bit or lift the plate.  How uncomfortable.   But think of everything else in your home.  Imagine if everything in your home was at the level of an elementary student, of say a 5th grader.  I have gone into bathrooms at theme parks and seen all these urinals at like half height, like if I was to use them my crotch would be at the top or over the fixture.   So if you think how it is to stand at your counter or sit on your toilet, now expand yourself to 6’6″ or 6’11”.   My god how do you sit on a normal toilet and not have your knees in your chin.   Ok I will stop now and get to the article.   I watched the video and remember this is a macho man sport and it made my eyes leak.    Hugs 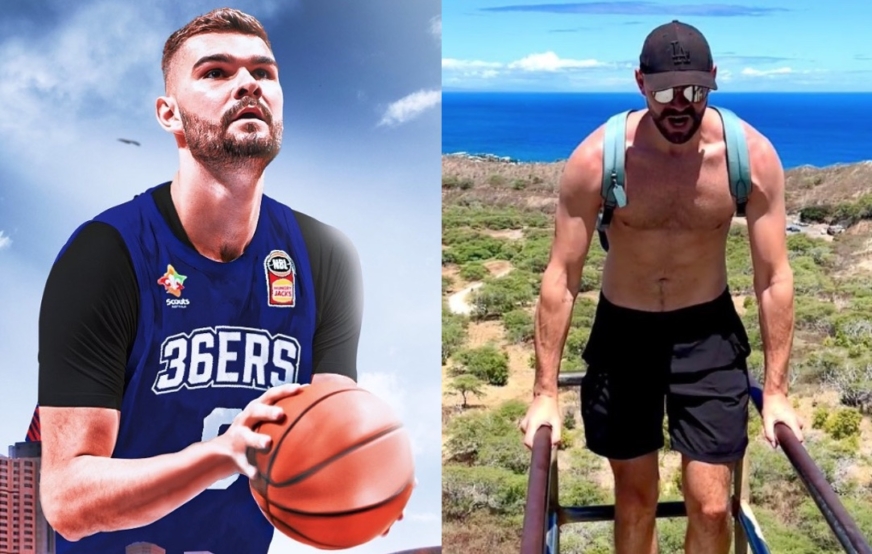 Humphries, who is 24-years-old and stands at 6’11”, had previously told himself that when he joined a new team, he would publicly come out. So when signed on to play for Melbourne United in the 2022-23 season, he bravely kept his word, and then some.

In a video shared on social media that instantly went viral, the starting center not only revealed he’s gay to his teammates, he also spoke from the heart about his past struggles and offered a hopeful message to closeted athletes. He also penned an emotional op-ed on CNN.

His new team’s reaction was also filmed, and it’s truly inspiring to see them embrace him so fully:

“A few years ago, I fell into a very dark place, a very lonely place,” Humphries said to his United teammates, coaches, and executives.

“I couldn’t be who I am, and I attempted to take my life. The main reason behind me becoming so low and being in that point is because I was very much struggling with my sexuality and coming to terms with the fact that I’m gay.

“I hated it about myself. I was disgusted at myself. I thought that I could not be that person within our environment, within a basketball environment. It wasn’t until I was in a community that’s full of pride and happiness and joy; it was a big wake up call for me.

“But then came the big question mark of how do I be a basketball player, and how do I join a new team when I’ve finally come to terms with this about myself and I don’t wanna hide who I am anymore. I decided that, if I’m gonna join a team, that I’m gonna come out publicly, and just make sure people know that you can live. And you don’t have to hide, just because you’re an athlete.”

Humphries is just the second male basketball player to come out as gay while playing in a top-tier league, after former NBA player Jason Collins came out while playing for the Washington Wizards in 2013.

“We, as athletes, as professional athletes, have a responsibility to set examples for people,” Humphries said.

“That’s my goal behind this: make sure people know you can be whatever you want, no matter who you are or what you do. You can be big Ice and be gay, and you can still be a great basketball player and be gay. You can do whatever you want. It has nothing to do with your sexuality, or who you are, or who you’re meant to be, or who you’re expected to be. I just want to be myself. I discovered this is my purpose in life, and I’m gonna give it my best go.”

And since we already know how his awesome team reacted, here’s what fans on Twitter are saying:

All the love and support to you. BE YOU. The world is better because of it.

Welcome (publicly) to the family. 🌈❤️

Thank you for sharing this so publically and so proudly. Your bravery sets such a wonderful example for us all.

The courage it took for you to have this conversation and openness it amazing. Much respect to you. I’ve followed you while at #BBN UK and still do. Continue to do great things and being an inspiration. #BBN 💙

The courage it took for you to have this conversation and openness it amazing. Much respect to you. I’ve followed you while at #BBN UK and still do. Continue to do great things and being an inspiration. #BBN 💙

Thank you, Isaac. It’s time the sports world takes this step forward and welcomes people to be more honest about who they really are. You’re one of the leaders and you’re helping to create more by sharing these words.