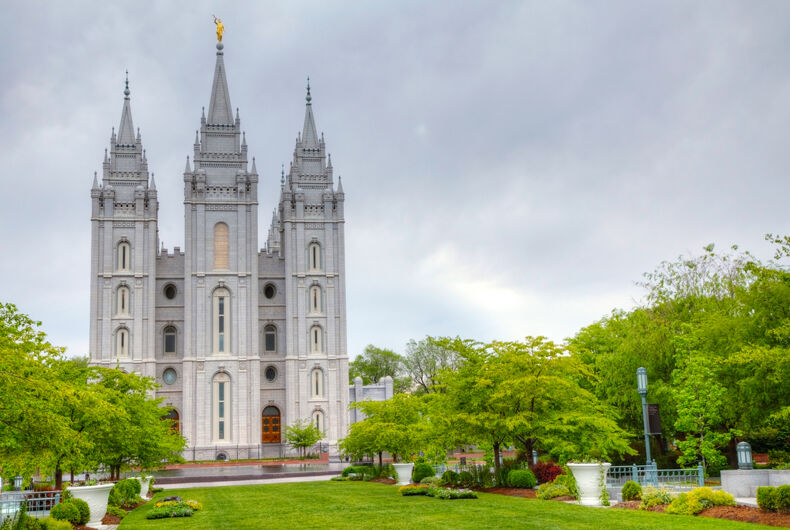 Following a history of anti-LGBTQ policies and decrees, the nearly 17-million-member Mormon Church of Latter-Day Saints (LDS) released a stunning declaration supporting the federal Respect for Marriage Act that would codify federal and state recognition of same-sex marriages. LDS expressed its support because the bill also protects the rights of any denomination not to perform these ceremonies.

“We believe this approach is the way forward,” reads a statement posted on the church’s website. “As we work together to preserve the principles and practices of religious freedom together with the rights of LGBTQ individuals, much can be accomplished to heal relationships and foster greater understanding.”

The statement goes on to reiterate that the Church does not condone same-sex relationships, which it regards as sinful.

The Church has a lengthy and oppressive history toward LGBTQ people.

“Homosexual behavior violates the commandments of God, is contrary to the purposes of human sexuality, distorts loving relationships, and deprives people of the blessings that can be found in family life and in the saving ordinances of the gospel,” states the Handbook of Instructions of the Church of Jesus Christ of Latter-day Saints. “Those who persist in such behavior or who influence others to do so are subject to Church discipline. Homosexual behavior can be forgiven through sincere repentance.”

These words supposedly expressed God’s revelation to the leadership of LDS and were reaffirmed in 1995 when the First Presidency and the Quorum of the Twelve Apostles entered the debate on the parameters of marriage by issuing “The Family: A Proclamation to the World.”

It stated in part, “We, the First Presidency and the Council of the Twelve Apostles of the Church of Jesus Christ of Latter-day Saints, solemnly proclaim that marriage between a man and a woman is ordained of God and that the family is central to the Creator’s plan for the eternal destiny of His Children.” It claimed that the power to create children “is not an incidental part of the plan of happiness. It is the key – the very key….This commandment has never been rescinded.”

Leaders and members of the Church, therefore, justified contributing an estimated 22 million dollars to the 2008 California Ballot 8 initiative campaign, which succeeded in limiting the rights and benefits of marriage to one man and one woman.

If the Church’s position on same-sex attractions, expression, and marriage for same-sex couples was not clear enough, former LDS President of the Quorum of Twelve Apostles, Boyd K. Packer, referred to homosexuality throughout a sharply worded sermon as “wrong,” or “basically wrong,” “wicked,” “impure,” “unnatural,” “immoral,” “against nature,” “evil,” and as a threat to civilization.

Packer’s sermon – delivered to more than 20,000 participants in the LDS Conference Center in Salt Lake City and millions more watching on satellite television at the Church’s 180th Semiannual General Conference in October 2010 – stated, “We teach a standard of moral conduct that will protect us from Satan’s many substitutes or counterfeits for marriage. We must understand that any persuasion to enter into any relationship that is not in harmony with the principles of the gospel must be wrong. From the Book of Mormon we learn that ‘wickedness never was happiness.”‘

Packer continued, “There are those today who not only tolerate but advocate voting to change laws that would legalize immorality, as if a vote would somehow alter the designs of God’s laws and nature. A law against nature would be impossible to enforce….To legalize that which is basically wrong or evil will not prevent the pain and penalties that will follow as surely as night follows day….If we do not protect and foster the family, civilization and our liberties must perish.”

Under this backdrop and literally one block from the Mormon Temple in Salt Lake City, I was invited to present a keynote address to the delegates at the Eighty-First Annual Convention of the Rocky Mountain Psychological Association on April 16, 2011.

I titled my address, “Homophobia: How We All Pay the Price,” based on the notion that homophobia is pervasive throughout society and we are all at risk of experiencing its harmful effects.

Following my keynote address, a number of the convention delegates came to the podium to talk about how much they had gained from my remarks. I was enormously touched by the words of three delegates who moved me to tears.

A woman approached me with moistened eyes and tears running down her cheeks. Unable initially to speak, she hugged me and sobbed on my shoulder. She ultimately expressed how much my words had moved her, and through her sobs, told me the story of how her stepson, a young gay man, had killed himself three years earlier. She said members of her LDS community had shunned and scorned her when the young man’s sexual identity had become known.

Words failed me as we continued to hold and comfort each other.

Looking on was another woman who proceeded to join us. “I have a nine-year-old son, whom I am quite certain is gay,” she told us, as tears also streamed from her eyes. “I am forced to make a decision,” she said with urgency in her voice. “I must leave my LDS church and save my son from a possibly tragic fate if I remain. My son is the most important thing in my life, and I refuse to lose him to the narrow views of the people around me.”

While sad, she also felt somewhat empowered in her decision to separate from what she considered abuse and misunderstanding by her church community.

As I was on my way out of the large conference hall, I noticed a man, red-eyed, who beckoned me. “I am a professor at Brigham Young University,” he explained. “Until your talk, I had never truly understood the hurt the LDS policy has on real people, but you personalized the issue for me.” With a tone of deep sincerity in his voice, he said, “I commit to you that I will bring this message to my campus when I go back to work on Monday.”

The late Dr. Derrick Bell of New York University Law School put forward the theory of “interest convergence,” the idea that white people will support racial justice only when they understand and see that there is something in it for them (i.e. when there is a “convergence” between the interests of white people and racial justice).

Bell asserted that the Supreme Court ended the longstanding policy of “separate but equal” in the 1954 case of Brown v. Board of Education because it presented to the world, and in particular to the Soviet Union during the height of the cold war, a United States that supported civil and human rights.

Another example: the Church of Latter-Day Saints president, Brigham Young, instituted a policy on February 13, 1849. Emanating from “divine revelation” and continuing until as recently as 1978, the policy forbade the ordination of Black men to the ranks of LDS priesthood.

This policy prohibited Black men and women from participating in the temple Endowment and Sealings, which the Church requires for the highest degree of salvation. The policy likewise restricted Black people from attending or participating in temple marriages.

Young attributed this restriction to the sin of Cain, Adam and Eve’s eldest son, who killed his brother Abel: “What chance is there for the redemption of the Negro?” stated Young in 1849 following the declaration of his restrictive policy. “The Lord had cursed Cain’s seed with blackness and prohibited them the Priesthood.”

While making a speech to the Utah Territorial Legislature in 1852, Young further asserted, “Any man having one drop of the seed of [Cain]…in him cannot hold the Priesthood, and if no other Prophet ever spoke it before, I will say it now in the name of Jesus Christ I know it is true and others know it.”

In another instance, Young said: “You see some classes of the human family that are Black, uncouth, uncomely, disagreeable and low in their habits, wild, and seemingly deprived of nearly all the blessings of the intelligence that is generally bestowed upon mankind….Cain slew his brother. Cain might have been killed, and that would have put a termination to that line of human beings. That was not to be, and the Lord put a mark upon him, which is the flat nose and black skin…that they should be the ‘servant of servants’; and they will be, until that curse is removed….”

Joseph Fielding Smith, Tenth Prophet and President of the LDS Church wrote in 1935 that “Not only was Cain called upon to suffer, but because of his wickedness, he became the father of an inferior race. A curse was placed upon him and that curse has been continued through his lineage and must do so while time endures….”

It seems that the Twelfth LDS Church president, Spencer W. Kimball, who served from 1973 to his death in 1985, was touched with such a “vision” and, therefore, reversed the ban, referring to it as “the long-promised day.”

We can ask today whether “revelation” or mere pragmatism was the determining factor in permitting Black people full membership rights in the Church at a time of ongoing and heightened civil rights activities in the United States and an increase in LDS missionary recruiting efforts throughout the African continent.

We can also ask whether “revelation” or mere pragmatism was the motivating consideration for abandoning its promotion of polygamous marriages at a time when the United States Congress demanded this as a condition for the admission of Utah as a state within the United States.

In another example, the issue of slavery became a lightning rod in the 1840s among members of the Baptist General Convention, and in May 1845, 310 delegates from the Southern states convened in Augusta, Georgia to organize a separate Southern Baptist Convention on a pro-slavery plank. They asserted that to be a “good Christian,” one had to support the institution of slavery and could not join the ranks of the abolitionists.

Well, again, whether by divine inspiration or interest convergence stemming from political pressure and shrinking church membership, 150 years later in June 1995, the SBC reversed its position and officially apologized to African Americans for its support and collusion with the institution of slavery (regarding it now as an “original sin”), and also apologizing for its support of “Jim Crow” laws and its rejection of civil rights initiatives of the 1950s and 1960s.

LDS support for the Respect for Marriage Act may come from the Church’s awareness of its own self-interest to “come out” publicly to defend the right of same-sex couples to legally marry since overall, approximately 70% of U.S. residents support it following the 2015 Supreme Court decision granting this right nationwide.

Or, rather, was it divine revelation?