This morning I noticed that Tildeb left a link to a story of a man claiming to be trans who clearly was trying to be offensive.   Bad wig, oversized fake breasts that swelled to almost more than arm’s length hung down over his belt.  The breasts had over large nipples sticking out.    As soon as I seen it I knew it was someone trying to troll everyone and to mock the idea of tolerance and acceptance.  Just like a white person doing black face with exaggerated facial features, way of talking, and gestures.   And I was correct.   Why do some people need to be assholes?  Why can they just not accept that other people who are not like them exist and are just as valid as they are.    Hugs

There is the most titillating rumor being bandied about the interwebs right now. And while it may or may not be true, it’s certainly food for thought. It concerns “Kayla Lemieux,” the infamous trans-woman shop teacher at Oakville Trafalgar High School (OTHS) in Ontario, Canada.

An anonymous poster on an online forum recently made a claim about Lemieux’s shop class back when “Kayla” was still Mr. Kerry Luc Lemieux. The post reads:

This dude is gaming the system. An anon here yesterday was in this dude’s class. This teacher was almost fired for ‘toxic masculinity’ last year, as well as not embracing woke culture. He’d drop redpills to his class, such as how silly gender neutral bathrooms are. The school board hates him.

He’s now upping the ante to exploit the very clown world the school and society itself created. His long game is most likely to get fired, and then sue for discrimination. There is no other explanation.. No better way to troll clown world than to become an over-the-top caricature of a woman. 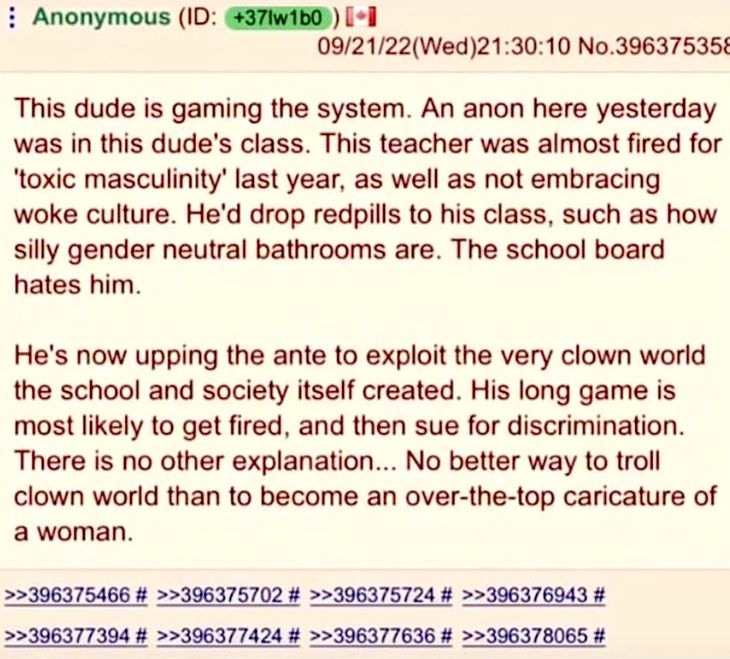 File this allegation under “Huge if True” (lol). Imagine for a moment that the anonymous person is telling the truth. If that is the case, then this teacher is the greatest hero the sane world has fronted yet.

If Lemieux is indeed pranking the school board, then he is a genius. When images of the trans-busty high school shop teacher began spreading like wildfire online, the outrage was swift and formidable. OTHS and the Halton District School Board (HDSB) went on the defensive — and it quickly became evident that they had painted themselves into a corner with their mindless commitment to “inclusion.”

“We are aware of discussion on social media and in the media regarding Oakville Trafalgar High School. We would like to take this opportunity to reiterate to our community that we are committed to establishing and maintaining a safe, caring, inclusive, equitable and welcoming learning and working environment for all students and staff,” said OTHS in an email sent to parents and obtained by feminist new site Reduxx.

HDSB similarly tied its own hands when it released its “Gender Identity & Gender Expression in Schools” policy a year ago. The policy states, in part:

The Halton District School Board (HDSB) recognizes the rights of students, staff, parents/guardians and community members to equitable treatment without discrimination based upon gender identity and gender expression.

The HDSB is committed to establishing and maintaining a safe, caring, inclusive, equitable and welcoming learning and working environment for all members of the school community including students, staff, parents/guardians and community members who identify as, or are perceived as Two-Spirit, Queer, trans*1, Non-Binary, Intersex, and those who are questioning their sexual orientation and/or gender identity(ies).

Is Lemieux actually an undercover conservative activist engaging in the Alinskyite tactic, “Make the enemy live up to its own book of rules”? Is he exposing the utter folly of the transgender craze with his “gender identity expression”?

Some speculate that Lemieux is pulling his stunt so he can force the school board to fire him — and then whack them with a big-money lawsuit. That would be an excellent next development: please, please let transgender first-world made-up gobbledy-gook be forced to defend itself in court.

The HDSB policy states that “The student’s self-identification is the sole measure of their gender.” The Ontario Human Rights Commission, which the school board cites as the authority behind its code, defines gender identity and expression thusly:

Gender expression is how a person publicly presents their gender. This can include behaviour and outward appearance such as dress, hair, make-up, body language and voice. A person’s chosen name and pronoun are also common ways of expressing gender.

The lunacy of insisting that “gender” is nothing more than what anyone says they are feeling at any given moment is the most ludicrous and socially destabilizing tenet the Left has come up with yet. While the fascinating rumor may be just that, a rumor with no basis in reality — if Madame Lemieux turns out not to be the awesome troll I hope he is — then here’s hoping someone else gets on it at once.

Here is another story that repeats the idea that this guy is trolling a school board that he has fought with for years, trying to get fired so he can sue.   Hugs

2 thoughts on “And it appears to be a prank to dicredit trans people.”