This was at a church for dogs that love gravy.   But no dissent will be tolerated from the maga thug rule.   The Christian Taliban has spoken, and head priest DeathSantis says no men wearing dresses except priests.   Please note that these thugs did manage to get the event canceled as the church and the promoters were scared, worried about violence to the people coming to see it, the performers, and the kids.   The harm was not the show, but what these thugs would do to the people at the show.   Complete lawlessness.    And all these police that can smash down black peoples doors, arrest little old ladies for a $77 dollar trash bill wouldn’t provide safe access and coverage for the event.   So what do these thugs shut down next?  A Muslim event?  A political event from the party they don’t support?  So far they have shut down school board meets and got their way on changing how things are done in schools.   No masks, no LGBTQI+ acceptance programs, so what next limiting girls to only certain grades?   Or shutting down Buddhist temples?  Hey that is the way we do government now, attack anyone who disagrees, lash out and demean others.  The republican party has shown the way with trump, Christ Christy, DeathSantis, and the entire Marge Greene congressional crew.   In one of the clips a Proud Boy protester demands to know what bible are they reading at (from).   Also for people claiming the moral high road they love to shout the word fuck over their bullhorns on public streets.  I don’t get upset over swearing but I bet the parents driving / walking by with their children were not too happy about it.  Think of this Nazi shit marching down your sidewalk in front of your home and going to attack … well you name the establishment that Nazi’s love to attack and destroy  Hugs 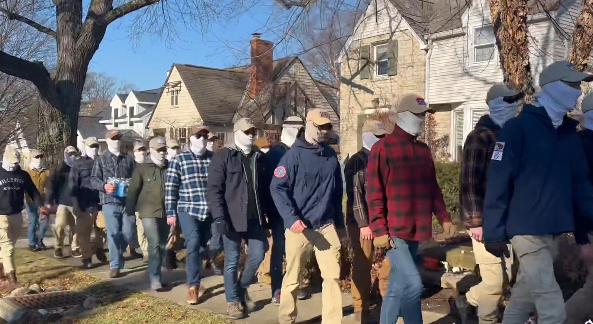 An Ohio school says an internal dispute over security prompted a last-minute cancellation of a weekend children’s storytelling event featuring performers in drag amid a planned protest by a far-right group.

The Red Oak Community School’s “Holi-Drag Storytime” event was to have been held Saturday morning at the First Unitarian Universalist Church of Columbus, where the school is based. The Ohio Chapter of the Proud Boys last month announced plans to attend and protest the event.

About 50 to 70 members of the Proud Boys and other groups had gathered on the sidewalk on roads leading to the church, shouting, chanting and holding signs.

Previously, the Columbus and Central Ohio LGBTQ+ Leadership Roundtable, a group that consists of Stonewall Columbus, Kaleidoscope Youth Center, HRC Columbus, Equitas Health and LoveBoldly, requested that the community not show up to counterprotest the Proud Boys at the Holi-Drag event.

“This situation is potentially volatile and dangerous, and the safety of the children, families, performers and our community are of paramount importance,” the Leadership Roundtable said in a statement. “Our actions must be in service to their protection.”

See the final video below for today’s message from the event’s organizers. Give the tweets below a minute to fully load.

Proud Boys have arrived outside the church where the drag storytime event was to be held here in Columbus, Ohio pic.twitter.com/NTVeRgH4l3

Several armed individuals show up at the protest across from the church. They did not say any specific group affiliation, Columbus Police came over to speak with them briefly and request safe firearm handling pic.twitter.com/BEZqCutn0F

Chants of “Feds!” from the Proud Boys as Patriot Front marches past them outside the church pic.twitter.com/Q1ck976Yut

A planned Holi-Drag Storytime event has been cancelled in Ohio after the Columbus Proud Boys announced plans to protest this Saturday morning. Fencing blocking off the parking lot and cancellation notices have been put up outside the venue at First Unitarian Universalist Church pic.twitter.com/0a4uXYlyQe

Police officers, about a dozen and a half in number, stationed a couple blocks away from the protest here in Columbus pic.twitter.com/ItFK3SYdCS

The group ‘White Lives Matter Ohio’ is out a couple blocks from the church, with some doing Sieg Heil salutes in Columbus pic.twitter.com/gbj4zgydo8

Some interactions between Proud Boys and passing cars along the road outside the First Unitarian Universalist Church pic.twitter.com/aniRPobynt