With these haters / bigots lying and making things up along with projection is the standard way they do stuff.   They claim the other side is promoting violence while they get the Proud Boys to attack drag queen events.   They claim the other side is full of hate while they call the LGBTQ+ evil.  Another thing she claims unnamed studies that find parents find they are unable to stop their kids from being trans or non-binary, implying that laws and the left are blocking the wishes of good god loving parents to take care of their kids. The truth is parents cannot stop their kids from being born with a different gender than assigned at birth or being born non-binary but that is how they are when they are born!   These people who push the idea that people can be converted to a gender are the same people who support the totally debunked idea of conversion therapy for sexual orientation.    Hugs 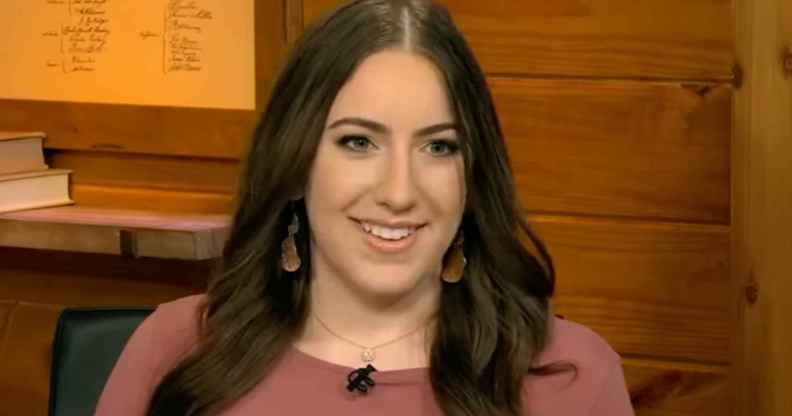 Libs Of TikTok creator Chaya Raichik has said LGBTQ+ people are “grooming children” and are “evil” in a disturbing Fox News interview.

Raichik, the figure behind the virulently anti-LGBTQ+ Twitter account known for encouraging pile-ons and spreading misinformation, elaborated on her belief that the LGBTQ+ community is a “cult” in an interview with host Tucker Carlson.

In the hour-long interview, Raichik and Carlson discussed her since-debunked claim that certain children’s hospitals were performing hysterectomies on trans teenagers.

Carlson asked Raichik if she had any “theories” about what was going on with “evil” people who offer affirming care to minors.

Raichik replied: “The LGBTQ community has become this cult and it’s so captivating, and it pulls people in so strongly, unlike anything we’ve ever seen.”

She went on to claim LGBTQ+ people “brainwash” others to “join” their movement and that it’s “really, really hard to get out of it”.

Raichik also referred to unnamed “studies” on parents who find they cannot stop their children from being trans or non-binary.

She said the situation is “unlike anything we’ve ever seen”, adding that it’s “extremely poisonous”.

Carlson asked Raichik if she sees a “spiritual component to any of this”, adding: “I don’t think this makes sense at all.”

“No, it doesn’t make any sense and I think – I think they’re evil,” Raichik replied.

Chaya Raichik went on Tucker Carlson and said the "LGBTQ community has become this cult… It's extremely poisonous." She later says "They're just evil people, and they're out to groom kids. They're recruiting."

This is one of the most bigoted interviews I've ever heard. pic.twitter.com/0tVe9WONOH

“And sometimes we try to break it down a lot and we discuss why this is happening, what’s happening and whatever, and I think sometimes the simplest answer is, they’re just evil.

Libs Of TikTok refers to LGBTQ+ people as ‘groomers’

This is far from the first time Raichik has shared anti-LGBTQ+ rhetoric; through her Libs Of TikTok social media accounts, she has pushed false and misleading comments about teachers, medical providers and children’s hospitals.

Since the account first came to prominence, Raichik has described people who teach children about gender and sexuality as “groomers”. She has also used her platform to hit out at all-age drag shows.

Her most controversial moment came when she claimed Boston Children’s Hospital was performing hysterectomies on trans minors. In the weeks after she publicised her since-debunked claims, staff faced death threats and the hospital was targeted with two anonymous bomb threats.

Raichik originally tried to keep her identity a secret, but her real name was eventually revealed by the Washington Post.