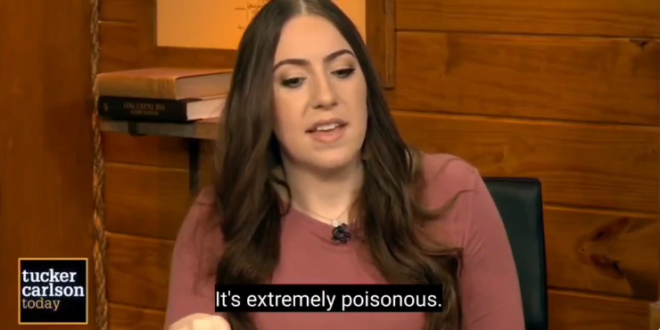 “When I was doxxed, someone from Ron DeSantis’s team called me. She said, ‘The governor wanted me to give you a message. If you don’t feel safe, if you need a place to go, to hide, to stay, you can come to the governor’s mansion.’

“She said, ‘We have a guest house for you, and you can stay as long as you need. I was almost in tears. He took time out of his extremely busy schedule to send someone to call me to make sure I’m safe.

“It was incredible, I don’t even have the words for it.” – Chaya Raichik, creator of the Twitter account LibsOfTikTok.

Raichik began posting content denigrating liberals on her personal social media accounts around April of 2020, but rebranded as Libs of TikTok a year later.

Raichik started by poking fun at Anthony Fauci, the country’s chief medical advisor at the start of the COVID-19 pandemic.

Then she started spouting hate toward Black victims of police violence before repeatedly depicting queer and trans people as predators who endangered children.

Her so-called doxxing was merely being named by the Washington Post as the person behind the account that has incited violent and often armed extremists to protest outside of LGBTQ events.

It’s likely that the DeSantis flack who reached out to her was the viciously anti-LGBTQ Christina Pushaw, who was his spokesperson at the time.

Where do the people she doxxed go to be safe? https://t.co/Cszc5zqk6B

When you have a Supreme Court that has made it clear it’s okay to declare open season on LGBT people, this is the result.

In less then 5 hours after the Tucker interview they were able to identify Chaya Raichik's (LibsOfTikTok) face & attire while on the Capital Grounds on Jan 6th.pic.twitter.com/4o5sc4bpj9

I would add that the WaPo article identified her using publicly available information.

It’s really something, the way social media has helped make psychopaths and grifters more successful than they ever could have been in any previous era.

On WHAT does this evil bitch BASE anything she says but her own vile bigotry?! What gives her ANY authority or credibility to speak on ANY issue, let alone to slander, denounce, and DEMONIZE whole groups of people based on NOTHING but LIES and her malicious FEELINGS?! Why do the serious media refuse, in their role as the “Guardians of Democracy,” to call out and DENOUNCE the right-wing media for spreading hate propaganda, for indulging in stochastic terrorism?! Because that’s ALL this is, and it has NO PLACE in ANY forum that gives it wide exposure in a modern democratic society!

It belongs nowhere but the GUTTER PRESS, which all decent people and all true journalists regard with nothing but CONTEMPT! There is no difference between THIS and giving wide exposure to spokesmen from the KKK or the American Nazi Party! This is the same kind of rabid, dehumanizing defamation the Nazis engaged in against the Jews under Hitler. Those engaged in it and in enabling it, in helping it spread its POISON, should be DENOUNCED by every true journalist in this country, by everyone who holds the truth and the principles of genuine democracy dear! That it is NOT denounced, and roundly, is a clear sign of advanced decadence, of societal ROT!

Fox Noise is the gutter press and what gives her authority is the Old Testament.

I never thought after the gains we’ve made in civil rights that we would slide backward so fast and without anything being done to these thugs. Find the shit on this bitch and all the other ones who would give her a voice.

The folks in DeSantis Country can’t wait to get to you, Chaya, after they finish with the people you hate too. 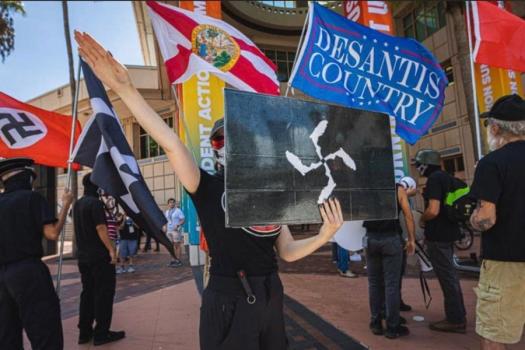 Typical. She labels innocent people as “groomers” but makes herself out to be the victim.

Then she started spouting hate toward Black victims of police violence before repeatedly depicting queer and trans people as predators who endangered children.

And THIS BITCH is Jewish!

Did she complain about the fact that DeSantis’s state party is full of open neonazis? As in, not just fascists, but Holocaust deniers. No? Didn’t think so.

You know, I grew up never trusting authority figures… including anyone involved in politics. And throughout the years, I’ve tried to mellow my views on that. But, boy-o-boy, I never thought we’d see elected officials sink this fucking low. I mean, it was one thing when they just completely ignored the AIDS crisis, but now elected Republicans are openly, gleefully, and without any blowback, ginning up maniacs to go out and murder us. And the elected officials on the left just kinda go, “Man, this awful. I’ll write a strongly worded kumbaya tweet about this, and that’ll be my due diligence.”

One thought on “Libs Of TikTok Creator: DeSantis Offered Me Protection – JMG”