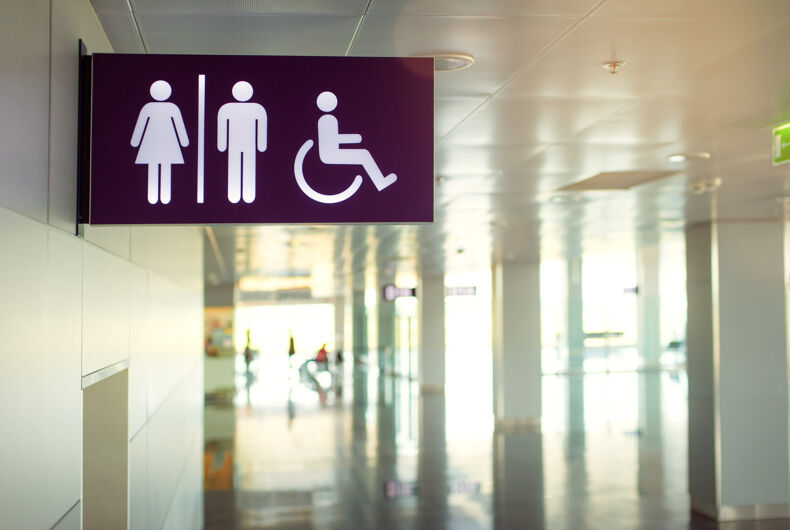 A cisgender female cancer survivor who had her breasts removed said that public restroom users regularly challenge her gender, making her nervous about such confrontations.

Tiffany Liles-Taylor — a 43-year-old lesbian woman from the English town of Enderby, Leicestershire, about 96 miles north of London — was diagnosed with breast cancer and had a double mastectomy in 2020.

“I’ve had to carry around these really heavy things my whole life,” she told ITV. “I was in my forties and they were starting to get droopy anyway – so I thought ‘these can go’.”

After a long recovery, she returned to work as a ward clerk in a local hospital in spring 2021. However, the short-haired woman now finds that she’s regularly misgendered.

She said that she gets called “Timothy” more than “Tiffany” and has high social anxiety because she has short hair and is quite masculine, causing others to assume that she’s a guy when they see her together with her wife.

“Public toilets are very stressful because people will always challenge me whenever I go in,” she said. “They will ask me if I’m in the right toilet, or get members of staff to question why I’m there— to which I have to constantly explain that I had cancer, not a sex change.”

“It’s that confrontation that I hate. I want people to understand that I am a woman, and I am in the right place,” she added.

When she wears clothing or wigs that are commonly seen as more feminine, she says she still gets mistreated because the clothes make her feel inauthentic and uncomfortable.

England has laws allowing public accommodation access for LGBTQ+ people and forbidding discrimination against queers. But even such legal protections can’t stop misgendering and harassment from ignorant individuals.

Liles-Taylor isn’t the only cis female who has been harassed in a public restroom for her gender presentation.

In November, a young cis woman with short hair recorded another woman harassing her in the public restroom of the Rampart Casino in Las Vegas, Nevada because the woman assumed she was transgender.

In the U.S., right-wingers have created a panic about trans individuals using public bathrooms, claiming that trans people are sexual predators and that public accommodation laws allow them to sexually harm women and children. In reality, the vast majority of sexual assaults are committed by cisgender men and women.