The important information is that the rushing kids to be trans myth is disproven, the trans population is still a small subset of the LGBTQ+ group.   The right uses emotion to drive fear because the data simply debunks and destroys their positions.    Hugs 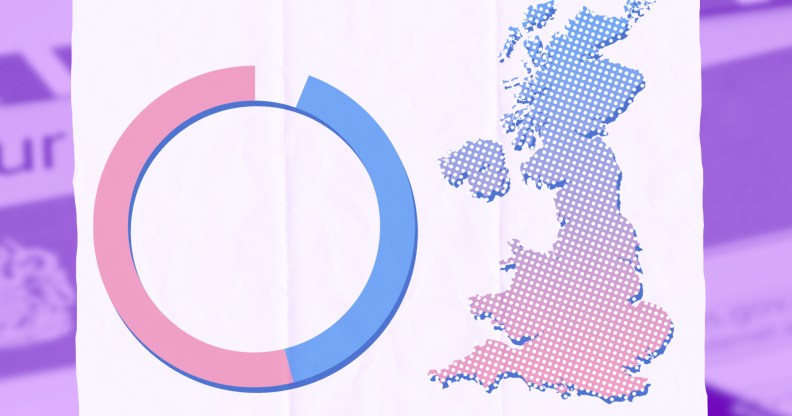 New census data for England and Wales should put a stop to the “anti-trans moral panic”. (PinkNews/Getty)

New census data revealing the size of the trans population should be used to combat anti-trans rhetoric and to secure vital resources for the community, experts have said.

The Office for National Statistics (ONS) released first-of-its-kind census data on sexual orientation and gender identity in England and Wales on Friday (6 January).

Around 1.5 million people (3.2 per cent) identified themselves as gay, lesbian, bisexual or as another sexual orientation, while 262,000 (0.5 per cent) said their gender identity was not the same as the sex they were assigned at birth.

The figures also found an equal number of trans men and trans women in England and Wales (48,000 in each group), while 30,000 identified themselves as non-binary.

Stonewall CEO Nancy Kelley called the data “significant” and said the small size of the trans population should put to bed “fake narratives”.

“It’s such a small population – the negative obsession we’ve got with it nationally, it’s just not justified on the basis of these numbers,” Kelley said.

“Politicians and particularly the media have been part of creating this environment which is so hostile for trans people and frankly so dangerous for trans people. This data should be a moment for everybody to step back from that and calm down.

“This is an important but small population and there is no evidence here that justifies this obsessive negative focus in our national conversation. We should get on with supporting trans people to thrive in their day to day lives.”

She added that the census data proves anti-trans “social contagion” rhetoric is wrong.

Some anti-trans figures have claimed an increase in people who’ve come out as trans is down to a “contagion”, rather than because society is more accepting and understanding of trans identities.

“It’s really significant data. It’s important in terms of the moral panic we find ourselves in and should act as a bit of a corrective about that,” Kelley said.

0.5 per cent isn’t a huge number until you think that that’s one in every couple of hundred people in every village, every town.

Cleo Madeleine, communications officer at trans charity Gendered Intelligence, said the fact that the data has been collected in the first place proves once and for all that trans people are “part of the social fabric in England and Wales”.

“It is undeniable now by any stretch that trans people exist and that we need resources,” she told PinkNews.

“0.5 per cent isn’t a huge number until you think that that’s one in every couple of hundred people in every village, every town. If you look at some places in London – places like Norwich, Leicester, Brighton – that’s going up to 1 in 100.

“We’re really talking about quite a substantial chunk of the population when it comes to things like allocation of resources, community spaces, support services, and I really hope – I know it’s not that optimistic with the political situation – but I certainly hope that this recognition is the start of better formal recognition of the need for service for support for trans people.”

The statistics also show the need for legal recognition for non-binary gender identities, Madeleine said. As well as the 30,000 people who said they are non-binary, 118,000 said their gender was not the same as their sex registered at birth, but didn’t give any specifics.

“To see that there’s potentially tens of thousands, if not hundreds of thousands, of non-binary people in the UK is an undeniable case for proper legal recognition,” Madeleine said.

While many are celebrating the release of the data, Madeleine also points out that many trans and non-binary people will be anxious about how the government and local authorities will use it.

“There’s such a climate at the moment of something like toxic visibility where trans people are talked about constantly, and that constant visibility is used to the detriment of trans people.

“I think there’s a lot of worry that these statistics might be used for something similar, but of course only time will tell on that.”

The question on sexual orientation was optional, but well over 90 per cent of people opted to answer it.

As far as Kelley sees it, the actual number of LGBTQ+ people in England and Wales is likely even higher than the official figure because not everybody will have felt comfortable answering questions on their identity.

“It is absolutely fair to assume that some of the people who chose not to answer the question are people who are not straight,” she says.

We want a government that genuinely governs with compassion and with the needs and the experiences of all of its citizens at its heart.

Having said that, the figures are “pretty much in line” with what Stonewall had expected them to be.

While there’s still some division and debate about the ways the ONS went about collecting the data, the census figures prove once and for all that queer people are part of communities all across England and Wales. That should be celebrated, Kelley says.

“We’ve been counted because we matter,” Kelley says.