Ducey: A GOP senator with white nationalist ties is ‘still better than’ a Democrat 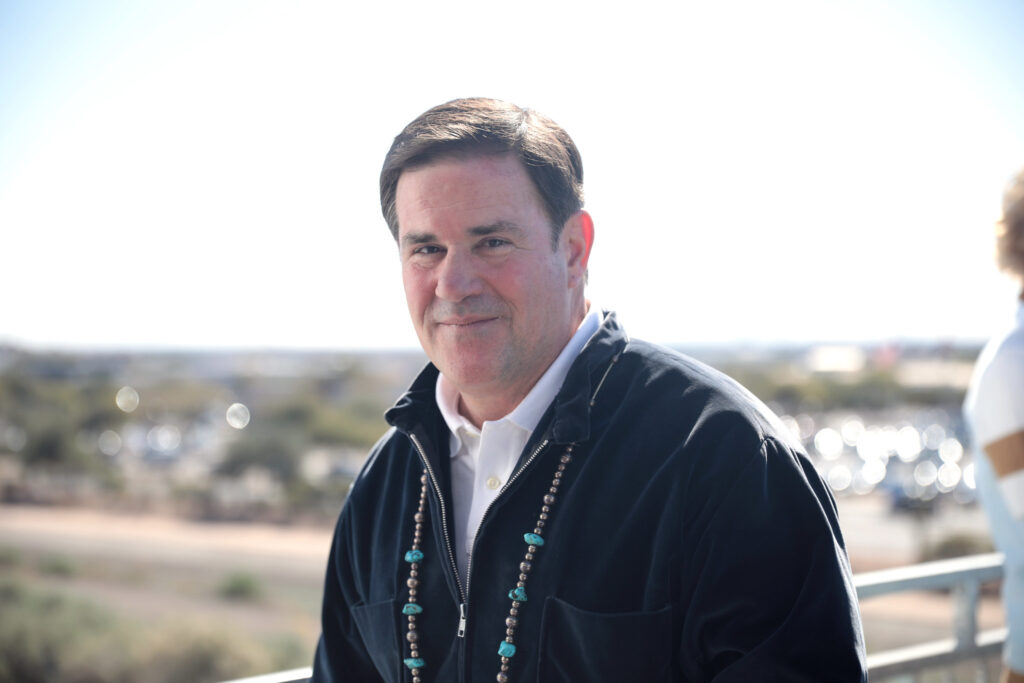 Gov. Doug Ducey said he has no regrets about spending $500,000 to elect a Republican state senator with open ties to the white nationalist movement because it’s still better than having a Democrat in her seat.

“I’m proud of what we’ve been able to accomplish. And she’s still better than her opponent, Felicia French,” he said Thursday.

Ducey’s political action committee, Arizonans for Strong Leadership, spent millions in 2020 to help the GOP maintain control of the legislature, including nearly $500,000 to help Republican Wendy Rogers win the race for the District 6 Senate seat in northern Arizona. Rogers won nearly 55% of the vote against Democrat Felicia French, a victory that kept the Senate in GOP hands by a single vote.

Since taking office, Rogers has become known for openly embracing the white nationalist wing of the Republican Party, including the “groyper” movement. That movement emerged after the deadly “Unite the Right” rally in Charlottesville, Va., in 2017, with the goal of pushing the GOP further into the white nationalists orbit and making the movement’s far-right views more acceptable to the American mainstream.

One of the leaders of the groyper movement is Nick Fuentes, a Holocaust denier with a history of making racist and anti-Semitic remarks. Rogers is openly supportive of Fuentes, and was listed as a speaker at his America First Political Action Conference III this weekend.

Asked if he’s still happy with his decision to aid Rogers’ campaign, Ducey on Thursday emphasized to reporters that he needs a governing majority in the legislature. Republicans have only a 16-14 majority in the Senate, which would have become a 15-15 split had Rogers lost her race.

Asked for his thoughts on the wing of the Republican Party that Rogers represents, Ducey reiterated, “She’s better than Felicia French.”

French spent 32 years in the Army and Arizona National Guard, where she worked her way up from private to colonel. A registered nurse, she is a veteran of the war in Afghanistan and has worked as a medical evacuation helicopter pilot.

Rogers tweeted her appreciation to Ducey after a video of the governor’s comments began circulating on Twitter.

“Thank you, Governor,” she wrote.

Rogers served in the Air Force, and retired as a lieutenant colonel. She was one of the first 100 female Air Force pilots.

Arizona state Rep. Wendy Rogers admits to pushing the Big Lie and other right-wing conspiracies in order to move "the Overton Window" in an effort to make her radical right-wing views more mainstream. https://t.co/coqu42cUuF pic.twitter.com/GcbnmFnLuK

Had a great time speaking to the Cottonwood Oathkeepers tonight. I am a member of the Oathkeepers and I really like their dedication to our Constitution and to our country. Thank you for having me! pic.twitter.com/7CCBY77tQg

Some of these liberal journalists have been super respectful to me. While we disagree they try to be unbiased even though I know they aren't, they still try. But others are straight up attack dogs for Soros. Oppo digging thugs. The latter need to be run out of Arizona.

Ban the Arizona Mirror from all events. They are oppo research agents for Soros.

Putin is Russia First. I am America First. Most of the European leaders are globo Satanic bankers first.

I truly think I am going to hire Lin Wood to sue you and @brahmresnik. Lin is the best defamation lawyer in the NATION. Be ready. https://t.co/OrcFXR0MPN

.@brahmresnik is vile scum calling me a white nationalist. Racist and anti-Christian. He hates Christian Americans. He is a Canadian. Go back to Canada, Brahm. The worst loser in the entire state.