Thanks to Randy for sending me this story. 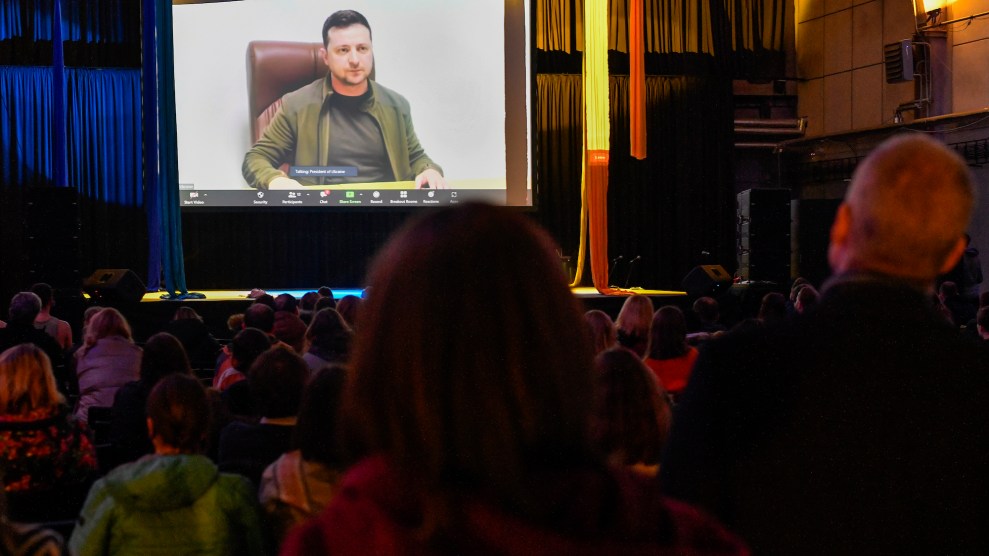 Viewers watch the speech of Ukrainian President Volodymyr Zelenskyy at an event in the Czech Republic on March 4, 2022.Photo/Miroslav Chaloupka (CTK via AP Images)

Fight disinformation. Get a daily recap of the facts that matter. Sign up for the free Mother Jones newsletter.

Ukrainian president Volodymyr Zelenskyy met with members of the US Congress Saturday morning to plead for more military help—he asked for either a no-fly zone over his country to protect it from Russian air attacks, or shipments of planes. While Congressional leadership praised the meeting, it seems to have had all of the hiccups you might expect from a Zoom call involving dozens of aging, tech-inept, publicity-hungry American politicians.

The event was, of course, an opportunity for members of Congress to brag about their involvement in the crisis: Members of both parties posted pictures of themselves participating in the call and even sending side-messages to Zelenskyy, who appeared unshaven and wearing an army green t-shirt as he spoke about the need for military assistance.

Just got off a call with @ZelenskyyUa. His heroism & the bravery of the Ukrainian people have become an inspiration to the world. The US needs to immediately step up to make sure they have the jets and weapons they need, & to impose an oil & gas embargo to disrupt Putin's war. pic.twitter.com/LQEVSzecQc

But GOP senators Marco Rubio, of Florida, and Steve Daines, of Montana, were blasted by some of their colleagues for doing their bragging in a real-time—something that members of Congress were specifically asked not to do to ensure Zelenskyy’s safety.

The Ukrainian Ambassador very intentionally asked each of us on the zoom to NOT share anything on social media during the meeting to protect the security of President Zelenskyy. Appalling and reckless ignorance by two US Senators. https://t.co/geolhKxbLp

At one point during his emotional presentation, Zelensky paused to ask one of the American lawmakers to mute themselves.
“Senator Rick Scott, please mute your mic,” he said. https://t.co/ElfsEAtQ4y