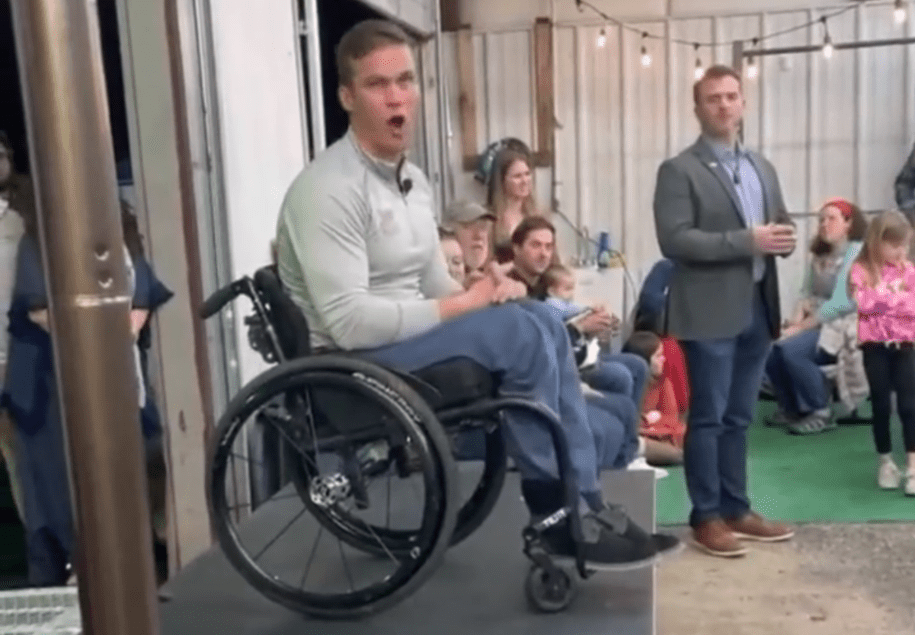 Republican Rep. Madison Cawthorn is to Congress as Republican Rep. Lauren Boebert is to Congress: reprehensible. This past week, Cawthorn was recorded telling an audience that Ukraine’s President Volodymyr Zelenskyy was “a thug,” and the Ukrainian government was “evil.” His willingness to boldly, inarticulately, and ignorantly say idiotic and offensive things is arguably his only talent.

On Friday, a new video surfaced of Rep. Cawthorn stumping away in front of a GOP-friendly audience. The clip is from a section where Cawthorn goes after Speaker of the House Nancy Pelosi. Pelosi has been a favorite target of the right for decades and Cawthorn choosing to use one of the leaders of the Democratic Party as a focal point for an attack isn’t new or surprising. The fact that Cawthorn’s attack on Pelosi is baseless isn’t even newsworthy, as most political attacks from the right these days are based almost entirely in a make-believe world of ‘deep state’ fake news controlled by Hillary Clinton and Barack Obama and George Soros.

What is newsworthy is that Rep. Madison Cawthorn of North Carolina apparently decided to slander Speaker Pelosi in a way that truly begs the question: What the hell is going on with Madison Cawthorn?

In the video, Cawthorn makes the partisan hack joke that Nancy Pelosi only has rules for others, and not for herself (likely something connected to the MAGA-bugaboo of mask mandates). He then jokes, “I’ll tell you, I have to work with her every day so please do pray for me.” He gets a light spatter of laughter as the audience realizes this is the high level of humor they’re going to get during today’s speech from this racist asshole.

But then Cawthorn says this: “The theories of alcoholism are very true and it’s very sad.” Cawthorn seems to be referencing “theories” that were not simply debunked but proven impossible. The Theories date back to the summer of 2020 when a doctored video of Pelosi, which slowed down her speech to make her sound drunk and slurred, was posted on Facebook and went viral among the kind of people Madison Cawthorn likes to fundraise off of. According to the Tampa Bay Times, Speaker Pelosi doesn’t drink but conservatives have spread the rumor that she was into drinking—not unlike a former Republican speaker of the House.

What is going on with Madison Cawthorn? This is the kind of truly wild and baseless claim that falls under most legal definitions of slander. Unlike parody, this statement by Cawthorn, after specifically referencing that he works with Pelosi “every day,” suggests he has real information that Nancy Pelosi has a substance abuse problem with alcohol. The joke Cawthorn made about Pelosi was not that she was drunk, but that she was Nancy Pelosi and Republicans dislike Nancy Pelosi and her elitism and therefore you need to pray for Madison Cawthorn to have the patience to work with such an insufferable person. Subsequently saying that the “theories” of her alcoholism are “very true and very sad” is saying she is literally an alcoholic.

Politics is one of the many professions that attracts pathological narcissists. Recent years have shown that some of those narcissists have a tendency to not simply be liars but to project their deepest anxieties and darknesses upon others. Cawthorn’s relentless statements about Democratic officials and Democrats in general do make one wonder: What the hell is going on with Madison Cawthorn?

This is just one more reason on top of many well-logged reasons that show why Rep. Madison Cawthorn should not be in Congress.

10 thoughts on “Rep. Madison Cawthorn crosses all the way into slandering Nancy Pelosi in latest video”