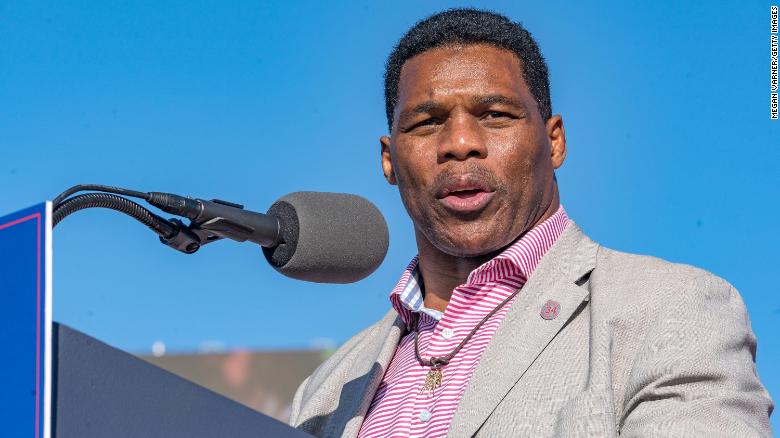 Former Heisman Trophy winner and candidate for US Senate Herschel Walker (R-GA) speaks to supporters of former President Donald Trump during a rally on March 26, 2022 in Commerce, Georgia.

For years, Herschel Walker has told the same inspiring story: that he graduated in the top 1% of his class at the University of Georgia. He’s told the story, according to a review of his speeches by CNN’s KFile, during motivational speeches over the years and as recently as 2017. The only problem: it’s not true.

Walker, who is a candidate in the Republican primary race for US Senate in Georgia, acknowledged in December that he did not graduate from Georgia after the Atlanta-Journal Constitution first reported that the false claim was listed on his campaign website.
But a CNN KFile review found that Walker himself has been repeating the claim for years. Walker’s comments in 2017, and others made over the years, show the former football star repeatedly misrepresented his academic credentials.
“And all of sudden I started going to the library, getting books, standing in front of a mirror reading to myself,” Walker said in a 2017 motivational speech. “So that Herschel that all the kids said was retarded become valedictorian of his class. Graduated University of Georgia in the top 1% of his class.”
Walker also made the claim in another interview in 2017.
“I also was in the top 1% of my graduating class of college,” Walker told Sirius XM radio.
Walker did not graduate from Georgia, where he was a star running back after entering as a prized high school recruit. A profile of Walker from 1982 in the Christian-Science Monitor and an article in The New York Times said he maintained a B average at the school. Walker himself told The Chicago Tribune in 1985 he maintained a 3.0 before his grades dropped. He left to play professional football before graduating and, though having repeatedly said he was returning to obtain his degree, he never received a diploma.
The Walker campaign did not provide proof of Walker’s claims when asked by CNN, but they defended his record as a professional athlete.
Walker is endorsed by former President Donald Trump and is expected to be the Republican nominee to run against Democratic Sen. Raphael Warnock in November.
The claim was removed from his website between December and January, according to screenshots from the Internet Archive’s Wayback Machine.
That was not the only claim about Walker’s education that was adjusted on his website at the time. After a review of the revised site, CNN’s KFile found another little-noticed claim was removed that said Walker graduated valedictorian of his high school. The website now says that Walker graduated “top of his class.” The claim still remains on the Heisman Winners page for Walker.
While Walker was a top student at his high school and the president of the Beta Club — he maintained an “A” average to be in the school’s Beta Club — CNN’s KFile found no evidence he was the class valedictorian.
Walker has mentioned in numerous speeches over the years, including in the 2017 speech where he claimed to have graduated in the top 1% of his college class, and in his 2008 autobiography that he was class valedictorian at Johnson County High School. The street where Johnson County High School resides was officially renamed “Herschel Walker Drive” in 2017 in honor of Walker’s football achievements.
“If I’m proud of anything I did in my high school career, it’s what I did in the classroom that I reflect on and relish the most. I did more than just shed the “stupid” label placed on me as a result of my speech impediment. I shed it, erased it, and rewrote it with the titles: Beta Club president and class valedictorian,” wrote Walker in his 2008 “Breaking Free: My Life with Dissociative Identity Disorder.”
CNN’s KFile reviewed Walker’s high school yearbooks and coverage of him in local newspapers at the time.
According to the local newspaper The Wrightsville Headlight, at Walker’s 1980 graduation he was not given the award for the student with the highest GPA in any academic subject. He did tie with another student for a leadership award based on participation in clubs and his GPA, and won numerous awards that year for his football achievements. While Walker was one of the ceremony’s honor graduates, the article does not mention the school naming a valedictorian or a salutatorian.
A 15-year review of local press coverage did not find the school naming a valedictorian until 1994 — when the paper acknowledged the school was naming a valedictorian and salutatorian for the first time in “many years.”
Walker’s campaign did not provide evidence that Walker graduated as his high school’s valedictorian other than pointing to news articles from the early 1980s after he began his career at the University of Georgia making the claim.
“There is not a single voter in Georgia who believes that whether Herschel graduated at the ‘top of his class’ or as Valedictorian 40 years ago has any bearing on his ability to be a great United States Senator,” Mallory Blount, communications director for the campaign, said in a statement.
The campaign also did not provide an explanation for why it removed the claim that Walker was valedictorian from his website. When repeatedly asked if the campaign stood by the since-removed claim from his website, the Walker’s campaign manager Scott Paradise sent the same statement three times in a row which did not address KFile’s questions.
“Multiple reporters wrote about this 40 years ago. If you have a problem with what they wrote, please contact them. If you have a difficult time getting in touch with them, ask yourself why you are asking such a stupid question,” said Paradise to CNN.
Johnson County Schools declined to comment and directed questions to Walker’s campaign when asked if they named a valedictorian that year or if Walker was the top student.

It’s unclear when Walker began claiming he graduated from Georgia, and press accounts began listing him as returning to get his degree as early as 1983 after he left to join the United States Football League, a rival to the National Football League in the 1980s. Walker joined the New Jersey Generals, which was owned by then-businessman Trump. Over the years, Walker repeatedly told interviewers he had gone back to Georgia during the off-season to take classes. A 1986 article from The Dallas Morning News on his football career states Walker completed his degree in criminal justice and features a quote from Walker talking about his degree.
“Getting a degree is one of the paths you can take on the way to becoming an FBI man,” Walker said. “Of course, my life is not going in that direction right now, but I think police work, especially the FBI, would be my choice if I wasn’t a pro football player.”
Speaking on a YouTube show in 2008, following the release of his book, Walker told the interviewer he went back to get his college degree from University of Georgia
“You know it was said whether I leave or stay in school. It came up that I leave — and what was weird about that is people said, ‘Why would you leave college so early?’ And that’s like guys, ‘I went back to get my degree which is what you’re supposed to do.'”
Press reports from the time of the book’s publication listed Walker’s website for his book and subsequent speaking on mental health as HerschelWalker.net — which also said Walker returned to college and completed his degree.
The claim is brought up in interviews with Walker, on at least two separate occasions — with the host saying he returned to get his degree. In neither instance did Walker correct interviewers.

Is it really news that a Republican running for office lies constantly?   I thought that was their standard operating procedure.

.@KFILE also found no evidence for Walker's claim, on his website and in his autobiography, that he was high school valedictorian: https://t.co/AG6taRKinD

When we noticed the claim was changed from "valedictorian" to "top of his class," we looked into the coverage of the graduation. Walker was not the top GPAed student in any subject, according to the now-defunct local paper.https://t.co/uCPQ7rnVnm pic.twitter.com/yZnYsqPFc2