There is two sections to this post, please look over both. 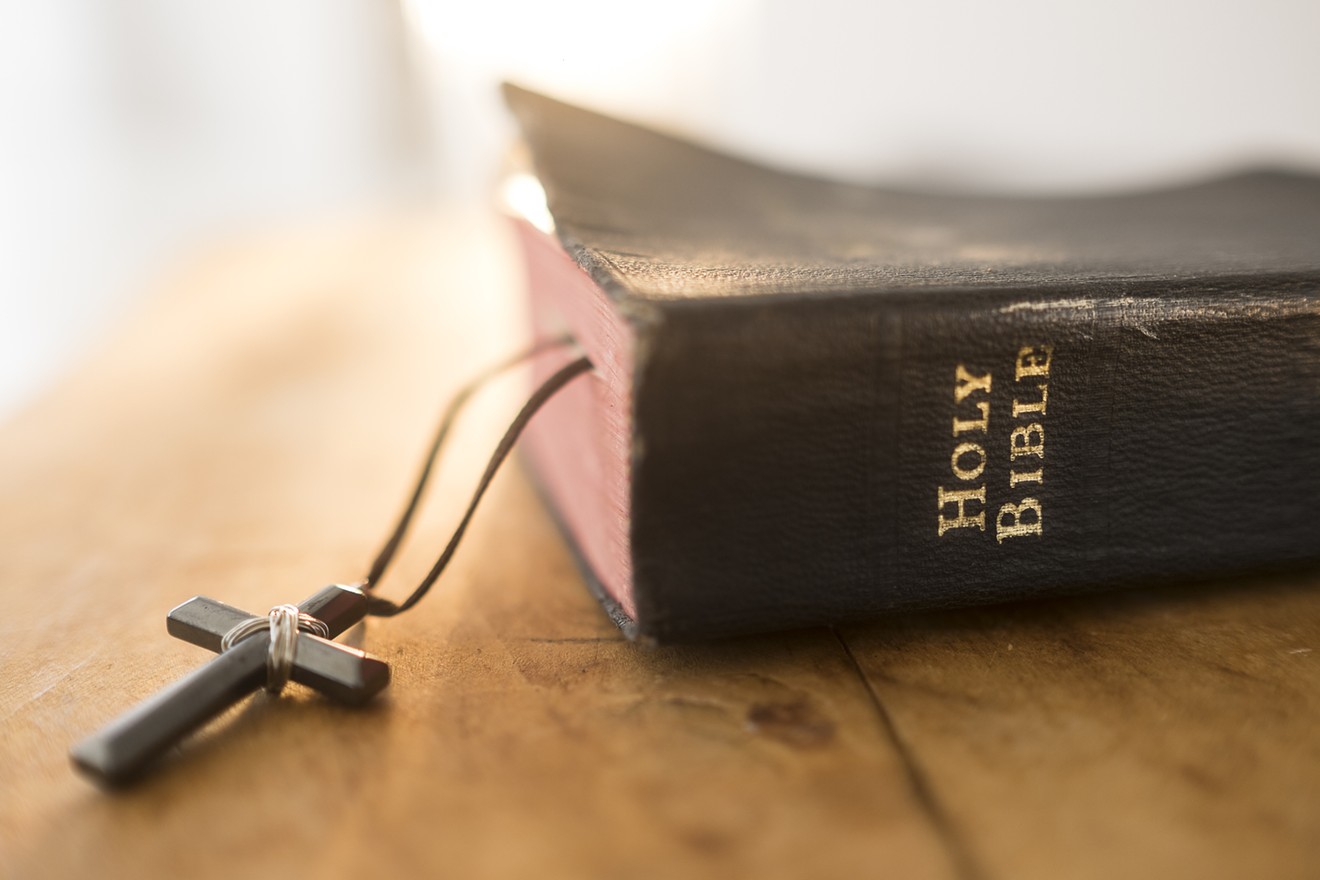 Chaz Stevens of Deerfield Beach has requested that Miami-Dade and Broward County public schools ban the Bible. Photo by Tetra Images/Getty Images
Since July of 2021, more than 200 books have been banned in various school districts across Florida, the state with the third-highest number of school book banning incidents in the U.S. This comes as the Florida legislature and Gov. Ron DeSantis have passed House Bill 1467, which allows members of the public to challenge and ban books available in school classrooms and libraries, and a swath of “anti-woke” legislation purportedly aimed at empowering parents to protect their children’s impressionable minds.

With that in mind, local political stunt activist Chaz Stevens of Deerfield Beach has taken it upon himself to add another book to the lengthy list: the Bible. This week, in letters sent to superintendents in eight school districts in Florida — including Miami-Dade County Public Schools (MDCPS) and Broward County Public Schools (BCPS) — Stevens, an avowed atheist, petitions the districts to ban the Christian Bible from classrooms and libraries, citing its inclusion of inappropriate topics.

“If they’re gonna ban books, then the whole library should be in play. My hope — and it’s a longshot — is that they will apply their own standards to themselves and ban the Bible,” Stevens tells New Times.

Free-speech and literary-expression advocates have been sounding the alarm about what they see as a bureaucratic, authoritarian attack on education in Florida, particularly after recent news that the state rejected 54 math textbooks from the curriculum for allegedly containing prohibited topics such as “Critical Race Theory.” When the state went so far as banning math books, Stevens says, he was inspired to use the same bureaucracy to strike back against the conservative wave with an operation he calls “Eff Off Jesus.”
“I wish to file such an objection, requesting the Miami-Dade County Public School system immediately remove the Bible from the classroom, library, and any instructional material,” Stevens writes in his request addressed to MDCPS Superintendent Jose Dotres on April 19. “And, as is often the case with banned books, I ask your agency lay flame to that giant stack of fiction in a pyre worthy of a Viking sendoff.”

Stevens cites age inappropriateness, social-emotional learning, mentions of bestiality and rape, and “wokeness” as reasons to ban the Bible. Each reason is accompanied by a corresponding Bible excerpt. (A copy of Stevens’ letter is attached at the end of this article).

“With the constant babbling concerns about teaching Critical Race Theory, should we not take stock of the Bible’s position on slavery? I am concerned our young white students will read such passages and wake up to civilization’s sordid past,” Stevens writes, followed by a passage from Ephesians that speaks of slaves and servants obeying their masters.

BCPS Superintendent Vickie L. Cartwright’s office could not immediately comment as to whether the agency received the request and how it intended to address it.

“They better not fucking ignore me,” Stevens warns. “If they ignore me, doesn’t that tell you something? The government can’t pick and choose religion, but can they choose which books they review for banning and which ones they don’t?”

Personally, I don’t think many religious people know what is in their bible and they will fight tooth and nail that it is fake when presented with it.

Since July of 2021, more than 200 books have been banned in various school districts across Florida, the state with the third-highest number of school book banning incidents in the U.S. With that in mind, local political stunt activist Chaz Stevens of Deerfield Beach has taken it upon himself to add another book to the lengthy list: the Bible.

Stevens cites age inappropriateness, social-emotional learning, mentions of bestiality and rape, and “wokeness” as reasons to ban the Bible. Each reason is accompanied by a corresponding Bible excerpt.

Stevens first appeared on JMG in 2013 when his Pabst Blue Ribbon beer cans Festivus pole went on display in the Florida Capitol.

We heard from him again in 2015 when he applied to place a rainbow Festivus pole topped with a mirror ball at the Arkansas Capitol.

Also in 2015, he was approved to place a similar rainbow Festivus pole at the Florida Capitol.

Stevens has fought to have “Satanic prayers” included among Christian invocations at county commission meetings.

An atheist in Florida finally introduced a formal petition to ban the Bible in some schools. And the logic makes perfect sense: if you’re going to ban books for having adult/inappropriate content, you have to start with the Bible, which has rape, slavery, genocide, and much more.

As Florida is ramping up its book banning push — going so far as to ban "woke" math texts in schools, a South Florida atheist wants to add another book to the ban pile: The Christian Biblehttps://t.co/D1IXV1051w

Moist Kitty • an hour ago

But Christian rape is rape granted from baby Jeebus himself! No way the fascist republicans allow the Bible to be cancelled

Bert_Bauer Moist Kitty • an hour ago

Remember, conservatives don’t believe in rape. In their mindset, women are: 1. Property of men, and; 2. Asking for it by going outside their houses, showing any skin, being in public after sundown, etc.

What can be more wholesome than this:

“For she doted upon their paramours, whose flesh is as the flesh of asses, and whose issue is like the issue of horses.” –Ezekiel 23:20

Ya love that juicy little tidbit where two daughter’s get daddy drunk and then have sex with him .Good wholesome family fun Hey death sentences Stuff that in your ditty bag

Why don’t we hear Evilgelicals complaining about not being able to bash babies upon the rocks? PSALM 137:9

Ezekiel 23:20 – There she lusted after her lovers, whose genitals were like those of donkeys and whose emission was like that of horses.

1 Samuel 18:25 – Saul replied, “Say to David, ‘The king wants no other price for the bride than a hundred Philistine foreskins, to take revenge on his enemies.’” Saul’s plan was to have David fall by the hands of the Philistines.

1 Samuel 18:27 – David took his men with him and went out and killed two hundred Philistines and brought back their foreskins. They counted out the full number to the king so that David might become the king’s son-in-law. Then Saul gave him his daughter Michal in marriage.

For the anti-abortion folks, I recommend this lovely little passage. Oopsie!

Hosea 13:16 – The people of Samaria must bear their guilt, because they have rebelled against their God. They will fall by the sword; their little ones will be dashed to the ground, their pregnant women ripped open.

Don’t forget the part where Lot’s daughters get him drunk, ride him reverse double cowgirl and get knocked up with his special seed!