And it starts.   We knew this was coming.   Doesn’t he realize his own marriage is also going to be illegal if we return to the 1950’s?   These wealthy or religious people on the court don’t think the police are bad because they won’t be affected by bad cops, like congress they won’t be affected by the rulings they make.   These people have the idea that they are the elite and are above the laws the laws the rest of us must follow   Why would they worry about guns flooding the country, the first-time people peacefully protested near their homes they got congress to immediately pass a law against it enforced by the very police they constantly protect from any civilian threats, even though congress cannot pass laws that protect school kids from mass shootings.   9 court justices got a law passed right away no delay; many kids killed so what.   This is no longer a country governed by the people for the people, it is corporations ruling over government to support profit at all costs.    Ron and I have made sure our passports are up to date and we will be using our funds to move as soon as sex between consenting same sex couples are illegal and our marriage becomes a joke in Florida, the home of the desperate to president maga “Don’t say gay” attack Disney for being too tolerant DeathSantis makes us gays illegal.   Oh yes that is the same DeathSantis that recently tried to say with a straight face that Florida wouldn’t tolerate attacks on gay people as he celebrated the Pulse night club massacre.   This is on every tRump voter.   This is on every Republican voter.    This is on every religious person who voted for the Republican over the Democrat.    Thank you to each and every one of you for rolling the country back to the 1950s to enjoy your superiority.   Now give up your cell phones, smart TV’s, internet, GPS, and all the science advances, give up all the medical advances, just go back to live in that regressive world you assholes because you don’t deserve to live with the rest of us.   Thanks for putting the rights of others on the chopping block so you could have your god in everyone’s life and your fucking tax breaks so corporations and wealthy people pay nothing while the public work 3 or 4 jobs 60 to 80 hours a week to pay the corporate rent and buy food to eat.   Fuck this country.   By the way think you are a citizen because you were born in the US, that is also on the chopping block that many hard right conservatives want to get rid of.       Hugs 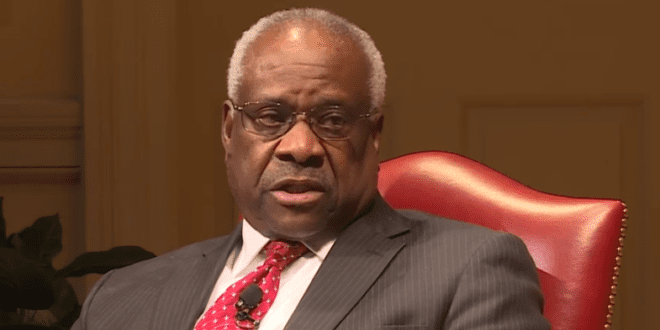 Thus, I agree that “[n]othing in [the Court’s] opinion should be understood to cast doubt on precedents that do not concern abortion.” Ante, at 66.

For that reason, in future cases, we should reconsider all of this Court’s substantive due process precedents, including Griswold, Lawrence, and Obergefell.

Clarence Thomas writes, in a concurring opinion, that the Supreme Court should reconsider Griswold, Lawrence, and Obergefell — the rulings that now protect contraception, same-sex relationships, and same-sex marriage.

Curiously, no mention of “Loving v. Virginia.” How convenient for him and Ginni.

Gregory In Seattle Elagabalus • 39 minutes ago

Honestly, I don’t think he cares. Republicans are so blinded by their hate that they never think through how their actions might somehow affect themselves.

Ed B Elagabalus • 2 hours ago

That doesn’t mean someone or some group won’t try to overturn that. Remember, the conservative majority doesn’t *need* Thomas to accomplish its goals.

We have it in us. Everyone else, join us or get the fuck out of our way.