And so the erasing of same sex couples begins.  Just students know that a teacher is married to someone of the same gender is now forbidden in Florida.  How does this protect children?   It does clearly make gay married teachers a lower class of people than straight married teachers.   What next limiting benefits to gay married teachers or just making it illegal to have gay teachers?   WTF, I am going out of my mind that the US in a few short years snapped back into a theocracy.     Hugs 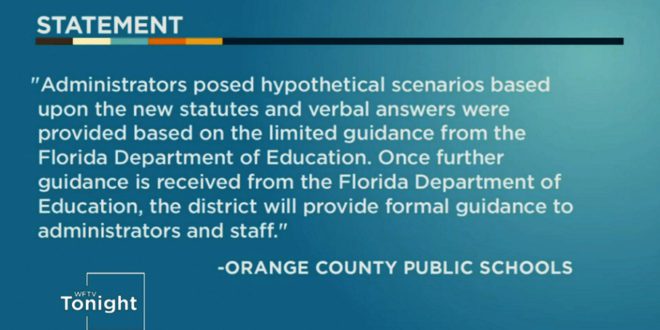 According to representatives of the county’s teacher association, teachers and staff members will be disallowed from wearing rainbow articles of clothing, including lanyards distributed by the district last year. Elementary-level teachers reported being discouraged from putting pictures of their same-sex spouse on their desk or talking about them to students.

“Safe Space” stickers aimed at LGBTQ students may have to be removed from doors, teachers will have to report to parents if a student “comes out” to them and they must use pronouns assigned at birth, regardless of what the parents allow, the CTA reported.

"teachers and staff members will be disallowed from wearing rainbow articles of clothing, including lanyards distributed by the district last year… teachers reported being discouraged from putting pictures of their same-sex spouse on their desk"https://t.co/rGqqNeeKQn

We all knew this would happen. I’d love to hear how all the straight teachers are being told to remove their partners pictures from their desks.

Florida has no law barring such discrimination nor does the federal government. There’s no basis for such a suit and should it actually go into court the current right wing courts will rule against us. This is why we are so fucked and this is just the beginning.

Wait until you can’t put photos of interracial spouses or family on your desk because CRT is bad y’all.

Give it time. If Thomas gets his no ‘substantive due process’ case, that would undermine Loving. And there’s cases every year about one wedding or another not allowing an interracial couple to celebrate there – and the venues do win the cases if they are sufficiently private.

Wow.
Florida is an object lesson on how to fuck up education.
In Europe this is memory of fascism stuff.

Hear, fucking, hear. I think a lot of Americans, including people on this forum, really haven’t grappled with what’s happening. For all the country’s history of injustice against Blacks, Native people, women and LGBT people, most of us have only ever known life in a nation of democracy, freedom and rule of law.

We’re now entering a phase of history that people in Europe and other countries such as Chile have already seen – where democracy, freedom and rule of law all collapse and are replaced with dictatorship, oppression and lawless rule by decree. It’s disorienting, like the sudden death of a loved one, and it takes a while to wrap your head around it and realize that what you have always known as normal is now gone.

I so totally agree.
It’s painful for us in Europe to see in real time the swing towards the extreme right wing of fascism.

I think there is a fear of filing lawsuits now given what SCOTUS has become.
It’s another way the bigots win without having to do anything.

Yup. They want to cripple public education so they can privatize and monetize it.

They already are. I am in a number of online groups for music teachers. They are leaving in droves. I guess the MSM will wait and report on this in September when schools can’t open for lack of teachers. (Always a day late and a dollar short our US excuse for journalism!) So it’s already bad, but yes this will make it worse.

The books that have been banned are like “And Tango Makes Three” showing two male parents and no sex. But stories like Goldilocks with a Mama Bear, Papa Bear and Baby Bear are not banned.

It is about indoctrinating their version of what a family looks like, what a couple looks like.

One thought on “Orlando Teachers Banned From Wearing Rainbow Items, Having Photos Of Same-Sex Spouses On Desks [VIDEO]”