And it happened again.   It is now clear that these groups are searching for drag events, which are totally legal and then attacking them shutting the down.   And again the police stood by and let it happen.   Thanks Republicans, the party of law and order, for returning the US to a time when marginalized groups can be targeted and harmed.   Hugs

A drag show at a Woodland bar celebrating the end of Pride month was disrupted Thursday night after a group showed up yelling homophobic slurs and threatening safety.

The owner of Mojo’s Lounge and Bar had canceled the event earlier in the evening due to safety concerns. Threats toward the venue and performers scheduled to be at the event had been circulating on social media for several weeks after details were picked up by a hateful group on social media, according to the owner.

As the group yelled hateful language, patrons waited as police surrounded the bar.  At some point, someone deployed pepper spray. Thursday night investigators are still working to figure out where it came from.

Read the full article. No arrests were made. 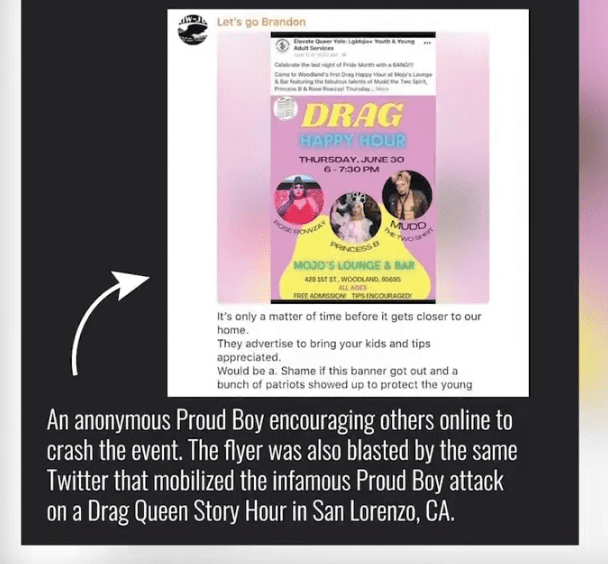 NOW | This is Woodland, CA. A drag show was canceled after safety concerns but after enough people turned out, organizers held a scaled down version. Then this group showed up. [Warning: There’s explicit language in this video] @kcranews pic.twitter.com/KA8B0ceg7z

The group is still going, yelling expletives, calling out the owner of the restaurant by name. pic.twitter.com/XSGZhgsKWE

8:39PM | This is not being filtered for language. pic.twitter.com/gua6uSnCGh

Alleged Proud Boys members attempt to get into The Mojo in Woodland, CA and are met with pepper spray. The bar had planned an all ages Drag Show tonight, which was postponed due to security concerns pic.twitter.com/7Boln64uJ6

Roughly a dozen people have gathered on the opposite sidewalk shouting insults to patrons and police pic.twitter.com/aCB7LSmzCm

In 1981 I was in a gay bar in a small red-neck California town- shouldn’t have been there as I was underage – but there I was. A group of straight guys came into the bar
and started to stir up shit. Me being pretty much a kid, I was terrified.

Then something happened that has stayed with me ever since. We followed in the footsteps of our elders at Stonewall and fought back. There really was nothing left to do but that…. those assholes got chased out of the bar and many blocks down the street , getting beat with fists and pool cue sticks.

I don’t like to have to say it, but I think it’s time we as a community go back to when we were willing to physically fight if need be. Having come so far, it’s horrible to have to take so many steps back, but that’s the reality of today.

I’m not prescient, but you don’t need to be to realize things are about to get a lot worse again before they get better.

“I’m not prescient, but you don’t need to be to realize things are about to get a lot worse again before they get better.”

I agree. The Proud Boys are just the loudest but there are many, many more groups just like them. And every time a Republican politician spouts anti-LGBT+ rhetoric they get emboldened. Everything that Proud Boy said was taken straight from the GOP’s rising ‘stars’ of politicians.

If QMaga gets into power, groups like The Proud Boys will only get stronger. And if nothing is done about it they will, eventually, be given official political legitimacy. Queer folk are criminalized and hunted down across the Middle East, Russia, Poland, in countries across Africa and elsewhere.

Do not think for a second it can’t happen in the US.

I don’t know your age, however you might not be old enough to remember the advance and decline of progress over the course of the last century. There are definitely objective indicators that we are entering a period when civil society is under attack, not just for us but also the other usual targets.

There was a major advance of gay acceptance in Germany just prior to the Nazi rise.

You’re right. Almost exactly 100 years ago and again in the 1980s there was dramatic improvement in personal freedoms. We are now at the next stage where bigotry becomes more prevalent.

The Reich Wing in US, UK, CAN, FRANCE is following the same script as the last time Fascism reared up. The parallels with the Nazis (and others) is very clear. Then, as now, one of the first targets was LGBT culture and people while amplifying existing religious intolerance.

This time we have the advantage of knowing the history of Fascism and can oppose it, if we remain aware.

Wake up. We must not ever again give way to their efforts to marginalize us.

WaveMotionGum Just a guy • 17 hours ago

Proud Boys was launched in 2016 and has only gotten more brazen with their violent confrontations. They are modern day brown shirts. https://en.wikipedia.org/wi…

Well they aren’t unarmed black men so the cops won’t do anything. But even I was surprised at how gentle the police were with those scumbags. They didn’t try to grab them or anything. It was just “Hey stay away from that door” without moving in to stop him from banging on it. Face it, the cops love the Proud Boys.

And why isn’t the FBI arresting arresting them? This is clearly domestic terrorism.

Because the proud boys are off-duty & former cops.

…after a group showed up yelling homophobic slurs and threatening safety.

You know… to protect the kids from bad influences.

This! Let’s tell obscenities and threaten violence because that’ll make kids agree with us!