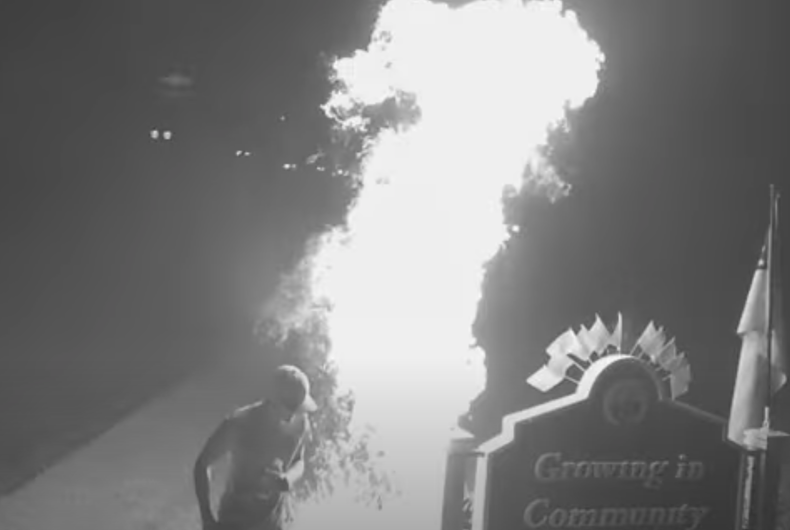 In Lansing, MI early Tuesday morning, a man was caught on surveillance video setting a Pride flag display on fire.

Security cameras recorded the man approaching the “Welcome to Lansing’s Eastside Neighborhoods” sign near the corner of East Michigan Avenue and South Mifflin Avenue. The sign is flanked to one side by a large American flag and on the other by a Pride flag. Smaller flags decorate the sign itself.

The perpetrator douses the Pride flag with a liquid substance then reaches into his pocket for a lighter and ignites it. He jumps back from the fireball and leaves the scene.

It’s the sixth incident of vandalism at the same site. Five Pride flags have been stolen and replaced at the location over the course of Pride month.

“I am beside myself,” said Ryan Kost, a candidate for the 1st Ward seat on the Lansing City Council in the Aug. 2 primary election. “The level of hate demonstrated by setting it on fire is incomprehensible.”

Openly gay At-Large Councilmember Peter Spadafore agreed. “I find it appalling and disgusting that someone would resort to using this sort of tactic to intimidate. I hope we are doing everything we can to find this perpetrator of hate.”

“Lansing doesn’t tolerate hate, and I hope this person is identified quickly,” said Lansing Mayor Andy Schor. “I am angry that someone would do this. This is not who we are as a community.”

Kost has filed a criminal report with the Lansing Police over the incidents. Mayor Schor got backup from the chief of police.

“The Lansing Police Department strives for every citizen to feel safe in the city of Lansing,” said Chief Ellery Sosebee. “Our goal is to assure the City of Lansing is a safe place to live work and visit for everyone, including the LGBTQ+ community. The Lansing Police Department will not tolerate any act of hate and intimidation and will seek the appropriate prosecution for any of these crimes.”

The charred Pride flag at the site has been replaced — for the sixth time.