Gingrich: Climate Change Is “A Bunch Of Lies” 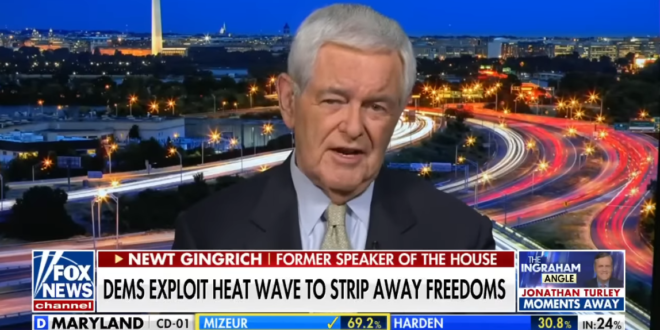 “Go back and take everything that Al Gore put in his movie, go through it step-by-step — it’s all a bunch of lies, it didn’t happen, it’s not true.

“And I think the elites are so frenzied, they all go to the same cocktail parties, they all talk to each other, they all come to an agreement that they’re going to say this nonsense and going to reinforce each other.

“The truth is, it’s false. Just as, by the way, the same elites were lying to us about COVID.” – Newt Gingrich, last night on Laura Ingraham’s show.

Firefighters in France, Spain, Greece and the UK battled on Tuesday to contain massive wildfires, while Portugal reported more than 1,000 heatwave-related deaths as Europe scorches. pic.twitter.com/R6DU1iamcH

A record-setting heat wave throughout Europe has caused the death of over 1,700 people in Spain and Portugal. https://t.co/W14NbvXqgO

Britain recorded its hottest day ever as a heatwave gripping Europe intensified. Temperatures exceeded 40C, or 104F, in the country and fires burned across London https://t.co/mbAflHVlCQ pic.twitter.com/Bs5LTyUGJU